12 Misspelt Songs By Artists Who Should Know Better

12 Misspelt Songs By Artists Who Should Know Better

Given the number of band members, producers, managers, record company hotshots and graphic designers who have a hand in bringing a song to the release stage, it’s hard to believe the major artists who have released music with a glitchy title. We’re not talking the sort of silly, purposeful titles beloved by Slade, Sly Stone and Prince here – this is a collection of genuine stuff-ups from hit performers. Sit up straight in the back, school is in session…

One of the many Aussie acts nurtured by late Mushroom Svengali Michael Gudinski, Frente! arrived on the early ‘90s indie scene with the Triple J-approved tracks "Labour Of Love" and "Ordinary Angels", before finding crossover success with their first official single, 1992’s "Accidently Kelly Street". Rather than being a band fuck-up, the spelling mistake in the title was put down to a Mushroom Records mistake during the single’s artwork production. Intriguingly, the band liked the look of the error on the single art and decided against correcting it to ‘Accidentally’. Frontwoman Angie Hart, just 20 years old at the time of the single hitting #4 in the ARIA singles chart, suggested in 2014 the mis-spelling “was not intentional on my part, but I quietly took the credit for years.” Perhaps Hart was correct when she noted some felt the error was “a genius stroke”: the band never managed another top-five single.

One of Michael Gudinski’s greatest success stories, ‘70s legends Skyhooks combined provocative glam attire with clever, sometimes ribald lyricism. Skyhooks bassist Greg Macainsh mustn’t have had a dictionary on hand when he penned 1978’s Guilty Until Proven Insane track "Meglomania", which suggested “there's a little bit of Adolf in everyone” Released following the departure of original Skyhooks guitarist Red Symons, "Meglomania" couldn’t match its predecessor "Women In Uniform"’s success and bowed at just #93 in the singles chart.  As for the inability to spell ‘megalomania’, Macainsh may well have answered anyone questioning the bungle with the title of the very next song on the album: "Why Dontcha All Get Fucked".

Fleetwood Mac were in a creative spiral following the departure of guitarist Lindsey Buckingham after the release of Tango In The Night in 1987, with the band’s belated 1990 follow-up, Behind The Mask, opening with this tedious Christine McVie song. Unlike its heavenly lyrical aspirations, the 1991 single never takes off, with the mistaken contraction of ‘sky is’ to ‘skies’ just one more mystifying moment from a very mystifying career. That it’s since turned up on The Very Best Of Fleetwood Mac suggests McVie still holds a candle for the turgid tune, which she co-wrote with her husband of the time, Eddy Quintela. 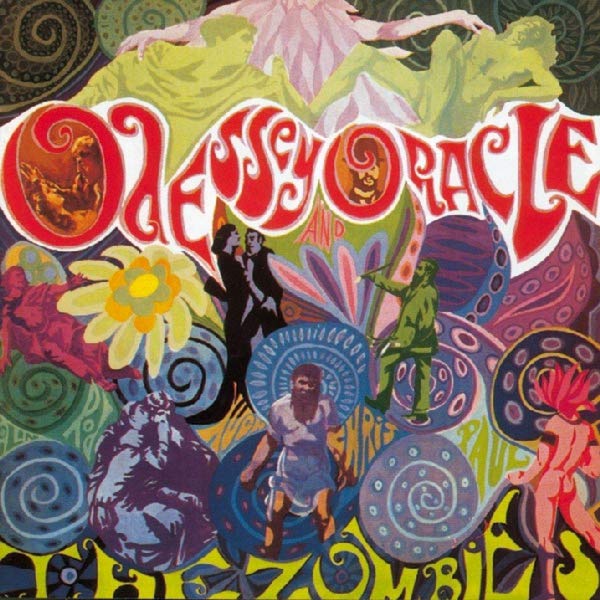 4. The Zombies - Odessey And Oracle

In this case, it wasn’t a song but actually a whole album that was accidentally misspelt. Odessey And Oracle, the 1968 album from The Zombies which harboured the hit "Time Of The Season", featured cover artwork that fitted perfectly with the psychedelic era in which it was unveiled. Unfortunately for graphic designer Terry Quirk, proofreading wasn’t his forte: he delivered the cosmic sleeve with the word 'Odyssey' misspelt. His childhood friend, Zombies singer Chris White, initially covered up his pal’s goof by suggesting the creative spelling was on purpose, but Quirk later admitted the misspelling was “my claim to fame. There are lots of theories online about why it’s spelt wrong, but there’s no conspiracy.” Quirk died in 2020 – five years after delivering a (perfectly spelt) cover for The Zombies’ reunion album Still Got That Hunger. 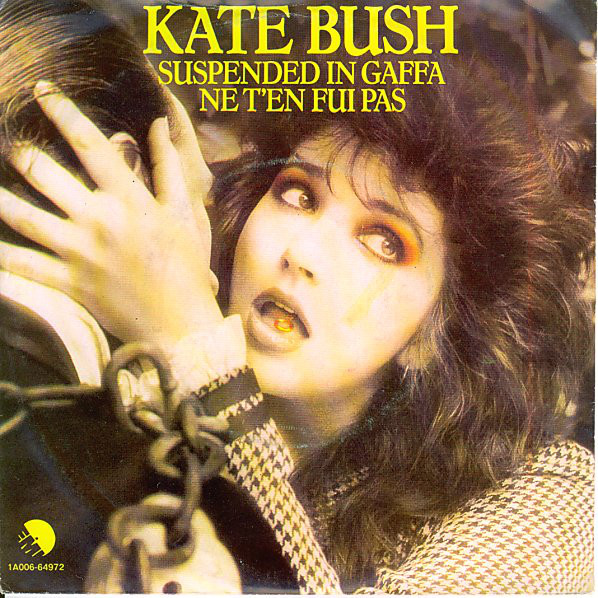 Be very careful when attempting to prove your bilingual capabilities: you’ll have the rest of your career to be reminded of your failings. Released in different territories as a B-side to 1982 singles "There Goes A Tenner" and "Suspended In Gaffa", this song was spelt as "Ne T’en Fui Pas" on all original pressings. It seems someone might have had a quiet word to Ms Bush about her inaccurate translation of the French term for ‘Don’t run away’ – by the time the song was remixed and released as an A-side in Canada and France a year later, the title had been corrected to "Ne T’enfuis Pais".

Just like the wonderful Catherine Bush, The Rolling Stones’ bassist formerly known as William Perks should probably have paid more attention in his high school French classes. In his autobiography Stone Alone Bill Wyman suggested his 1981 single "(Si Si) Je Suis Un Rock Star" “was a parody of myself as a recognised musician in exile in France; to the present day this remains the biggest solo hit by a Rolling Stone.” Don’t get too smug, Bill – Francophiles were quick to point out the correct term should have been "(Si Si) Je Suis Une Rock Star".

After neglecting her music career for four years while she pursued television success, in 1971 Cher returned to the charts with "Gypsys, Tramps And Thieves" – complete with a misspelling of ‘Gypsies'. The song, which reached the top five in the Australian singles chart, was originally titled "Gypsys And White Trash" by songwriter Bob Stone, but even a revision of the name failed to fix the spelling error. In the years since, the song has sometimes been corrected on Cher hits collections, with one 1994 compilation from MCA Records even taking the title The Best Of Cher – Gypsies, Tramps And Thieves while maintaining the "Gypsys, Tramps And Thieves" spelling on the opening track! See also Jimi Hendrix’s 1969-1970 group Band Of Gypsys for another failed attempt at spelling the ethnically-derogatory term.

It’s not just his political views that have caused Morrissey dramas over his 40-year career. The former frontman for The Smiths hasn’t always been as erudite one might expect for one so quick to namedrop Keats, Wilde and Yeats: his spelling mistake in "Cemetry Gates" is once such lapse. Thorough Smiths biographer Johnny Rogan notes the word ‘cemetery’ was also spelt incorrectly in the young Steven Morrissey's unpublished book draft Exit Smiling, a tome about lesser-known Hollywood stars. For another erroneous attempt at the word, you can also see Ramones’ "Pet Sematary", although you can blame that one on the fact their song was written for the film version of Stephen King’s novel.

Errr, we think you mean ‘you’re’ (you acid-fried goons).

By 1979 some suggested the mighty Led Zeppelin’s heart just wasn’t in it anymore – and on final studio album In Through The Out Door their spelling was also looking iffy. According to Led Zep biographers Jean-Michel Guesdon and Philippe Margotin, the track "South Bound Saurez" is a mistaken attempt at ‘Suarez’ – a word that could either refer to a Spanish word for party or alternatively references the Mexican city Ciudad Juárez. Jimmy Page was obviously aggrieved by the mistake enough to correct the song to "South Bound Suarez" on his website, but the 2015 reissues (and the streaming versions of the track) keep the historical spelling. It was the second time Zeppelin had stuffed up a location in their song titles. "Bron-Y Aur Stomp" on Led Zeppelin III was named after the Snowdonia cottage where it was first crafted, but the Welsh location was actually spelt 'Bron-Yr-Aur'. The band were able to somewhat remedy their inaccuracy when, on 1975’s Physical Graffiti, they included a similarly-titled acoustic instrumental "Bron-Yr-Aur", this time with the correct spelling.

David Bowie’s handwritten original lyric sheets for songs including "Fashion" and "Battle For Britain (The Letter)" show a laissez faire attitude to appropriate apostrophe usage, but this example actually relates to a geographical spelling error. Recorded in Germany with Brian Eno and Tony Visconti, "Heroes" instrumental "Neuköln" was named after the suburb to the east of Bowie’s Schöneberg residence. Unfortunately, the Turkish district of West Berlin was actually spelt Neukölln – Bowie had left out an L.

During Alice Cooper’s fallow period before his 1989 album Trash returned him to public favour, the poor old devil was reduced to appearing in a European horror movie titled Monster Dog. Despite being promised his turn as rocker Vincent Raven would only be released in Spain, the film made it out into the wider world, but Cooper’s soundtrack addition "Identity Crisises" is a little harder to track down. Overlooking the fact the plural of ‘crisis’ is ‘crises’, the song is a good one: there’s an Iggy Pop vibe to Cooper’s vocal and the video finds Alice playing the parts of James Bond, Jack The Ripper, Sherlock Holmes and Billy The Kid. Since appearing on the 1999 Rhino Records box set The Life And Crimes Of Alice Cooper, "Identity Crisises" has proved to be a hard one to officially get your paws on – it is currently missing from digital streaming services.

Listen to Alice Cooper on Spotify: