Bryan Adams has just announced he is coming back to Australia, performing his first-ever Bribie Island and Gold Coast shows plus two a day on the green winery shows in Victoria.

Adams’ tour will begin with a show at Bribie Island’s Sandstone Point Hotel on Tuesday 9 January before playing Gold Coast’s Convention Centre on Wednesday 10 January. While in Australia, Adams will also perform a pair of a day on the green winery shows in Victoria at Mt Duneed Estate, Geelong on Friday 12 January and Mitchelton Wines, Nagambie on Saturday 13 January. 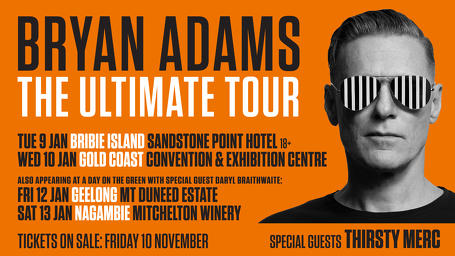 Known the world over for his signature brand of feel-good rock and roll and big ballads, Adams is an icon of epic proportions, with his music achieving #1 status in over 40 countries.

Adams will be touring in celebration of his brand-new best of album Ultimate out 3 November. Alongside classic anthems like ‘(Everything I Do) I Do It For You’, ‘Please Forgive Me’ and ‘Summer Of ‘69’, the 21-track album features two brand new songs ‘Ultimate Love’ and ‘Please Stay’ which are Adams’ first new songs in more than two years.

A sight to be seen on the live stage, Bryan Adams has been touring the world for nearly four decades. Aside from being on the road doing over 100 concerts a year, he is currently working on writing the songs for the upcoming Pretty Woman musical.

He was also awarded the Order of Canada and the Order of British Columbia - given to him for his contributions to popular music and philanthropic work via his own foundation, The Bryan Adams Foundation, it’s solid evidence that his impact on pop culture goes way beyond just music.

Joining Adams as special guests will be Australia’s own Thirsty Merc. The rockers are currently celebrating 15 years as a band, loved by fans across the country thanks to tracks like ‘Someday, Someday’, ‘In The Summertime’ and ‘20 Good Reasons’.