John Bonham, John Paul Jones, Jimmy Page and Robert Plant released Led Zeppelin III fifty years ago in the U.S., on October 5, 1970, with the U.K. and other countries following a few weeks later.

Following the whirlwind success of the first two Led Zeppelin albums and near constant touring, guitarist Jimmy Page and vocalist Robert Plant took to the now famous Bron-Yr-Aur cottage in Wales in 1970 to start the early composition of the album. They later convened with drummer John Bonham and bassist John Paul Jones for rehearsals before entering London’s Olympic Studios to begin recording in May of that year.

Their third album in less than two years and a commercial success, it topped the charts in the U.S., U.K., Canada, Australia, Italy, Holland, Denmark and more, selling more than 13 million copies worldwide. Led Zeppelin III also represented a turning point musically for the band by expanding its hard-hitting sound to include a wider range of styles, evident on acoustic-based songs like “That’s The Way” and “Bron-Y-Aur-Stomp.” Of course, it also includes one of Led Zep's most beloved and iconic rock tracks, “Immigrant Song."

“Immigrant Song” and its lyrical references to Norse mythology were inspired by the band’s concert in Reykjavik, Iceland on June 22, 1970. Six days later, the song made its live debut in England at the Bath Festival of Blues and Progressive Music. That fall, it would appear as the lead-off track on Led Zeppelin III. It has also had an enduring impact on pop culture thanks to several memorable appearances in blockbuster motion pictures such as School Of Rock and, most recently, in Marvel’s Thor: Ragnarok.

Beyond the music, the album is noteworthy for its innovative artwork. When it was originally released on vinyl, Led Zeppelin III came packaged in a gatefold sleeve designed by multi-media artist Zacron (aka Richard Drew), whom Page had met in the early 1960s when they were attending Kingston College of Art. For his design, Zacron created a surreal collection of images (planes, birds and butterflies) surrounding several cutout holes. Behind the cover, he placed a rotating disc (volvelle or wheel chart) that featured more images, including photos of all four band members. When the disc was turned by hand, different images would appear in the openings to create an interactive visual experience.

In celebration of Led Zeppelin III’s 50th anniversary, the band will reissue the Japanese version of the album’s only single – “Immigrant Song” b/w the non-album track “Hey, Hey, What Can I Do” – on 7” vinyl. Limited to 19,700 copies, it comes in a sleeve that replicates the original artwork. The single will be released on January 15, 2021 and will be made available for pre-order starting Thursday, October 8th. 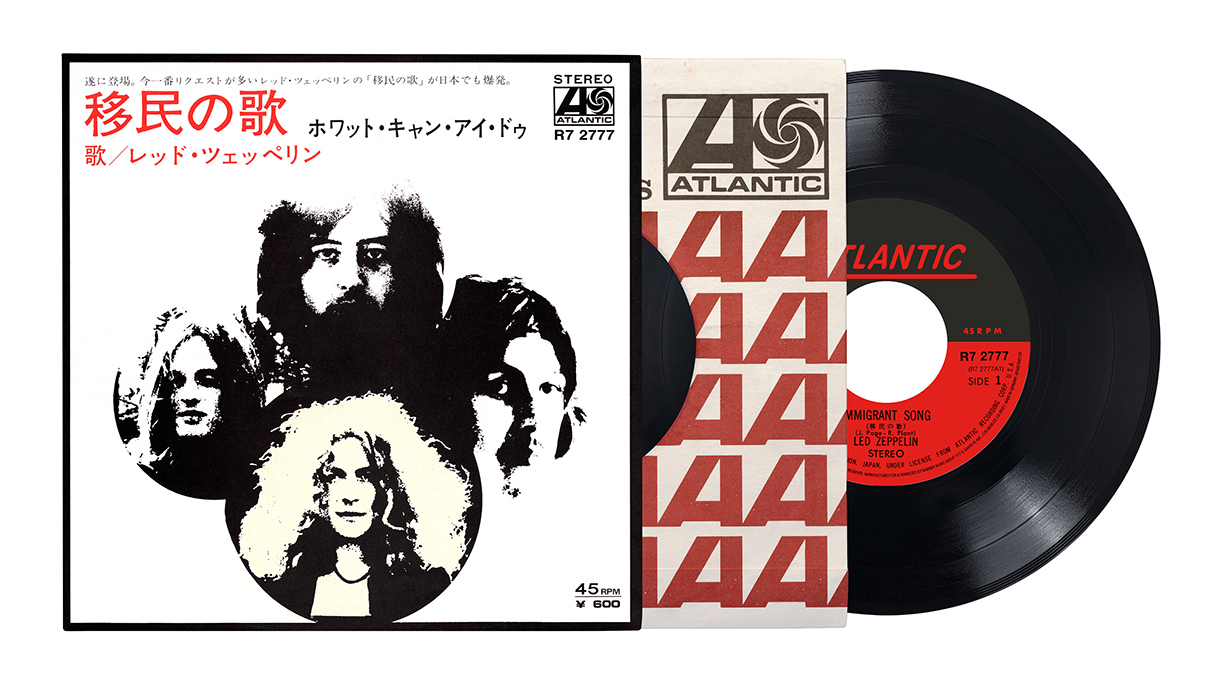