Long-time David Bowie collaborator Reeves Gabrels admits to a “heartbreaking moment” while working on the new box set, Loving The Alien (1983-1988). Hand-picked by Bowie to rework 1987’s Never Let Me Down album to a fresh blueprint outlined by the music icon prior to his 2016 death, an early take at New York’s Electric Lady Studios sessions found guitarist Gabrels overwhelmed by a sense of loss. With producer Mario McNulty at the mixing desk, Gabrels entered Studio A with his guitar, put on his headphones and closed his eyes…

“I wanted to treat it like these were fresh demos, so I came in and just listened to David’s vocals, bass and his acoustic guitar,” Gabrels says. “David and I would often record acoustic guitars simultaneously in the studio. We’d face each other with a mic in front of his guitar and a mic in front of my guitar. He’d cross one of his legs, his left foot would bounce, he’d move his shoulder in a certain way and he’d kind of look past you. He tended to accent the one and three of each bar and I’d sit on the backbeat, so we had a nice push/pull feel.

“I had my eyes closed and I can see all this – I can see me playing with him. I’ve got my guitar in my right ear, David’s guitar in my left ear and his vocals in the centre. I got lost in it in as much as I was playing with him – he was there. When I opened my eyes he wasn’t there, and that was... I had to take a few seconds to gather myself at the end of that – it was when I really felt the loss.” 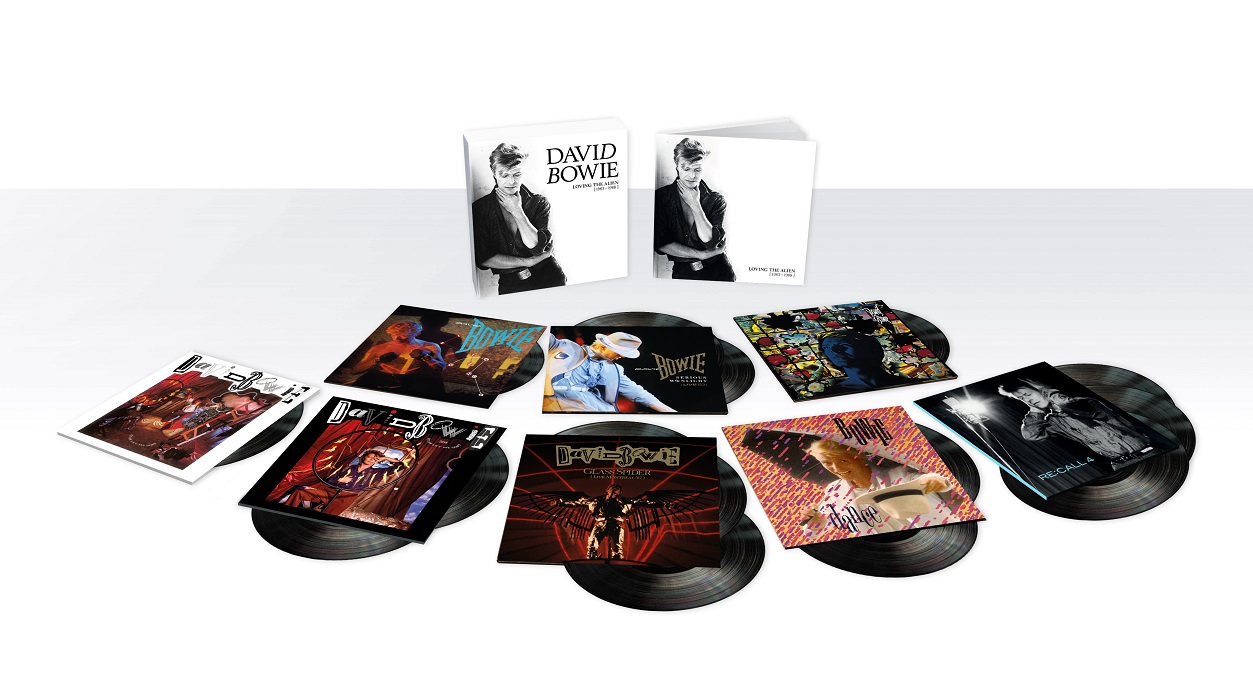 Bowie is gone, but the expansive Loving The Alien (1983-1988) collection, available in lavish 15LP and 11CD set formats, provides an opportunity to return to the decade which spawned hits such as “Let’s Dance”, “Modern Love” and “Absolute Beginners”. While the era delivered Bowie the biggest commercial success of his career, the musician expressed disdain for a number of the recordings he made over the decade. Gabrels, who met Bowie during 1987’s Glass Spider tour, provided an impetus for Bowie to escape his slick ‘80s malaise via their Tin Machine collaboration. While there’s no Tin Machine music on the Loving The Alien set (“I think Tin Machine warrants a box set of its own,” Gabrels suggests. “It sort of falls outside the Bowie catalogue.”), Gabrels’ work on Never Let Me Down 2018 returns him to the period he ostensibly rescued Bowie from.

“Well, it is a funny sequence of events,” Gabrels laughs. “David always maintained there were good songs on Never Let Me Down but that he wasn’t happy with the production and he blamed himself for not being more involved in it – at some point he said he’d checked out from the process and wasn’t participating as much as he normally would have. David and I had talked many times about re-recording some songs, but I thought it was better to just write new songs than look to the past. It came up so frequently over the space of 15 years I kind of knew what he was looking to do, but he also knew I was reticent to do it. With his passing he left behind plans for what he wanted to happen with the re-releases and it’s kind of like his last laugh in some respects – he’s playing another trick on me!”

As a posthumous musical matchmaker, Bowie entrusted the rework of Never Let Me Down to his collaborators from various eras: Gabrels (1988-1999), drummer Sterling Campbell (1991-2004), guitarist David Torn (2002-2013) and bassist Tim Lefebvre (2015). A stunning revision of an unloved release, Never Let Me Down 2018 isn’t the first time Bowie entrusted Gabrels with a privileged, confidante role.

“We knew each other so well I even had his bank card and his passcode! Since I lived near a cash machine, on my way to the studio he’d call me up. ‘Can you get me a couple of hundred bucks?’ It was safer for me to go, since I don’t look like David Bowie!”

While Gabrels won’t reveal firm plans for the next David Bowie box set in 2019, he hopes the outtakes of 1995’s Outside album might finally be given an official release. Despite Bowie’s initial talk of sequels to Outside’s dystopian drama, the bulk of the prolific sessions (which saw Bowie and Gabrels recording many hours of Gothic, abstract sonic backdrops alongside Brian Eno) have never been officially released.

“There are enough bootleg versions out there that I think it’s really time to do it right,” the musician admits. “I can’t say absolutely, but I am hoping we would get to that. I would draw a direct line from Outside to [Bowie’s 2016 album] Blackstar – the approach was very similar to what we were doing on Outside, except for the fact the technology was so much better on Blackstar. On Outside we had to cut tape to make edits, which made it a lot more… dangerous!”

Gabrels kept in sporadic contact with Bowie in the years following 1999’s hours…, his final album with his mentor before striking out to work on soundtracks and solo projects, but by the time of Bowie’s 2016 passing Gabrels had become a full-time member of The Cure. It was actually Bowie who introduced Gabrels to his future employer, The Cure’s Robert Smith, at Bowie’s 50th birthday party event at Madison Square Garden in 1997. Hitting it off with Smith, Gabrels guested on The Cure’s psychedelic single “Wrong Number” just a few months later.

“That song was actually one of the few times I pissed David off,” Gabrels says. “I kept telling him that I was going to be on this track with The Cure, then it came out around the same time as [David Bowie’s Earthling single] “I’m Afraid Of Americans”. The Cure charted higher in America than David’s song, so he was all [moody voice] ‘Why didn’t you tell me?’ and I was like, ‘I told you, but you weren’t interested!’ It was actually great for me, since every clothing store and shop I went into in the US that fall in 1997 was either playing The Cure or Bowie, so it wasn’t bad for me. I still get a thrill hearing these songs on the radio – or whatever substitutes for radio now.”