Gorillaz have announced a new comic book, Almanac, commemorating the band’s vibrant 20-year visual history, will be released later this year. The characters masterminded by singer Damon Albarn and artist Jamie Hewlett – 2-D, Murdoc Niccals, Noodle and Russel Hobbs – will feature in the 120-page hardcover book, embellished with two decades worth of Hewlett’s original artwork, including “puzzles, games and a raft of special guest appearances from Gorillaz collaborators past and present.”

Inspired by the great British tradition of the hardback annual, the Gorillaz’ Almanac will arrive on October 16th, published in partnership with the renowned Z2 Comics. The first-ever comic strip to feature 2D and the gang promises to be a “one of a kind, fun-packed … compendium of delights” celebrating two glorious decades of Gorillaz.

“Every fan of comics and animation has dreamed of seeing the Gorillaz make their comic book debut, with the Z2 team chief among them,” Z2 publisher Josh Frankel shared in a statement. “The artwork, the music, and the mythos all add up to what is destined to be one of our most buzzed about releases in history, and when fans see just what we have planned, I know everyone will agree it was well worth the wait.”

“An almanac is an annual book that is a treasure house of useful information like weather forecasts, trivia and puzzles and games,” Z2 Comics’ Sridhar Reddy told Rolling Stone. “They used to sell almanacs at school book fairs, but I’m pretty sure the internet killed the concept of collecting information into a single published volume. It’s what I love about doing a Gorillaz almanac, in that it brings together so much of the ephemera of the band into a physical book that you can kick back with, take a fun deep dive and listen to great music while you’re doing it. It’s consistent with the band’s ethos of immersion.”

Gorillaz Almanac will arrive on October 16th and will be available in standard, deluxe and super deluxe editions. The standard edition includes a CD of music from Season One of Song Machine and a hardcover copy of the comic book; the oversized deluxe edition comes in a slipcase with bonus court art prints and stickers signed by the band; the super deluxe edition (currently sold out) arrives with a special artwork signed by Jamie Hewlett. Check out all the options available now to Pre-order HERE. 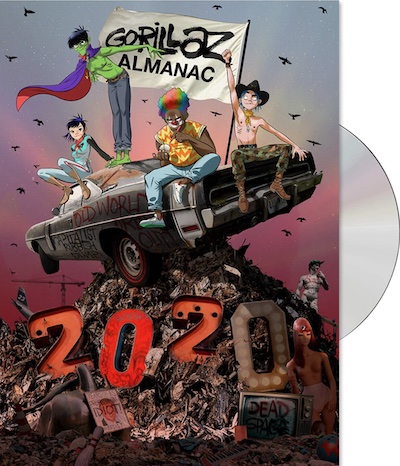 Listen to Gorillaz on Spotify:

Listen to Gorillaz on Apple Music: