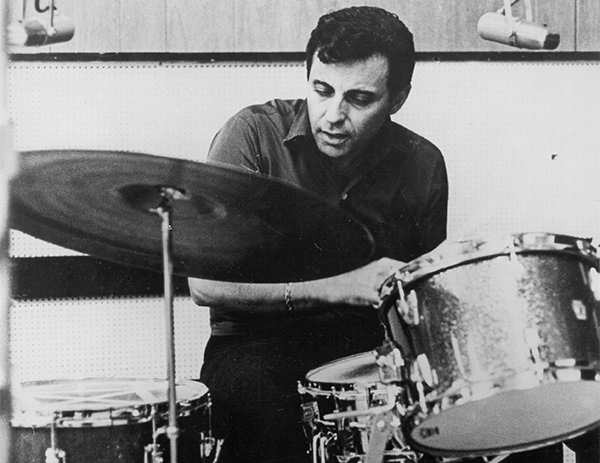 Hal Blaine, a drummer for the famed group of session musicians known as the Wrecking Crew, has died, Aged 90. Blaine’s family confirmed the news via social media.

As a member of the Wrecking Crew – Phil Spector’s go-to session band - Blaine’s résumé banked up tens of thousands of hits. Working with everyone from Simon & Garfunkel to Sam Cooke, Blaine is thought to be one of the most recorded studio drummers in the history of the music industry.

In memory of Blaine, here are five moments of brilliance from behind the kit in his Sixties and Seventies heyday.

The opening drum track of this song is one of Motown’s most iconic an instantly recognizable. But, keep listening to hear how Blaine masterfully guides the emotion of the lyric with the dynamics of his playing. The tentative and hesitant verses explode in rolling fills to match the passion in Ronnie Spector’s voice.

This Carpenter’s version of Burt Bacharach’s “Close To You” was recorded with Blaine’s Wrecking Crew studio band. The high-hat flare is a Blaine signature imported from his jazz origins.

Right from the outset, Blaine’s shaker and congo pairing turns this acoustic testimonial to heroes into a euphoric celebration.

5. The 5th Dimension “Aquarius/Let The Sunshine In

This soul pop-vocal quintet may have been channelling their vision from another dimension, but Blaine confidently propels the track, guiding us through the epic journey with the surety of a steam train.

These are just a handful of the thousands of songs Hal Blaine lent his intuitive and stylish talents to. Somehow, he also found time to release a string of instrumental solo albums in the 1960s. In the year 2000 Blaine was inducted into the Rock and Roll Hall of Fame and last year received a Lifetime Achievement Grammy.

Blaine is survived by his daughter Michelle, and seven grandchildren, who issued a statement saying,

Last month, he performed at his own 90th birthday party. What a legend.