So, we all know about Elton John’s love of Daddy Cool yeah? How he was inspired to write “Crocodile Rock” after becoming obsessed with “Eagle Rock”?

What’s not quite so well-known is the love that Tom Petty and his band of Heartbreakers also had and have for the great Australian band.  This seemed to be more or less a secret between themselves until around the 2009 release of the Tom Petty & The Heartbreakers live box set The Live Anthology, when keyboardist and Heartbreakers mainstay Benmont Tench did some interviews.

“… we all loved this band named Daddy Cool, an Australian group that was just fantastic and obscure as you can get, “ Tench told Jambase.com. “One of the first times I went to Tom’s house he said, ‘Check this out,’ and put on this Daddy Cool record. It was something I’d heard a couple weeks before on the college radio station and was blown away but didn’t know who it was. And I’m sitting there with Tom and thinking ‘Okay, this is good. This will work.'”

And Tom started displaying his love for Daddy Cool when he started his Sirius radio show, Tom Petty’s Buried Treasure, playing both “Eagle Rock” and “Come Back Again” on a semi-regular basis in amongst his other favourite stuff – classic stuff – from the ‘50s, 60s and 70s.

It’s a shame for us Australian music fans that Tom and the band never got around to performing one of these DC tunes live, but Benmont has been known to play a slinky cover of “Come Back Again” at his solo shows – check out this cool version from 2014, filmed live at New York station WFUV.

Benmont also dug deeper into his love of the band an interview with Australian music blogger Jeremy Dylan.

“When I was 17 or 18 and I’d just started hanging out with Tom and Mike and they had that band Mudcrutch that we have again.. I was driving around one night and at 2 am the local station put on this song that I’d never heard before…. And I was like ‘that’s great’ but they didn’t say who it was.. a few days later I go over to Tom’s house, early days of hanging out and he’s got like a stereo that plays through PA speakers and he says check this out.. and puts on “Come Back Again”… That first Daddy Cool record is a damn good record..  that’s a record that is a lesson in how to play. Two guitars, bass and drums, a little bit of piano, a little bit of pedal steel, really good songwriting… that was a terrific rock’n’roll band.. that first Daddy Cool record, there’s some grooves on that sucker…

And then there’s this, from Benmont on Twitter from a couple of years back: 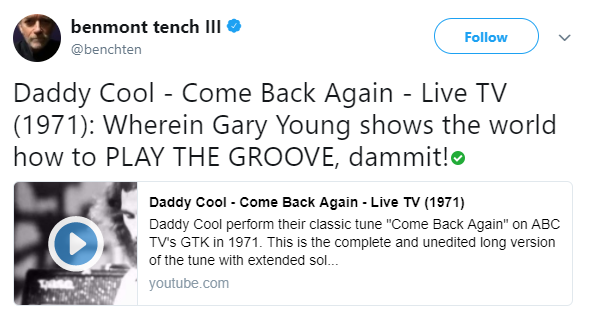 With Tom Petty no longer with us, and Daddy Cool’s Ross Hannaford and Wayne Duncan also gone, ILYOS wonders if it’s too late to dream that Ross Wilson and Garry Young to team up with Benmont and maybe the rest of the Heartbreakers to record or at least play. How cool would that be?