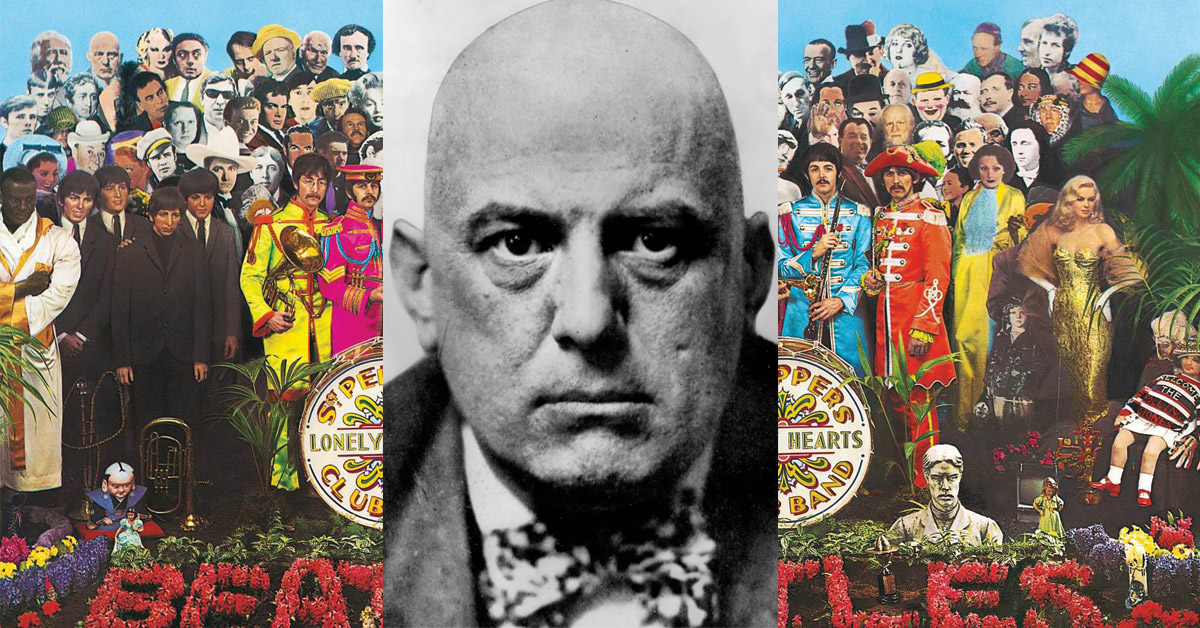 Today marks the date of death of Aleister Crowley, a British occultist who has cast a strange shadow over rock music for more than 50 years. Artists including David Bowie, The Beatles and Led Zeppelin have shown an interest in Crowley, despite the self-proclaimed ‘Great Beast’ dying many years before the emergence of these iconic artists. Practicing an amalgam of pseudo-religious rituals and acting on sexual mores which outraged the buttoned-down England of the early 20th century, the infamous author died a sickly, bankrupt drug addict on December 1, 1947.

Despite his pitiful death, this anarchist – who, in 1913’s Magick (Book 4), advocated for adding backmasked messages to records as a subliminal means of spreading his message – became a beacon for some of the biggest music stars of the 60s, 70s and beyond. Here are just some of the times Aleister Crowley influenced rock’n’roll…

Sgt Pepper’s Lonely Hearts Club Band, one of the most famous album covers of all time, features the scowling Aleister Crowley in the top left row sitting snugly between an Indian guru and Mae West. Crowley wasn’t the only questionable appearance on the Peter Blake-designed cover, with Adolf Hitler also nominated for inclusion before being removed during the shoot due to the possible offense his image would cause. The inclusion of Crowley on the 1967 album sleeve captured a rising interest in Crowley during the 60s – as a free-love and drugs advocate, many in the hippie movement saw his teachings of “sex magick” as visionary. John Lennon has been ear-marked as the Beatle who put forward Crowley for the cover slot.

Speaking of “sex magick”, it’s hard to hide the Aleister Crowley influence in the title of the classic 1991 Red Hot Chili Peppers album Blood Sugar Sex Magik. Crowley first wrote about “sex magick” in his 1914 book Liber Ape, which found him adjusting the teachings of the occult order Ordo Templi Orientis to fit with his own philosophies. While it’s unknown if the Chili Peppers ever dabbled in Crowley’s “sex magick” rituals to transcend reality and invoke new planes of creativity, RHCP John Frusciante took his interest in Crowley deeper than his colleagues. A voracious reader of Crowley biographies and self-penned works, the guitarist’s 2004 Inside Of Emptiness album featured a number of songs inspired by Crowley texts. Frusciante stated on his website that the tracks “Emptiness”, “I’m Around” and “666” all drew their lyrics from the English occultist.

While Crowley’s influence on Led Zeppelin’s musical output goes little beyond a Led Zeppelin III LP run-out groove inscribed with the message “Do what thou wilt” (a Crowley citation), Led Zep guitarist Jimmy Page arguably remains rock’s biggest acolyte of ‘The Great Beast’. In the 1970s, the aptly-named Page invested a large amount of money in an occult bookshop (christened Equinox, after Crowley’s book series of the same name) and then took his fandom to a whole new level by purchasing Crowley’s former home Boleskine House on the banks of Scotland’s Loch Ness. Conspiracy theorists have suggested the ills which befell Led Zeppelin in the mid-70s after their imperial phase were due to Jimmy Page’s keen interest in the occult, but Page has long dismissed the media’s fascination with his Crowley phase.  “It’s unfortunate that my studies of mysticism and Eastern and Western traditions of magic and Tantricism have all come under the umbrella of Crowley…” Page told Guitar World magazine in 2003. “It wasn’t unusual [in the sixties] to be interested in comparative religions and magic.”

As well as a photoshoot from the Hunky Dory era where David Bowie models a look similar to the Golden Dawn garb which Crowley donned at the turn of the century, the 1971 song “Quicksand” kicks off with the line “I’m closer to the Golden Dawn, immersed in Crowley’s uniform of imagery”. “My overriding interest was in Kabbalah and Crowleyism,” Bowie suggested in 1976, not long after the cocaine-fatigued star had expressed a fear the Devil lived in his LA swimming pool. “That whole dark and rather fearsome never-world of the wrong side of the brain.”

While Iron Maiden frontman Bruce Dickinson had previously dabbled in songs which investigated Aleister Crowley’s legacy (see “Revelations”, from Iron Maiden’s 1981 album Piece Of Mind), it wasn’t until his 2008 film Chemical Wedding he was able to further delve into the Crowley realm. Initially conceived by Dickinson in the 1990s but not making it to film until a decade later, Chemical Wedding starred Simon Callow (Four Weddings And A Funeral, Shakespeare In Love) as a Cambridge professor manifested by Crowley’s malevolent spirit. A soundtrack to the film (not related to Dickinson’s 1998 solo album The Chemical Wedding) was also released, featuring the Iron Maiden track "Can I Play With Madness" and solo Dickinson material. Dickinson’s great 2017 autobiography What Does This Button Do? details further information on his interest in Crowley’s maverick tale.

Incorporating funereal keyboards and gargantuan Randy Rhoads licks, Ozzy Osbourne’s “Mr Crowley”, lifted from 1980’s infamous Blizzard Of Oz debut solo album, finds Ozzy directly addressing the magick-maker of the song title. While a 1980 issue of Circus magazine found Osbourne suggesting Crowley was “a phenomenon of his time”, the song takes a less empathetic tack towards the myth of Crowley: “Did you talk to the dead? Your lifestyle to me seems so tragic”. In the liner notes of his compilation The Ozzman Cometh, Osbourne provided further detail on the writing of the song. “He was a very weird guy and I always wanted to write a song about him. While we were recording the Blizzard of Ozz album there was a pack of tarot cards he had designed lying around the studio. Well, one thing lead to another and “Mr Crowley” was born.”

Despite once proclaiming “I want blasphemy, murder, rape, revolution”, Aleister Crowley has inspired a number of the finest musicians to pen music in his honour. On their 1998 reunion album The Last Wave Of Summer, even Cold Chisel’s track “Bal-A-Versailles” opens with the line “Aleister Crowley and Bar Shem Tov are lyin’ in the alley, too stoned to move” (although the Don Walker tracks finds Barnesy pronouncing the Beast’s given name as “Alley-ester”). Others rumoured to be influenced include The Doors (a stone sculpture surrounded by the band on the reverse side of the 13 LP is alleged to be Crowley), Stevie Nicks (Crowley’s The Confessions Of A Drug Fiend was supposedly one of her favourite books) and The Rolling Stones (at one point, Mick Jagger was tempted by director Kenneth Anger to star as Lucifer in the Crowley-influenced film Lucifer Rising, released after a long gestation in 1980). Dead for more than 70 years but still throwing a spanner in the works – it’s just the way Crowley would have liked it.