It’s widely agreed that Nirvana ignited a grunge revolution when their 1991 album, Nevermind took over the commercial airwaves with one of the biggest lead singles of all-time, “Smells Like Teen Spirit.” However, even though it may have seemed like pop-culture had just been thrown short, fast curveball of unsolicited angst, the band had more than given fair warning when they released their first album, Bleach two years earlier on June 15, 1989.

The year before, Nirvana's first-ever single, a hook-driven cover of “Love Buzz” by a Dutch band called Shocking Blue, was released on Seattle indie label, Sub Pop – who would, in turn, come to achieve cult status for their part in bringing grunge to the masses. Impressed with the debut single, they asked for a follow-up EP; but, powered by the boldness of youth, the band decided they were ready for an LP and instead delivered the blistering 13-track Bleach.

While Bleach may not be home to Nirvana’s more iconic songs – like “Come As You Are”, “In Bloom” and of course, “Smells Like Teen Spirit” – for a debut album, recorded on a shoestring budget of $600 and some change, it proves Kurt Cobain almost incapable of suppressing his pop sensibility. It’s discordant, menacing and lyrically bleak – but it’s also catchy as hell, polished in the right places, and alluringly unhinged in most others. Early jangler, “About A Girl” is a perfect example of Cobain’s ability to make a classic pop song sound effortless, then drown it in the perfect measure of emotion to make sure it cuts straight to the heart.

In 1993, Kurt Cobain told Spin magazine that he “didn't give a flying f*ck what the lyrics were about” in regard to Bleach because he was “pissed off” when writing them the night before recording started. “Let’s just scream negative lyrics, and as long as they're not sexist and don't get too embarrassing it'll be okay,” he elaborated. “I don't hold any of those lyrics dear to me.” And, while tracks like “Negative Creep” appear tailor-made to prove that statement true, is there anyone out there that can really deny singing along to this apparently random rant without feeling like you just stepped out of a confessional booth absolved of all wrongdoing? He may say it was accidental, but Cobain’s ability to pinpoint universal themes was nothing short of explosive.

Bleach isn’t just a great debut album. Its 42 minutes of raw and kinetic energy is a searing precursor to the profound disrupter that followed it – a sonic storm of pure emotion and undeniable hooks from a band destined to permanently transform the world around them in a career that lasted just six years.

To celebrate this iconic debut, Sub Pop is releasing an Australian indie exclusive, limited-edition coloured vinyl reissue of Bleach which is due out on July 31st.

“Continuing the legacy of reminding people Nirvana had a record before Nevermind, Sub Pop Records presents an Australian limited edition exclusive black and white, single-LP version of Bleach, Nirvana’s debut album,” they said in a statement. 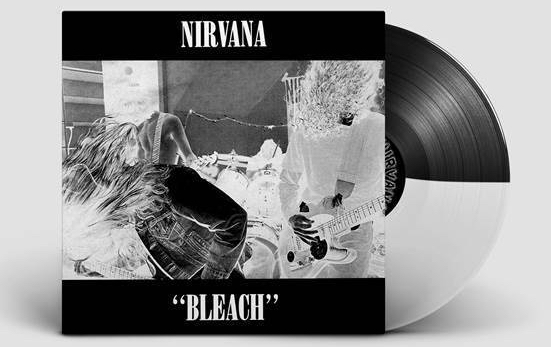 This super cool, two-tone pressing is a must-have for any vinyl collector. Don’t miss out – pre-order here!

Listen to Bleach on Spotify:

Listen to Bleach on Apple Music: