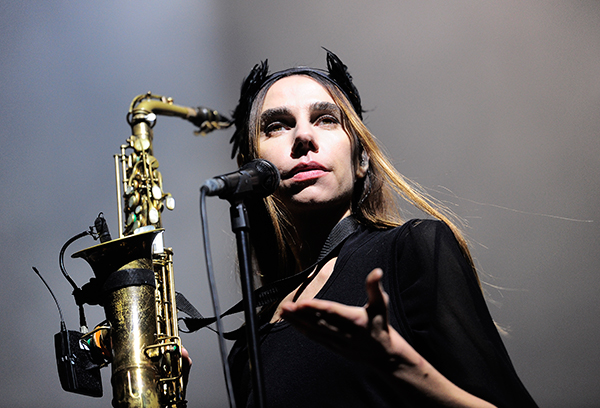 PJ Harvey is the subject of a new documentary, A Dog Called Money, set to premiere at the Berlin International Film Festival in February 2019.

Directed by Irish photographer and filmmaker Seamus Murphy…a regular collaborator with Harvey… the film chronicles the recording of her 2016 album, The Hope Six Demolition Project, in London, along with footage of the pair’s travels to Kosovo, Afghanistan, and Washington D.C.

“Polly and I know and trust each other,” states Murphy. “Enough for her to travel with me to Afghanistan and other challenging places, and for me to believe she’d bring back magic. She then invited me into a big white box behind one-way windows to film every moment of the recording of the songs she brought back. Individually and together, this is our response to what we encountered.”

Harvey and Murphy have previously collaborated on a trio of music videos for Hope Six Demolition Project tracks, “The Orange Monkey,” “The Wheel” and “The Community of Hope.”

Earlier this year, the British songstress also announced that she will be scoring the stage adaptation of the classic 1950 film, All About Eve, starring Gillian Anderson, set to kick off a three-month run in London next February.

For a well-timed trip down memory lane, check out our I Like: The 90s playlist, featuring PJ Harvey along with many of the coolest tunes the 90s has on offer!