Alberts publishing has released a statement on their website, saying Young "created a new sound for the Australian music industry."

Young, with his songwriting partner Harry Vanda, co-wrote "Friday On My Mind" - the monster hit that charted around the world. Vanda and Young went on to become an unstoppable creative force who wrote or produced songs for The Easybeats, AC/DC and John Paul Young.

"A consummate songwriter, trailblazing producer, artist, mentor and extraordinary musician, George was above all else a gentleman who was unfailingly modest, charming, intelligent and loyal, a man with a wonderful sense of humour"  said Alberts CEO David Albert

AC/DC,  the band fronted by his brothers Angus and Malcolm, said that without Young's help and guidance "there would not have been an AC/DC". 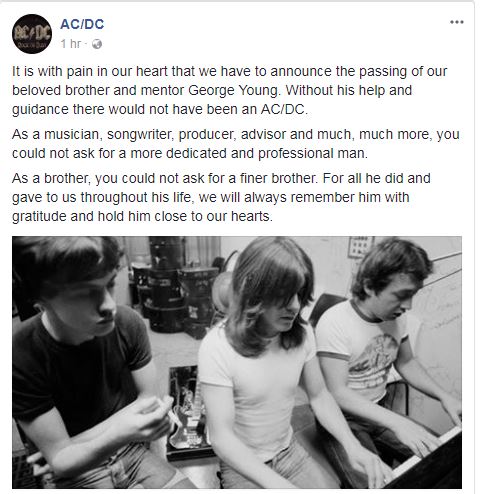 RIP George Young and thank you for your immense contribution to Australian music.