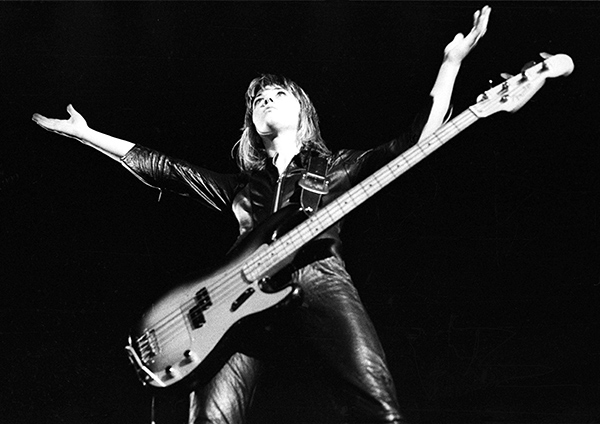 There's a reason why you don't see many bass playing lead singers in bands and it's not because bass players can't sing, it's because playing bass and singing lead vocals is hard! But not for pint-sized power-house, Suzi Quatro. She manages to make it look like an afterthought to her high energy performances, despite the fact that the instrument practically dwarfs her.

Let's revisit some classic Suzi Q moments to check out just how hard she's actually working under that pro-showman's veneer of ease.

Bursting from the centre of a giant red Q, declaring, "all my life I wanted to be someone and here I am!" - pay close attention to the riff she's slaying under the build up! Throughout the verses, she effortlessly lays down the syncopated rhythm that's at odds with her vocal, and when it comes to the mid-song jam, it's not so much that she holds her own, as it seems she challenges the others to keep up.

So many amazing things happen in this clip before the song even starts! A leather-clad Suzi Q screams, "do you wanna go down to devil gate drive?" to her band of eager rebels, who for some reason have their jazz hands on, then they all jump up for a quick flash dance before launching into the song.

Suzi plays a white Fender P-Bass, the heaviest of all the basses, slung low enough to be in Metallica, while keeping up with the high energy, side-stepping choreography. She might make it look easy, but she's gotta be working like a boss.

The double-time bassline has Suzi's fingers running relentlessly from the get-go while she nails the screaming vocal at the top of her range. Despite her head-to-toe leather jumpsuit, she doesn't even break a sweat. How good are wind machines!

There's no question of the impact Suzi Quatro has had on rock and roll, fashion, women and so much more, but hats off to her for also setting the bar impossibly high as a consummate pro-musician while she was doing it.

For more great riffs and classic rock and roll, check out our I Like: Suzi Quatro playlist, featuring all the hits from the original wild one.