The Monkees' Michael Nesmith and Micky Dolenz Will Tour Australia

The Monkees' Michael Nesmith and Micky Dolenz Will Tour Australia

The Monkees' Michael Nesmith and Micky Dolenz will tour Australia and New Zealand in June 2019, performing all their hits with The Monkees spanning more than 50 years. As well as all of those marvelous Mike and Micky hit singles, this will be the first time Mike has appeared in Australia or New Zealand since the release of his 1977 “Live At The Palais”.

Expect to hear songs such as “Last Train to Clarksville”, “Listen To The Band”, “Mary Mary”, “Different Drum”, “(I’m Not Your) Steppin’ Stone”, “The Girl I Knew Somewhere”, “I’m A Believer”, “Good Clean Fun”, “D.W. Washburn”, “Circle Sky”, “Randy Scouse Git”, “Papa Gene’s Blues, “Take a Giant Step”, “What Am I Doing Hangin’ Round”… and that’s less than half of what you’ll get to sing along to on the night!

"I love being on stage with Micky,” says Nesmith. “We’ve been collaborating for over 50 years, so it’s hard to believe it’s never been just the two of us. I’m excited to dust off some tunes that I haven’t played for a long time too. These are going to be some fun shows.”

"Right from the get-go, I admired Mike's songs. When we used to get together around the campfire to sing in the early days, we were always doing his songs,” says Dolenz. “We always had such a great a vocal blend; he was the one who encouraged me to write songs of my own. I've always been a big fan and now we finally get to do the Mike & Micky show that we riffed on back when we were shooting The Monkees."

The Monkees Present: The Mike & Micky Show is a unique concert experience. Times may change but infectious pop hits and wonderfully charismatic characters stay in our hearts and memories forever. 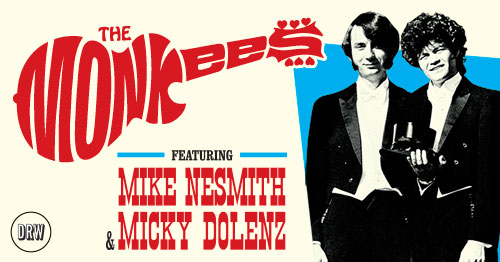 All tickets and info can be found here and listen to songs from ther classic catlogue on Spotify to get you in the mood...

The album features all new material sung by the surviving Monkees Micky Dolenz, Michael Nesmith and Peter Tork, and the unmistakable voice of the late Davey Jones is present on two tracks. The album was again produced by Fountains Of Wayne’s Adam Schlesinger. In addition to Christmas classics like “Merry Christmas, Baby” and “Silver Bells”, it includes covers of Paul McCartney & Wings’ 1979 tune "Wonderful Christmastime" and Wizzard’s much-loved ’73 smash “I Wish It Could Be Christmas Every Day”. Students of power pop will be thrilled to hear the Monkees cover Big Star’s “Jesus Christ”, with guests Peter Buck of R.E.M and The Minus 5, and Scott McCaughey of The Minus 5. Buck & McCaughey also contributed a new song, as have Rivers Cuomo of Weezer and Andy Partridge of XTC, both of whom contributed so wonderfully to Good Times!