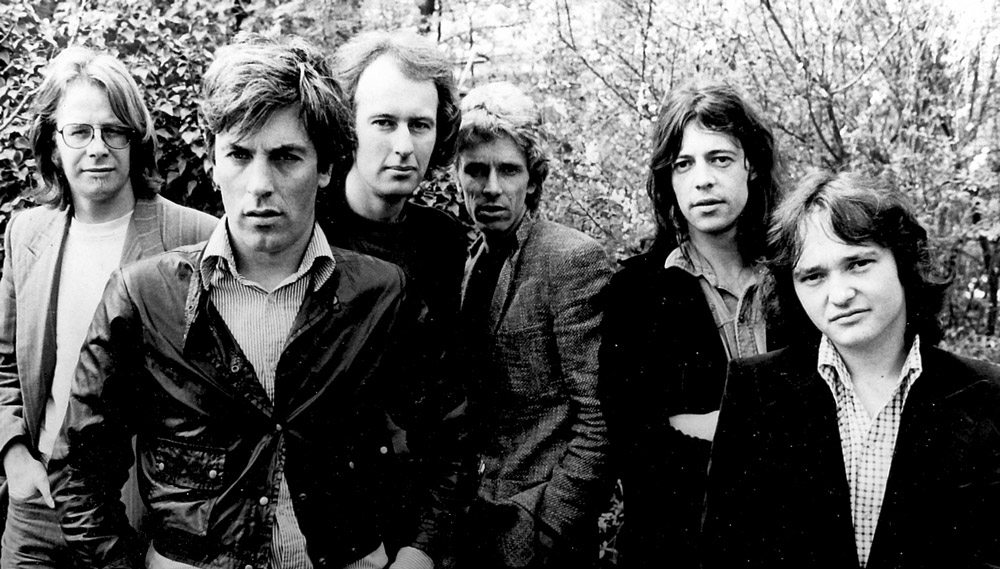 40 years ago, on the back of their just-released second album Don’t Throw Stones, Melbourne’s great new wave pub rock band The Sports, were in the UK touring with Graham Parker & The Rumour and recording an album for Stiff Records; one that never came out. We take a look at this forgotten moment, when one of Australia’s greatest bands nearly caught the new wave to international acclaim.

The Sports were a fine and fascinating band. Fronted of course by the enigmatic Stephen – then jut Steve - Cummings, the band appeared on the Daddy Cool-inspired Melbourne roots rock scene in 1976, out of the ashes of the enigmatic Pelaco Brothers, a band which had also featured Joe Camilleri of Jo Jo Zep & the Falcons. The Pelaco Brothers had strong links to the Carlton underground theatre and music scene; The Sports maintained something of that counter-cultural and artistic sensibility and added an energetic rock’n’roll vibe, inspired undoubtedly by the back to basics pub rock scene in the UK that had precipitated the punk scene, which was now, in ’76, exploding in London. Dave Edmunds was a clear Sports fave.

The early Sports, featuring lanky and bearded guitarist Ed Bates, where a great band with strong R&B and rockabilly roots, and their self-released Fair Game EP and first Mushroom LP Reckless are both classics of a small genre that at least one person has called “ockerbilley.” However, by ’78 music was changing; punk had turned into new wave and ‘60s rock sensibilities were in vogue, and Cummings saw an opportunity and took it. With revered Carlton scene guitarist (and early 3RRR – then known as 3RMT – presenter) Martin Armiger taking Bates’ place, The Sports toughened up their act and started sounding more contemporary and commercial.

The band’s first record with Armiger was their first proper hit – the mighty “Who Listens To The Radio?” which came out in 1978. By the year's end, the band was touring Australia with England’s much-adored pub rock-into-new wave outfit Graham Parker & the Rumour, and recording a second album.

Stiff wanted the Sports too, so a tour with Parker was organized, and a deal between Stiff and Sports label Mushroom was put in place. Ahead of the band’s UK tour, Stiff released “Who Listens to The Radio” as a single – with a koala on the cover. The band arrived in the UK and were presented to the media at a reception/show surrounded by posters from the Australian Tourism Bureau, with plenty of free Fosters for everyone. Stiff Records, always quick with a gimmick, saw the band’s very Australianness as a novelty. Hardly a genius idea in these just-post Barry McKenzie days, especially given the shellacking both the Saints and Radio Birdman had recently received there, simply for having dared come over from the Antipodes.

Still, the tour with Parker went well. There was a personal connection between the two bands (Cummings would later write about riding the tour bus with Parker, deep in conversation) and a musical affinity; GP’s crowd was the right audience for our Aussie heroes. The band also started recording at Stiff’s behest – the label thought that Don’t Throw Stones was too slick for the local audience and put the band into the studio with Stiff house producer Liam Sternberg to rerecord most of the album along with some new tunes and versions of the handful of Reckless tracks that the band still played.

What the band put to tape was fantastic. Australian audiences got a sniff of it some months later when Mushroom released the OKUK! EP. OKUK! featured the bands dynamic and semi-hit cover of The Easybeats’ “Wedding Ring”, a fantastic new version of the Don’t Throw Stones track “Live, Work & Play”, and two great new songs, including the Armiger cracker “Radio Show” – the band’s second love song to radio, and one Armiger had first performed in the High Rise Bombers in 1978 alongside a young Paul Kelly.

Alas, that’s pretty much all anyone ever heard of these sessions, until just a few years ago. By the time The Sports came home, interest from the US meant that Mushroom was pulling out of the Stiff deal and sizing up other options. The recordings languished in the can until 2014, when Festival/Warner released a deluxe edition of Don’t Throw Stones and added the UK recordings as bonuses, amongst other recordings. Most of the recordings anyway – it seems weird that there were no new versions of key album tracks “Don’t Throw Stones” and “Suspicious Minds,” or the single “Who Listen To The Radio?” to be found – although, at this point, no one involved can remember.

The Sports ended up signing to Arista in the US, then run by supreme music biz powerbroker Clive Davis. “Who Listens To The Radio?” ended up cracking the Top 40 over there, but a major New York showcase gig turned into a disaster for the band, and Arista’s interest faded. But that’s another story; one we might trot out later in the year when that anniversary rolls around.