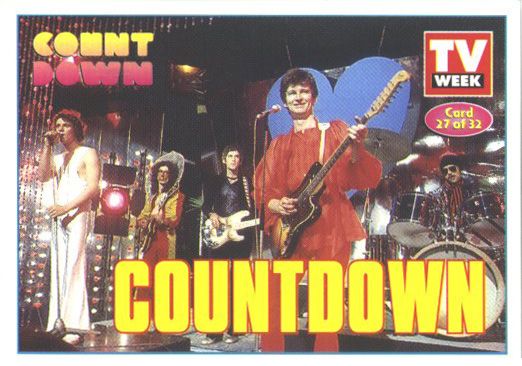 As we recently posted, ABC-TV will be screening some original episodes of Countdown, in the original Sunday 6pm timeslot. (Well, not quite original – the first few episodes ran for 25 minutes and screened, in black & white, at 6:30 on a Friday, starting November 8 1974).

To get ourselves in the mood for the upcoming Sunday nights, let’s check out some great appearances by some of the iconic Australian artists of the early Countdown era. We’ll catch up with great tracks from the ‘80s soon!

The first song played on the first colour transmission of Countdown May11975 -  a Saturday -  this is an actual “film clip” for the song, produced by Countdown, which goes to show the lengths they would go to support local talent. The famous clip for “Yesterday’s Hero” by John Paul Young – see below - was another Countdown production.

From that same May 1 1975 episode (“in colour on 86 stations"), Stevie perhaps thought colour TV deserved something special sartorially. A great look and a classic track. It may have been recorded in colour and first aired (in B&W) the previous week unless Rage have the date wrong.

Squeak was a huge Countdown favourite and, as perhaps Australia’s premier solo pop artist of the mid-70s, he no doubt helped put Countdown on the map. As with the Skyhooks clip above, this particular film clip was produced by Countdown. The record company film clip, which wasn’t screened on Countdown and probably won’t be too familiar, can be seen here.

Hush “Glad All Over”

Australia’s great glam hard rockers, with one of our great unsung rock heroes Les Gock, rocking out right of the screen. Dig those furry shoulder...things.

One of the most famous Countdown performances, for obvious reasons. And, as becomes clearly apparent around the 2:18 mark (when Bon lights up!), it’s a genuine live performance.

Split Enz “No Bother To Me”

A rarely seen performance from the early band, with Phil Judd (later of the Swingers) on a 12-string acoustic, and Tim Finn’s hair at its most outrageous.

It’s strange to look back at it now, but the ‘50s revival was a big thing in the ‘70s, and Countdown helped push these guys into the stratosphere in 1976.

How f’ing cool is Marc Hunter hey? How these guys weren’t international superstars is beyond me. (Actually, you can blame the drugs and Marc’s self-destructive attitudes I think). So many great songs.

TMG “Jump In My Car”

A rarely seen and very cool Countdown clip that’s a nice alternative to the iconic record company produced one. Such an under-rated band.

One of our great pop stars of the ‘70s was obviously a transplanted American, but she’s had a successful career that began with her arrival, at the age of 16, in 1970, to appear in Hair, and which continues to this day.

Keep an eye out for Part 2 next week, and in the mean time have a listen to our Hits of the 70s playlist on Spotify...