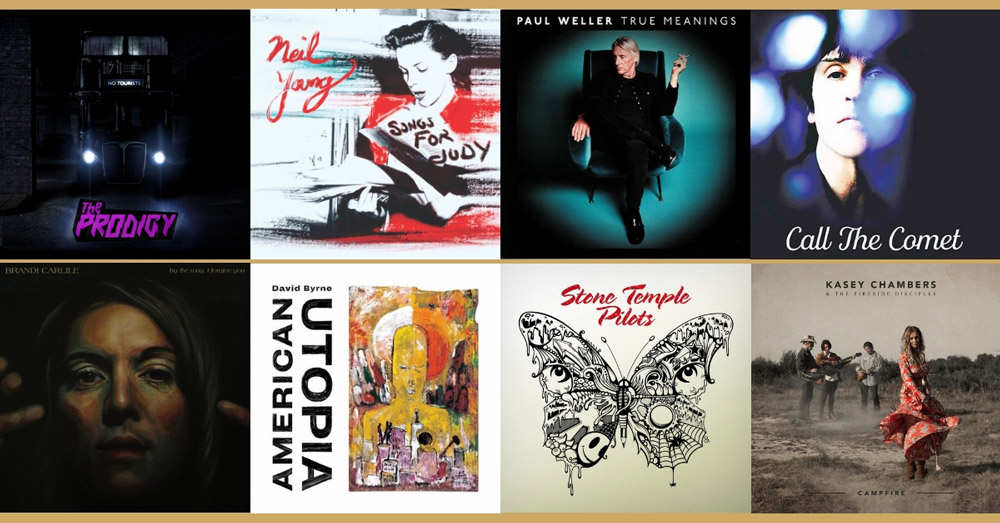 Yeah, we know it’s easy to sit back and say that all the good music has been recorded. But you needn’t rob yourself of enjoyment: ILYOS is here to tell you about 10 of the best new releases of the past year. This collection is just new releases, not including re-issues, but we've collated the best re-issues and box set collections of the year, here.

His recent tour was an unforgettable experience for anyone who witnessed it; Byrne himself has described it as “the most ambitious show I’ve done since the shows that were filmed for Stop Making Sense.” And it came on the back of his first solo album in 14 years; a Grammy-nominated and bold album that also ties in with his Reasons To Be Cheerful platform which collects “good news” as a “remedy and kind of therapy to the state of the world.” Get it here.

Kasey finished the year being inducted into the ARIA Hall of Fame; back in April, she released a stunning new album that realized the more personal dream of having her hero Emmylou Harris appear on one of her albums. Campfire relates back to her childhood spent living in outback Australia; back to the days when Kasey’s dad Bill first introduced her to the music of Emmylou and other country greats. Get it here.

Brandi Carlisle – By The Way, I Forgive You

Fans of Kasey could do a lot worse than also checking out the latest album from this superb American singer-songwriter, which has been nominated for 6 Grammys, including Album of the Year and Best Americana Album. Brandi’s songs have been covered by the likes of Dolly Parton and Adele, and “The Joke," was listed on Barack Obama's year-end playlist.

The former Jam and Style Council man continues to rack up Top 10 albums at home in the UK. His music these days is more acoustic-based and rustic than it was, but his writing remains vital, and Bowie fans will want to hear Paul’s tribute to their man. Get it here.

Another iconic Brit with a good head of hair, the former Smiths guitarist recently released his third solo album, in which he envisages a better world and provides a wonderful mix of contemporary and vintage sounds.  “Hey Angel” has all the hallmarks of classic British rock’n’roll past and present. Get it here.

The first album in 8 years – and the first album with new singer Jeff Gut - from one of the great hard rock bands of the grunge and post-grunge era. Preceded by the first single “The Art of Letting Go,” the album was well received by fans and critics alike and opened the door on another stage in the career, following the sad passing of original frontman Scott Weiland in 2015 and his original replacement, Chester Bennington in 2017.

From the sublime to… the ridiculously sublime! A glorious, fun-filled Benny & Bjorn-approved tribute to ABBA from an iconic performer whose musical legacy both predates and postdates the particular period that ABBA claimed as their own. What’s not to love! Get it here.

There’s more to Buble than that Christmas record. The singer considers his “most romantic record to date,” and sees it as a token of gratitude to his fans for the love and support he and his family have received throughout his oldest son’s ongoing battle with cancer. The original song “Forever Now” will tag the heartstrings of every parent who hears it.

It’s probably not going to replace Buble’s Christmas album in the public psyche, but the Monkees’ new album is great fun and features contributions from XTC’s Andy Partridge, REM’s Peter Buck,  Weezer's Rivers Cuomo and Adam Schlesinger of Fountains of Wayne. Check out this fab version of Paul McCartney’s 1979 Christmas hit and don’t forget to get your tix for The Monkees Present The Mike & Mickey Show, touring Australia in 2019. Get it here.

Okay, we’re sneaking this one in here as it features solo recordings from Neil 1976 American tour; recordings that have never been officially released before, but which are legendary amongst fans. That’s kind of “new” music, isn’t it? We said it before here, but this really is Neil at his absolute peak, and as essential as any live album he’s ever released before. If it had been released at the time, it would be one of the jewels in his catalog. If you have a Neil Young fan in your life, this is their present sorted. Get it here.

The Prodigy - No Tourists

The original rave-rockers return to form with an album that unapologetically delivers enough bass and beats to take you straight back to those legendary Boileroom sets at Big Day Out.