This week marks the 50th Anniversary of the self-titled debut album by rock’s first and greatest supergroup, Crosby, Stills & Nash, who would shortly become Crosby, Stills, Nash & Young. Let's celebrate by looking at the band’s beginnings and the impact of their classic eponymous album.

1969 was probably the year that pop stars became something more than pop stars.  They became Rock Stars; demigods of youth culture and big business both. By the final year of that most tumultuous decade, musicians – the super successful ones – had the power. Whereas previously the industry led the way, following a half-decade of startling progress from its key artists – the Beatles, Dylan, Hendrix, etc. – the smarter executives knew it was time to follow, and key artists were given previously unheard of freedoms. And the world was all ears. 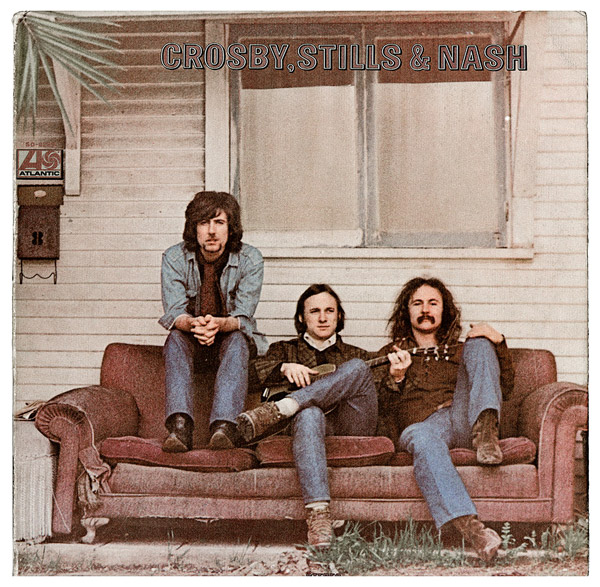 Atlantic Records already had massive success on the back of one new group – Led Zeppelin – having put their faith in Jimmy Page. In 1969 they signed another – a trio of individuals who had not even played a gig together. But they knew they were getting something incredibly special.

Stephen Stills was someone with whom Atlantic already had runs on the board. A Texan who moved out West in 1966 after a stint in New York’s Greenwich Village, Stills knew where things were at. As the primary voice of The Buffalo Springfield – the group he led with Neil Young – Stills’ star had risen meteorically before the band’s inner tensions forced its end. But, Atlantic knew that the man who less than two years ago had given them the youth movement’s call to arms “For What It’s Worth” – with the prescient opening line of “There’s something happening here” – had plenty more to give.

David Crosby was another well-known West Coast entity, having found fame and acclaim with the band who gave birth to the West Coast folk-rock sound, The Byrds. Like Stills, Crosby had spent time in the folk hot-bed of Greenwich Village, New York, earlier in the 60s – Crosby in a duo with African-American sing-songwriter Terry Callier – but he was a Californian native and returned home with Roger McGuinn to form the Byrds in 1964. Despite being a member of the Byrds for their first five albums, his contributions to the band were overshadowed by those of McGuinn and original lead singer/primary songwriter Gene Clark. He was sacked in 1967, not long his song “Lady Friend” had failed as a single, and not long after he appeared with the Byrds – and moonlighted with Buffalo Springfield alongside Stills – at the Monterey Pop festival. With Springfield having split, Stills and Crosby started working together informally.

Crosby and Stills came across the missing ingredient to their musical partnership soon after at a party at Mama Cass Elliot’s house. Graham Nash lacked the counter-culture credibility of the other two, but he had the voice, and when he harmonised with Crosby and Stills, the chemistry was evident. Nash had notched up numerous international hits with English band The Hollies but was becoming fast disillusioned with their conservative impulses, which had become more apparent following the failure of Nash’s brilliant “King Midas In Reverse” as a single. Graham was clearly looking for an out when he decided to spend some time in California.

In Crosby, Stills & Nash, each of the three principals found a perfect balance. Although Stills played virtually all the instruments on the first album, the songwriting and lead vocals were fairly equally shared, and of course, it took all three of them to create those unique harmonies. Their first album features some of their best-known songs, including Still’s incredible opener “Suite: Judy Blue Eyes”, Nash’s “Marrakesh Express”, and Crosby’s “Long Time Gone”, which the band bizarrely enough performed on The Tom Jones Show with Tom himself helping out.

Crosby Still & Nash was a massive success, helped in no small part no doubt by their performance at Woodstock a bit later in the year; a performance that was only their second ever in public! By that stage, Neil Young had joined, and CS&N had become CSN&Y, which kicked there ascent even further into gear.

But it didn’t last long. Following the release of their hugely successful second album Déj Vu the band split in July 1970. While recordings from the preceding tour would be released the following year as the classic live album 4 Way Street, Crosby, Stills, Nash & Young would not perform again until a 1974 reunion tour.

While all four members of CSN&Y recorded solo albums following CSN&Y’s surprisingly brief existence, only Stills and Young had resounding commercial success with their efforts. Stills probably peaked with the smash “Love The One You’re With” and his 1970 self-titled first solo album that featured guest appearances from Jimi Hendrix, Eric Clapton, Ringo Starr, Booker T Jones, and Cass Elliot as well as both Crosby and Nash; sadly his 1972 group with the Byrds’ Chris Hillman called Manassas failed to achieve much at all commercially.  Young of course exceeded Stills’ successes with 1972’s Harvest which made him a solo superstar. David Crosby & Graham Nash both scored Gold albums with their respective solo debut albums If Only I Could Remember My Name and Songs For Beginners – both remain much-loved (especially in recent year’s Crosby’s out-there effort) – and they also had Top 10 success with their first album as a duo in 1972 as well.

Of course David Crosby, Graham Nash and Stephen Stills – and Neil Young – have all maintained long and fascinating careers, but it was undoubtedly the fruits of their shared labours that set the stage for any and all commercial successes that followed. And those harmonies – that sound we first heard on that first album 50 years ago would - of course influence the next decade of Californian music (The Eagles, Fleetwood Mac and numerous others) and change the course of popular music around the world.