Joy Division’s 40th Anniversary Of Closer: This Is The Way, Step Inside

Joy Division’s 40th Anniversary Of Closer: This Is The Way, Step Inside

Joy Division’s final album, Closer remains, to this day, as icy, mysterious and all-knowing as it was when first released on July 18th in 1980. The post-punk masterpiece is an opus of euphoric doom, neither dark nor light – simply intensely honest. The album’s release was as much overshadowed by the death of the band’s unwavering 23-year-old frontman, Ian Curtis, who took his own life two months before the album’s release, as it was prophesied by it.

While Closer will forever be an unsolvable puzzle – were Ian Curtis’ compellingly stark lyrics confessional or foretelling? – musically, it instigated an icy sonic revolution that has left its mark on almost everything that followed. Emotion-driven rock; dark, romantic new wave; 80s electro-pop to the modern mainstream hits we hear on the radio today; their foundations can all be traced back to this album with little more than scratch beneath the surface.

With a very special, deluxe-edition reissue of Closer on its way, celebrating 40 years since its release, we thought it the perfect time for a deep dive retrospective into the album considered widely by fans and critics alike, to be the evolutionary link between the past, present and future of music.

On the surface, songs like album openers “Atrocity Exhibition” and “Isolation” conjure images of relentless gloom and darkness, yet they turn pain into a euphoric release, resulting in music that sounds expressly alive. Whether you view the album through a lens of darkness or a void of rose-coloured light, it’s a story of rebirth, the cycles of life that ironically teach us how little we know the more we learn. What is remarkable, is that the calm, confident, voice of shining composure that compassionately takes you by the hand from the outset – “this is the way – step inside” – belongs to a 23-year-old man, yet to explore the wider world to any great extent.

It’s a theme that pervades the whole album with a lingering, unanswered question – is understanding true agony the path to experiencing pure beauty? It’s an intensely honest, monolith of perception, purely original and not yet sullied by success.

The band’s progression from Unknown Pleasures showed a pronounced significance on electronics that would unalterably influence modern dance and pop music. The addition of robotic synths and euphoric flourishes would be further explored by the remaining members' follow on group New Order, but the origins of this revolutionary genre-bending can be clearly heard on the album’s moody but danceable songs like “Heart and Soul,” “Decades” and “Twenty Four Hours.”

Out of the darkness comes a new consciousness of music’s place in pop-culture. An unleashing of emotions that neither yells at you nor challenges you – it sympathises with you through the very relatable and universal vulnerability that makes us human. Closer shines bright in its darkness because, despite being an in-your-face lamentation on the inevitability of despair, it seeks the light, searches for happiness and bravely strips itself bare to hopefully inspire such emotional honesty from its listener. 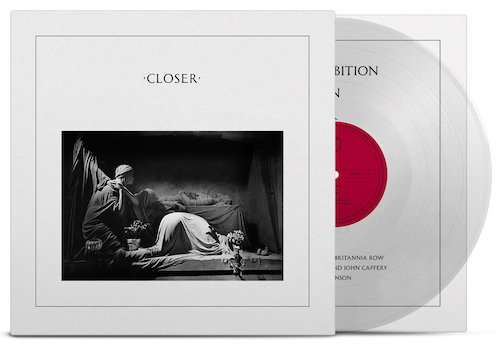 In addition to the original LP tracklisting, non-album singles “Transmission,” “Atmosphere” and “Love Will Tear Us Apart” will be reissued on the same day with fresh 2020 remastered audio. Since the demise of Factory records, these singles have never been repressed or reissued before and are cut on 180g vinyl, featuring the original artwork on heavyweight board. Pre-order HERE.

“Love Will Tear Us Apart”

Closer comes with a message beyond words, the majesty of experience speaks for itself. In the words of Curtis: “This is the way, step inside.”

Listen to Closer on Spotify:

Listen to Closer on Apple Music: