Peter Green, who is spoken of in the same breath as his contemporaries Eric Clapton, Jimmy Page and Jeff Beck, led Fleetwood Mac in their early years when they forged their the way as one of Britain's most progressive and popular blues band. Green had met Mick Fleetwood and John McVie in John Mayall's Bluesbreakers, who he joined in 1967, replacing Eric Clapton. By 1968 he'd decided to form his own band with Fleetwood and McVie and guitarist Jeremy Spencer. The band was originally called Peter Green's Fleetwood Mac featuring Jeremy Spencer. Green would remain with the band until 1970, when he turned his back on success to join a commune and began to spiral due to mental illness. He maintained a low profile until the late '90s when he formed the blues-oriented Peter Green Splinter Group.

In the decades since Peter Green turned his back on Fleetwood Mac, his stature as one of rock's greats grew, and a number of his songs became iconic. His best-known songs are probably "Oh Well", which Lindsay Buckingham and now Mike Campbell perform with Fleetwood Mac in honour of their predecessor (Campbell also used to play it with Tom Petty in his Heartbreakers days), and "Black Magic Woman", which was a huge 1970 hit for Santana. His last single with Fleetwood Mac, the intense and terrifying "The Green Manalishi" was later covered by Judas Priest. Like the music of Cream and Led Zeppelin, Peter Green's work with Fleetwood Mac had a profound influence on subsequent generations of hard rock and heavy metal artists, Metallica included.

While full details of the project are yet to be disclosed, Rufus has announced that Kirk Hammett recently recorded something for it at Abbey Road studios, using Green's classic 1959 Les Paul, which Green sold to yet another iconic blues and hard rock guitarist Gary Moore 47 years ago. Hammet and Green were later photographed at Green's house with the guitar.

“The concert is a celebration of those early blues days where we all began, and it’s important to recognise the profound impact Peter and the early Fleetwood Mac had on the world of music,” Mick Fleetwood has said. “Peter was my greatest mentor, and it gives me such joy to pay tribute to his incredible talent. I am honoured to be sharing the stage with some of the many artists Peter has inspired over the years and who share my great respect for this remarkable musician.” 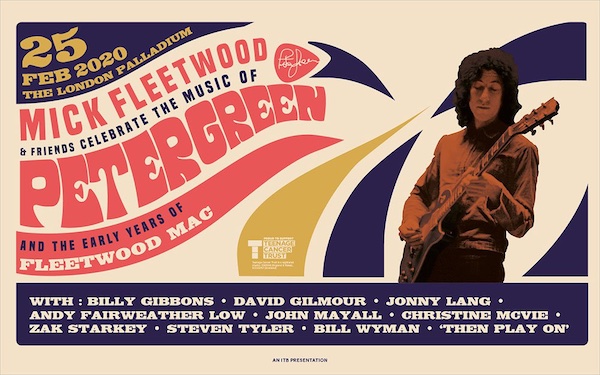 "The Green Manalishi (With the Two Prong Crown)"

"Man of the World"