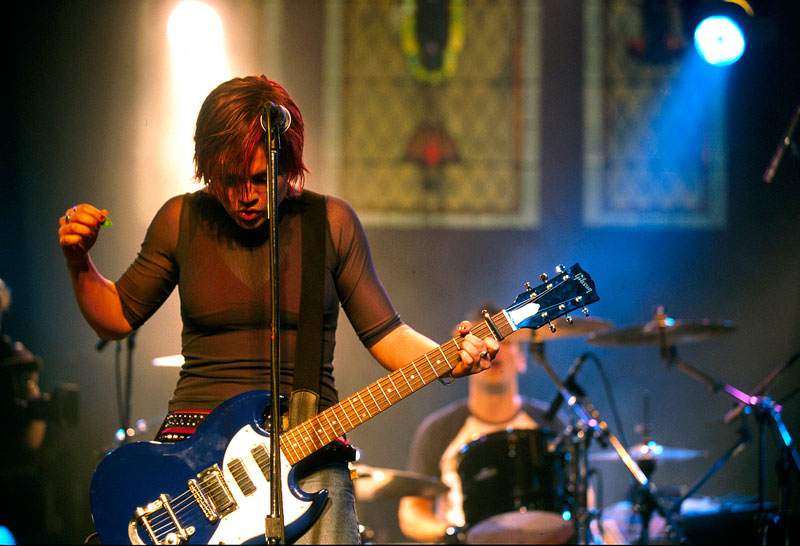 Aussie rockers The Superjesus have today announced a fairly hefty 20th Anniversary tour celebrating their 1998 ARIA #2 album Sumo. As well as the tour, the album will be reissued on CD and coloured vinyl, and includes a never before heard amped up cover of Kylie Minogue's "Confide In Me" which fits in beautifully with the heavy sludgy guitars on the rest of the record. The CD version features bonus material sourced from triple j’s Live At The Wireless archive too. All formats will be released on August 17th and are available to pre-order here.

Initially known as Hell’s Kitchen, The Superjesus received national radio play with their debut 1996 EP Eight Step Rail and became a festival favourite at Big Day Out throughout the ‘90s. Inducted into the South Australian Music Hall of Fame in 2017, The Superjesus have much to celebrate – and celebrate they will with this extra-special edition of Sumo.

Reflecting on the life-changing record, frontwoman Sarah McLeod says, “(When Sumo came out)…everything went big time. It was terrifying and exciting all at once. We worked so hard on that album… To be sitting here talking about it 20 years later, knowing that it was an important part of Australian music history and affected so many people along the way…it feels like an incredible achievement. We had no blueprint of how we wanted to sound - of course we had our influences, but it was the combination of those influences that made us become The Superjesus.”

Included in this massive Sumo re-release is the never-before-heard version of Kylie Minogue’s "Confide In Me". The track holds particular pertinence for frontwoman Sarah McLeod, since it was the number one single on the ARIA Singles Chart the month in which The Superjesus first formed in 1994. This interpretation is heavy as hell, and it’s got that undeniable Superjesus taste. “I have always been a Kylie fan,” says Sarah. “Back in 96 we recorded a really heavy version of Confide In Me, just for our own amusement. No one ever heard it, I can’t even find it to hear it now... I went to the guys and reminded them of the recording, and went straight home to work up a demo of it. Within a week we were playing it live on the festival stage and it seemed like the perfect addition to the Sumo – 20th Anniversary edition.”

The Superjesus set to hit the road later this year to celebrate all things Sumo – and the experienced rockers are more than ready to give fans what they’ve been waiting for. With a couple of massive festival slots under their belt for this year already The Superjesus are back in a big way. Stoked to be back in touring mode, Sarah says, “Touring is all about stamina and momentum. In the 90's we used to tour non-stop, we would play 5 to 6 nights a week for months to years at a time. This kind of momentum makes the band so incredibly tight - nothing else on earth can make a band better than by playing every night in front of a crowd. Since the 90's we have not toured like this… We want to embark on this tour with no fear like we did then!” Bassist Stu Rudd gives fans a taste of what to expect from the massive shows, “We have not played some of the tunes we’ll be playing on this tour for years, seriously - YEARS! It’s going to be one hell of a show, playing Sumo in full, then following up with some faves as well! We are so pumped for this tour!”

Tickets go on sale on June 21st from Oztix, here.