Kick Out The Jams, These Classic Albums From 1969 Are 50 Years Old

Kick Out The Jams, These Classic Albums From 1969 Are 50 Years Old 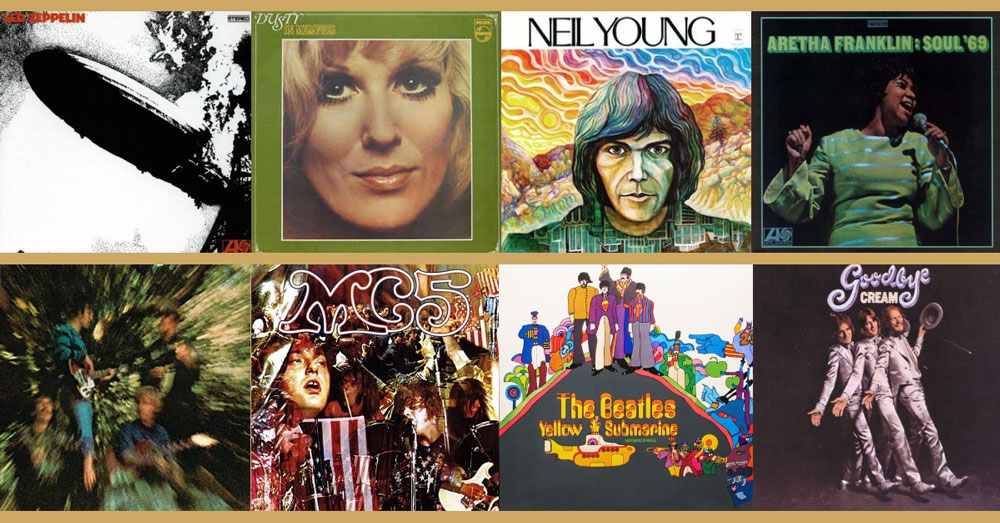 The 60s were the most creative decade in rock. That is surely undebatable: what other decade has revealed anything like the development embodied in the progress from Chubby Checker to Jimi Hendrix? As the decade was nearing its end, progress remained unabated. 1969 kicked off with the release of two of the most dynamic debut hard rock albums ever – by Led Zeppelin and the MC5 – and the ensuing months saw the arrival of other influential new artists in the fields of country rock – the Flying Burrito Bothers - and progressive rock – Genesis.

ILYOS presents a dozen of the best albums from the first quarter of 1969.

The first of three Creedence albums that would be released in 1969, and their first great album. John Fogerty still remains a remarkably unsung figure in rock history when you compare him to contemporaries like Robbie Robertson from the Band, who similarly mined Southern American roots music to create new and bold sounds. Fogerty has always been seen as a less authentic writer than his peers, probably because he didn’t hang out in the right circles. Bayou County is where Creedence really got their swamp thing going on groovers like the phenomenal title track, “Graveyard Train” and “Keep On Chooglin’.” And then there is the peerless “Proud Mary,” the first of Creedence’s five #2 US singles and a song so great that authentically Southern artists like Solomon Burke, Ike & Tina Turner, and Elvis amongst others would immediately try to make it their own.

Oh to have been a teenager when this first appeared, to truly experienced its arrival. The opener “Good Times Bad Times”, a fantastic song and probably the closest Zeppelin ever got to a pop song, is like a bridge that takes you from sort of normality into a new hard, heavy and hot future reality, straight into the gut-punch that is “Baby I’m Gonna Leave You”. But it’s “Communication Breakdown” for me that is the album’s greatest gift – the past present and future of hard rock all rolled into 2:27 of untouchable dynamics and energy.

The soundtrack to the Beatles’ ground-breaking animated film was a rare backward step for the band musically – the title track had originally appeared on Revolver in 1966, and “All You Need Is Love” was from 1967. Of the few new songs, two were George Harrison’s, which seems to make George Martin’s comments about the material seem a bit churlish: “The dregs of their inventory. Pieces they would, in any case, jettison: junk, file-and-forget pieces…” Off course, most fans no doubt enjoyed Harrison’s “Only A Northern Song” and “It’s All Too Much” and John & Paul’s “Hey Bulldog” a lot more than Martin’s orchestral soundtrack material that made up side 2.

Primarily known as a singles artist, Aretha had, of course, released some classic albums before. But Soul 69 came out at the zenith of Aretha’s influence on the rock world and critics loved it, even though it contained no hits. Southern writer and Stones confidant Stanley Booth said in his Rolling Stone review of the album that Soul 69 was "quite possibly the best record to appear in the last five years," describing it as "excellent in ways in which pop music hasn't been since the Beatles spear-headed the renaissance of rock." One of the album’s singles was a wonderful cover of John Hartford’s great “Gentle On My Mind.”

Neil’s self-titled solo debut was an inauspicious start to the solo career to come, which was made doubly surprising by the success he’d already seen with Buffalo Springfield, the band he and Stephen Stills had formed in 1966. Neil’s album was first released in November 1968, but problems with the mix meant that it was withdrawn and re-released a couple of months. The album, which was produced by Neil’s longtime producer David Briggs and which featured Ry Cooder on guitar – this is pre-Crazy Horse – doesn’t feature any of the classic songs from Neil’s cannon but is of course still well worth a listen.

Looser and sloppier than Led Zeppelin but running on unprecedented and absolutely electrifying energy levels, the MC5 came out of Detroit preaching revolution and ultimately came undone after one too many attempts to stick it to to the man. It may not have been commercially smart to debut with a live album either, although history is glad they did. In the end, they inspired generations of punks and metal bands (Lemmy always said he originally wanted Motorhead to be like a British MC5) and their influence is these days ubiquitous. Turn up  “Kick Out The Jams” as loud as you can and plug yourself into the vivacious virility of the Five!

As considerable as their influence and popularity are today, Eric Clapton, Jack Brice and Ginger Baker’s groundbreaking power trio were a short-lived outfit who only released 3 studio albums, all in relatively quick succession, between 1966 and 1968, plus this split studio / live set with which they farewelled their fans. Kicking off with a great (and long – over 9 minutes) “I’m So Glad,” the album also contained the band’s final single, the atypically melodic Eric Clapton-George Harrison co-write “Badge.”

The Flying Burrito Brothers - The Gilded Palace of Sin -  February 6

When the Byrds founding bass player Chris Hillman split with Byrds newcomer Gram Parsons to form a new band, they wanted to delve deeper into country music, and they created what was pop’s first dedicated country-rock band in the process. Not particularly successful at the time, Gilded Palace of Sin is a stunning and ground-breaking collection that emboldened many other young country fans in pop – the likes of Mike Nesmith of the Monkees, Ritchie Furay of Buffalo Springfield (who would soon form Poco) and Linda Ronstadt of the Stone Poneys – to more confidently follow their muse. It also provided a template – and shortly a band member in the form of Bernie Leadon – for Glenn Frey and Don Henley’s soon to be formed Eagles.

Awkwardly following Neil Young’s solo debut by a matter of weeks, the classic Springfield collection was the highest charting, and best-selling release by the band Young fronted with Stephen Stills and Ritchie Furay. It came after Stills had hooked up with David Crosby and Graham Nash, and a month after Furay and his new band Poco recorded their first album, which would come out in May. The classic collection includes Young evergreens “Mr. Soul” and “Broken Arrow,” and Stills’ powerful “For What It’s Worth.”

Like the MC5, with whom they shared a few bills, New York’s Velvet Underground were a lot more influential than they were successful. Indeed, the Velvets can be said to be one of the most influential bands in all of rock; they very much were the first to come to connect rock with the arts underground. Of course, leading man Lou Reed did have considerable solo success, but his work with the Velvets remains more influential, and the band’s third album – their first without co-founder John Cale – contains such classic Reed tunes as “What Goes On,” “Candy Says” and “Pale Blue Eyes.”

Genesis - From Genesis to Revelation - March 7

A much less auspicious start than that of fellow Brit’s Led Zeppelin, Genesis’ debut album was the result of a one-off deal with Decca and an ill-advised pairing of the young band, who were all still attending the same school in Surry, with former school alumni and budding pop Svengali Johnathan King. The album was recorded during school holidays, and apparently, after a year, had sold a mere 649 copies. The album had been preceded by a couple of singles, including their debut “The Silent Sun,” which was a Bee Gees pastiche co-written by Peter Gabriel and Tony Banks. At this point the band was not even playing live – that would starting happening later in the year, at which point the group began making inroads. Phil Collins and Steve Hackett would join in 1970 and early 1971 respectively.

American soul music had a massive influence on ‘60s rock going back to the earliest Beatles days, but by late ‘60s its popularity amongst a new generation of serious music audiences had grown exponentially, and the works of the likes of Aretha Franklin and the late Otis Redding were seen as benchmarks by all in rock and pop circles. When great English hitmaker Dusty Springfield became label mates with Aretha on Atlantic, she wanted to get closer to the source, and the resulting album is one of soul’s most celebrated works. Although originally written for Aretha, Dusty, of course, made “Son of A Preacher Man” her own.