Ever had a hankering to combine your love of music with moving a token around a board, toggling an avatar or bashing a couple of flippers? You’re not alone! Ever since Milton Bradley released The Beatles game Flip Your Wig in 1964, rock and pop groups have been licensing themselves for home entertainment formats. With a recently released David Bowie Monopoly sure to be filling plenty of fans’ Christmas stockings this year, I Like Your Old Stuff takes a look at some memorable games released through the years.

Following in the footsteps of acts including ABBA, AC/DC, Metallica, The Beatles, The Rolling Stones and Queen, the late David Bowie passes Go and collects a big cheque from Mr Monopoly. Bowie’s album eras are very effectively and chronologically bundled into the classic coloured groups (comeback albums Blackstar and The Next Day take the Mayfair and Park Lane slots), although both his debut self-titled album and Heathen are among his albums overlooked for a space. Complete with tokens including a Space Oddity astronaut helmet and a Ziggy lightning bolt, it looks like this release proves Mr Bowie was wrong when he sang "It’s No Game" on Scary Monsters (And Super Creeps).

Duran Duran – Into The Arena

Milton Bradley knew what they were doing when they released this game in 1985, ensuring teen fans could just swoon at the pics of Nick Rhodes, John Taylor, Simon Le Bon, Andy Taylor and Roger Taylor if they became too perplexed by the game play. Given the rules around collecting matching discs, moving to the inner circle and stealing from opponents, it sounds more baffling than the lyrics to "The Reflex". 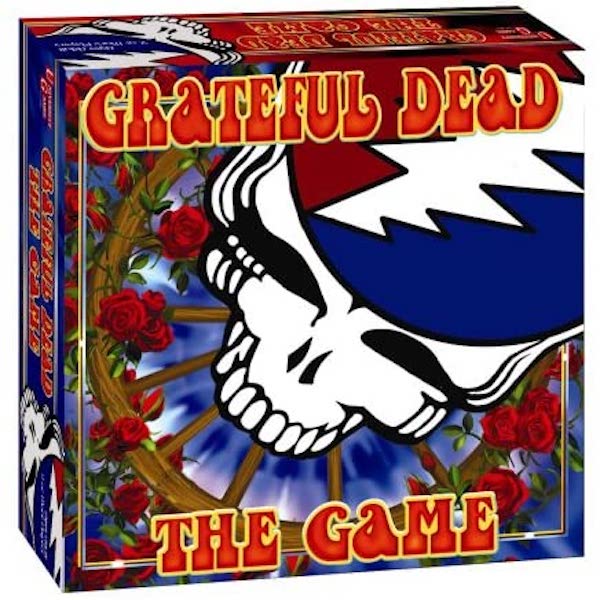 Casual players would no doubt be hoping a round of Grateful Dead: The Game didn’t last as long as one of the San Francisco’s hippies’ interminably noodling live shows. This 2006 game required a strong knowledge of the group’s output, given challenges included guessing the song your opponents were humming, picking missing lyrics and answering obscure facts about tour dates. And this is supposed to be fun? Sounds like you’d be better off grabbing a container of Cherry Garcia, hopping in the bean bag and tuning in, turning on and dropping out.

Iron Maiden’s evolving mascot Eddie’s various guises over the past 30+ years were put to good use in this 2014 boardgame, which saw players travelling through space and time to collect T-shirts, albums and useless trinkets. How very metal. 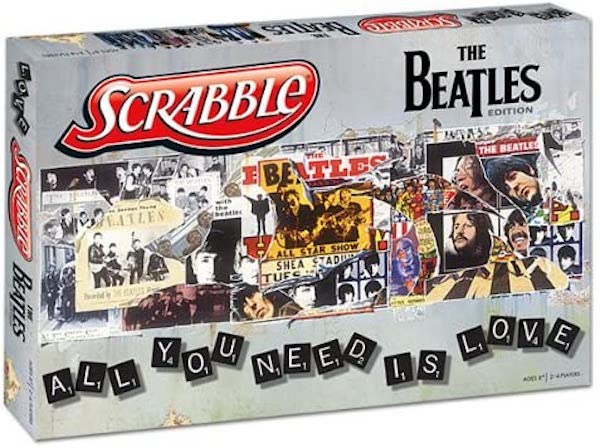 If you’ve always been bummed official Scrabble rules don’t accept words such as Ringo, Eggman, and Jai Guru Deva Om, perhaps The Beatles Scrabble will provide you the inner light. The 2012 Fab Four edition of Scrabble – shock horror! – saw players using game cards, putting words on the board backwards and allowed to play proper nouns if they were linked to The Beatles. If it’s all too much, maybe you might like to try The Beatles’ Yellow Submarine Lego instead. 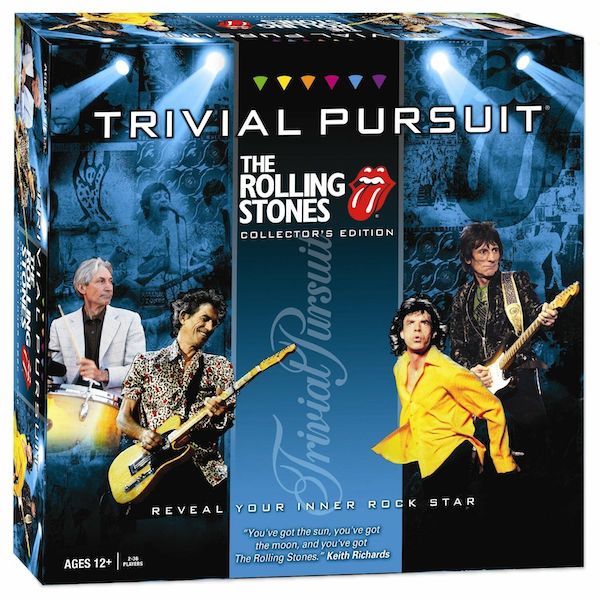 What was Brian Jones’ favourite swimming stroke? To the nearest tonne, how much cocaine did Keith Richards snort between 1965 and 2000? Which country is home to the largest number of Mick Jagger’s illegitimate children? Sadly these questions didn’t make it to Trivial Pursuit’s 2010 The Rolling Stones Collector’s Edition, but fans should still find plenty to motivate them into tumbling dice. You know the deal: take turns to go around in circles, put up with endless questioning and end up bickering with old friends by the end. Just like the real Stones, eh? 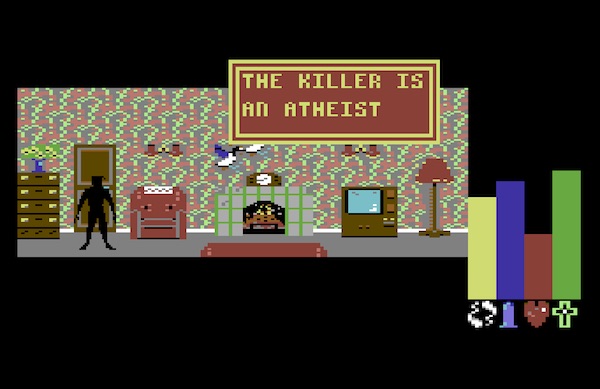 When board games became a bit passe in the ‘80s, some artists opted for new digital technologies to wow the fans instead. UK chart-toppers Frankie Goes To Hollywood welcomed fans to their Pleasuredome via a Commodore 64 and Spectrum game in 1985. Retrospectively labelled “one of the most innovative games of the 8-bit era” by the Den Of Geek website in 2015, this strange game featured none of the band. Players were instead set a series of Cluedo-esque tasks to solve, with screen prompts such as “The jacket will free you from pain” and “20 flowers make a bunch” having a Bowie-esque cut-up feel to them. Such innovative gameplay came at a cost. Hanging out at a mate’s place who had Frankie on his Commodore 64, it would take so long to load the first screen we’d get bored and decamp back outside before a skerrick of gameplay took place. 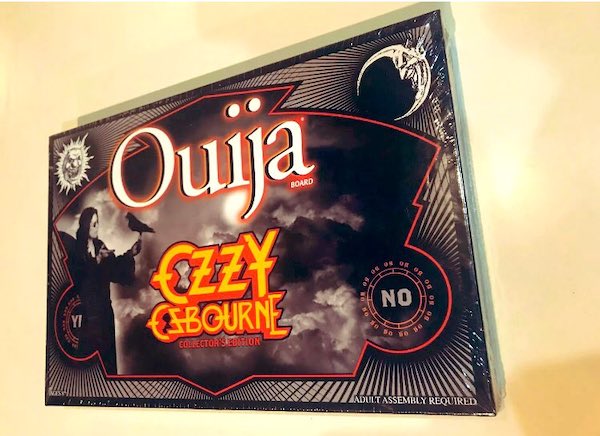 An alarming conduit to the afterlife… vaguely intelligible messages… a terrifying taste of supernatural horrors… But enough about poor old Ozzy Osbourne; how about this great merchandise tie-in from the Black Sabbath frontman? Fans who bought VIP tickets to Ozzy’s US tour dates in 2010 and 2011 received their very own Ozzy-approved Ouija board, a special Hasbro game that was never available in stores. Whether fans were able to contact the dead via the device – or perhaps put in a song request or two with the (other) Prince of Darkness – is unknown. 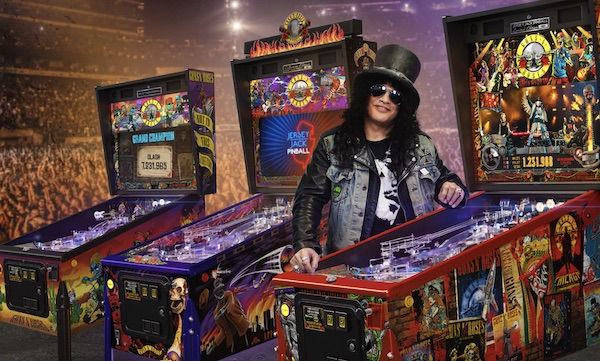 Following in the footsteps of acts such as The Rolling Stones, Elton John and KISS (who, let’s face it, have had the merchandising market sewn up for more than 40 years), Guns N’ Roses first released an official pinball machine in 1994. A quarter of a century later, they’ve upped the ante with the impressive 2020 Not In This Lifetime game. Working in conjunction with GN’R guitarist (and pinball fan) Slash, Chicago company Jersey Jack Pinball has created a machine with more bells and whistles than Axl Rose’s backstage rider. If you’ve got around $15,500 burning a hole in your pocket, you can pick up the Limited Edition new game in Australia exclusively from Pinball Sales. 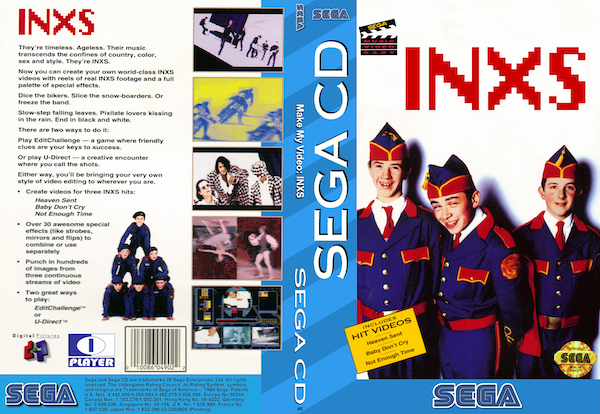 One of the less remarkable titles on this list, INXS entered the home entertainment market with 1992’s lamentable Make My Video for the Sega Mega-CD console. The Mega-CD was an early innovator in the move from 16-bit cartridge systems to disc-based technology, but INXS – Make My Video was a massive flop. Joined by similarly whiffy titles from Marky Mark (Wahlberg) and Kris Kross, the Make My Video series gave players the exciting chance to re-edit music videos with effects such as strobes (!), mirrors (!!) and flips (!!!). If this is starting to sound like a bland version of Homer Simpson’s “star-wipe” fetish, consider this: the series ranked at number two on Electronic Games Monthly’s 10 Worst Games Of All Time list in 1997. And what a gloriously steaming number two it is, too. Sorry boys, but this tedious game was certainly not "Heaven Sent".

What are your favourite games featuring music’s shining lights? Head to the I Like Your Old Stuff Facebook page to let us know!