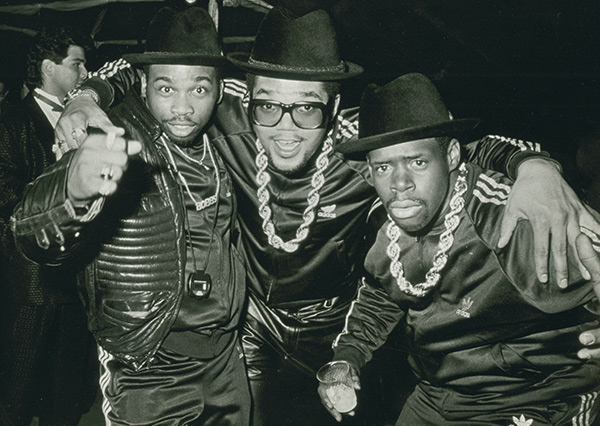 When hip-hop first made its way into early 1980s pop culture it couldn't have been more diametrically opposed to rock and roll. With its basis in rhythmic, vocal expression, the genre developed through artists exploration of social and political adversities. At a time when mainstream rock had matured beyond its early counterculture origins, young rappers with fight and fire were starting to take centre stage.

Art always finds a way to break down barriers, and that’s precisely what happened in the mid-80s when artists began experimenting, sampling and collaborating. The success of these early cross-genre collaborations proved to be a catalyst for creativity that would eventually inspire a whole new era of rap-rock bands decades later.

"Walk This Way" from Aerosmith’s 1975 album, Toys in the Attic was a successful breakthrough single for the band when it was first released, but took on an entirely new life in 1986 when Run DMC covered it on their album, Raising Hell. This cover was a commercial first for the melding of rock and hip-hop and a pioneer of the rap-rock artists who followed.

The music video symbolically introduces the two bands engaged in a musical duel in neighbouring rehearsal studios. Joe Perry plays the famous guitar riff over Run DMC’s beats and Steven Tyler breaks through the studio wall with a microphone stand to add his signature rock wail over the rap. It was the first hip hop hybrid video ever played in heavy rotation on MTV.

Not only does Puff Daddy’s “Come with Me" - from the 1998 Godzilla soundtrack - feature live guitar parts from Zeppelin guitarist, Jimmy Page, it was also produced by Rage Against The Machine’s Tom Morello!

R&B, classic rock and rap-metal might sound like a recipe for disaster, but somehow the ascending orchestral / guitar into from Led Zeppelin’s "Kashmir" (1975) blends seamlessly with the rap verses to create the perfect suspense driven theme song for a monster destruction movie.

READ MORE: HOW THE WORLDS OF HIP-HOP AND HEAVINESS COLLIDED

In 2009 rapper Jay-Z used a substantial portion of the classic Alphaville hit "Forever Young". Produced by Kanye West, with British singer Mr. Hudson on vocals, it completely retains the melody of the original, and peaked in the top 30 in the Aussie charts.

Another track featuring era-relevant appropriation of a protest song is Public Enemy’s “He Got Game” released on the soundtrack to Spike Lee's 1998 film of the same name. The song pivots around the alternating guitar harmonics from Buffalo Springfield's "For What It's Worth" (1966).

Stephen Stills was inspired to write the track about the Sunset Strip curfew riots of 1966 - a series of early counterculture clashes that incited violence between police and young people. Public Enemy drop Stills’ original verse into their track, eerily proving it to be even more relevant three decades later.

Buffalo Springfield "For What It's Worth":

“Rock Hard” was released by the Beastie Boys all the way back in 1984 and samples the famous guitar riff from AC/DC’s “Back In Black”, that had only been released 4 years earlier in 1980.

The instantly recognizable riff gives the hip hop track attitude and pose, but it was so early in the sampling game that the Beastie Boys didn’t know to get permission to use the sample, and AC/DC didn’t really know what sampling was. Failing to find a compromise between the bands, the song was removed from print until a European reissue in 2007 brought it back to light.

Cypress Hill have said that they were high on mushrooms while recording their 1993 album, Black Sunday. Black Sabbath have said they’re 1970 song “The Wizard” was a little bit about Gandalf from The Lord Of The Rings and a little bit about the band’s drug dealer – it’s not hard to see what inspired Cypress Hill  to sample Sabbaths haunting licks in, “I Ain’t Goin’ Out Like That”. With both bands already sitting on the dark side of their respective genres, the combination creates a genuine, horror-movie-quality, creepy vibe.

"Sing for the Moment” was released on Eminem’s fourth album, The Eminem Show (2002) and samples the intro of Aerosmith’s "Dream On". No strangers to hip hop/rock collaboration, Aerosmith themselves actually feature on the recording with guitarist, Joe Perry laying down a whole new solo for the track and Steven Tyler’s vocal creating a powerful call and response chorus that effectively doubles down on the sentiment shared by both tracks.