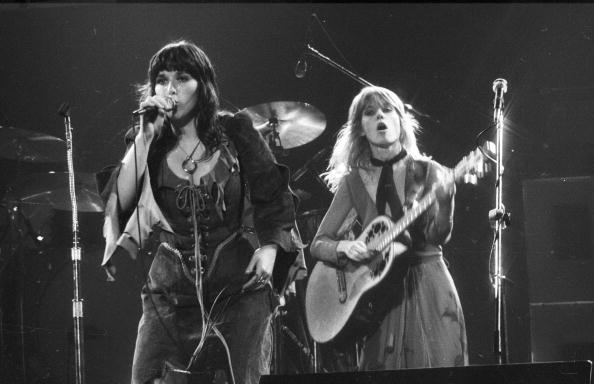 From the Wilson sisters of Heart to the DeLeo brothers of Stone Temple Pilots, there's just something magical about the musical connection between siblings.

Off the top of your head, you might think of just three of four bands that contain siblings, but the more you think about it, the deeper the rabbit hole goes. There’s basquillions. That’s a real amount, it’s more than ‘heaps'. Here’s a few of our fave's.

Dean and Robert DeLeo on guitar and bass respectively make up half of this SoCal band. And it’s a band that I came to love through their album Core. I had never heard anything like it, even though they were associated with the grunge genre, they had something else. They were raw and gritty but owned a swagger and polish that Scott Weiland brought to the group.

Have a listen to this one from the band with new vocalist Jeff Gutt, and you can definitely hear the similarity with Scott, and for me, this is a great fit. Not because he sounds like Scott, but because that ‘type’ of voice suits the music they make. The new self-titled album is available here.

This is probably the most obvious band that springs to mind when you talk about siblings in a band. Malcolm and Angus started this band in their bedroom and there’s nothing I can write here that hasn’t been written before about them. They wrote and recorded, the soundtrack to so many lives.

I remember being on a bus, at school, waiting to go to camp in year 7 and we had this BLARING on a crappy boombox. It was awesome.

Ben and James Johnston on drums and Bass respectively.

This powerhouse 3 piece from Scotland fast became a favourite of mine back in 2009 when I was introduced to their music when I was working at Fox FM. Until then I hadn’t heard of them, despite them having four previous albums. They are heading to Australia next month, info and tickets here. This was the song that started it all for me.

OK, before we talk about the Fogerty brothers, let’s talk about how prolific they were. 7 studio albums in just 5 years together, and from that, over FORTY compilation albums have been released to date. FORTY! That’s skinning some cats right there. Anyway, brothers John and Tom on lead vocals/guitar and rhythm guitar respectively created something truly spectacular with CCR. To the uninitiated, they sound like they’re from the south, not the San Francisco Bay Area, such was their beauty and charm, they fooled many.

Formed in 1977, recording their first album in February of 1978, and landing their first hit with "Sultans Of Swing" in 1979 (re-release), Mark and David Knopfler didn’t muck around with their new venture in Dire Straits, and went on to become one of the worlds most commercially successful bands of all time selling over 100 million albums worldwide.

Vincent Paul Abbott and Darrell Lance Abbott, aka, Vinnie and Dimebag, founded Pantera in Texas way back in 1981 and after a few years of glamming it up, they hit their straps good and proper with the release of Cowboys From Hell some 9 years later in 1990. That album would thrust them onto the worldwide metal stage and soon they would join the upper echelon of touring metal bands.

Ann and Nancy Wilson are two of the greatest women in rock and have been the constant center of the band since 1973. Their style fuses everything from pop-rock to heavy rock with hits including "All I Wanna Do Is Make Love To You" and "Barracuda". But, there are not many people that can say they bought a tear to the eye of an emotional Robert Plant by covering a Led Zep classic...

Joel (guitar/vocals) and Ryan O’Keefe (drums), a couple of likely lads from Warrnambool, and these brothers in arms have created a monster in Airbourne and their success, most notably overseas, is incredible. Why they’re not as big here I’ll never know, and it’s criminal. They’re a good time party rock and roll band that go full noise always, and it’s the sort of stuff that we should stand proudly behind as Australians. These guys have also lent their music to a slew of media, including video games and if you listen closely to the new Kobra Kai trailer, you’ll notice they’ve snagged a spot in that too.

Straight off the bat, I’m a DLR fan, so that’s the era I prefer when it comes to Van Halen, just wanna get that out there.

Now more than ever, Van Halen is a family band, Eddie (guitar), Alex (drums) and Eddie’s son Wolfgang (bass) all playing. They’re more like the Partridge family now, I wonder if they have a big yellow bus? Talk about bands that turned the musical world on it’s head, thanks largely to Eddie Van Halen, arguably in the top 3 most important and influential guitarists of all time. Van Halen, definite sibling power.

Debbi and Vicki Peterson on drums and lead guitar respectively, joined by the incomparable Susanna Hoffs on vocals and guitars gave us monster hits like "Walk Like An Egyptian" and "Manic Monday". But it's this riff that sticks with you...

Ya know what, I’m gonna stop there because I could just keep going and going, and I wanna hear about your favourite sibling bands. Start thinking, rack the brains and tell us about some of the great sibling bands over on our Facebook page.