In this new documentary, The Making Of Take On Me, the members of a-ha take us on a trip down memory lane, detailing the story behind the writing of their smash hit, “Take On Me” as well as the making of the iconic music video. Weaving together new interviews with band members, Magne Furuholmen, Morten Harket and Pal Waaktaar, and spotlighting the key people who were instrumental in the phenomenal success of the song.

Episode one kicks off with the artists reflecting on the song's lasting and impactful legacy that continues to influence each new generation of pop creators. Guests include Nile Rodgers, Ed Sheeran and James Blunt.

a-ha singer, Morten Harket remembers being mesmerised when he first saw bandmates Magne Furuholmen and Pal Waaktaar perform with their previous band at his school. The teenagers were already sure of the path they wanted to forge and worked relentlessly on their craft, rehearsing anywhere they could. Astonishingly, the pair came up with the riff that would forever define modern pop when they were just 15 and 16 years old while jamming in a kindergarten bomb shelter.

A&R legend, Alan Wickham recalls his first encounter with the Norwegian superstars and hearing them play “Take On Me” for the very first time, saying: “… I couldn’t believe my ears. How could someone look like a film star and sound like Roy Orbison?”

Amazingly, “Take On Me” didn’t take off right away. The band had three unsuccessful attempts at releasing the song, including a performance music video that didn’t stick. But the trio were sure enough of the song’s massive potential to lobby the record company for another shot. Alan Wickham paired them up with producer, Alan Tarney to create the famed version that remains one of the greatest pop songs of all time.

Episode 2 will look at the making of the iconic music video that sealed the deal of for the Norwegian superstars.

This Friday is the release of the brand new expanded edition of Hunting High And Low which features rare and unreleased demos, remixes and an early version of "Take On Me". Get it here. Superfans will love this limited collectors coloured vinyl too - a stunning light blue 7" vinyl pressing of "Take On Me" which celebrates the launch of the documentry. Get it here. 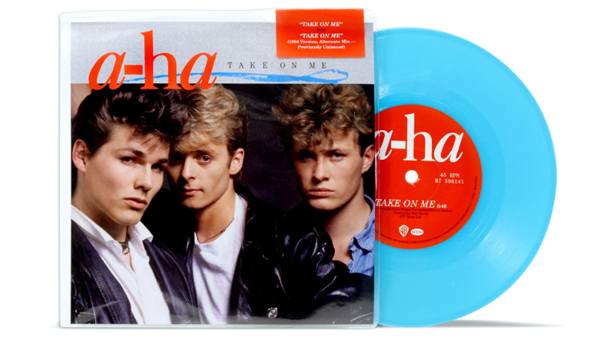 a-ha will visit Australia in early 2020 supported by Rick Astley, you can catch all the tour dates here.

And, if you're a superfan and want a chance to meet the band in Norway, check out this great competition where all you need to do is correctly guess exactly when the music video for "Take On  Me" will reach 1 billion views on YouTube. Enter here!

Listen to a-ha on Spotify:

Listen to a-ha on Apple Music: