At just four hours and twenty five chapters in to the Audio version of Beastie Boys’ recently released Beastie Boys Book, I’ve laughed, cringed, nodded in agreement on several occasions and even shed a tear (and not for the phantom presence of late founding member Adam ‘MCA’ Yauch which looms dominantly through its 600 pages).

Due to the popularity of the book, ‘my guy’ aka Booktopia could not supply it on release and so after much rhymin’ and stealin’ my way in to the cheapest possible pre-order of said book I could get my hands on, I went to ‘my other guy’ aka Amazon for a quicker fix and then when they took too long to ship it, I opted for the instant-gratification and mainline hit of the Audible version.

I tell you this #coolstory because much of the book’s opening quarter revolves around the romanticism of the time before the internet. The Beastie Boys’ Adam Horowitz (The King Ad-Rock) and Michael ‘Mike D’ Diamond note they are flying desperately close to the ‘old man yells at cloud’ sun with this kind of sentiment but it all adds to this feeling of how luck, timing, connections, risk-taking and just a little bit of talent could make you one of the breakthrough music groups of the last century. The moments of luck like, when Horowitz accidentally hears his song being used on a British Airways TV commercial which eventually funds his first drum machine purchase (you know, the one also used for seminal Run DMC productions, too) are the kind of phenomena that would not be an issue in the internet age. Had it been missed, that TR-808 may have never been bought, The Beasties may have played a few more hardcore gigs and never developed into the Beasties we know and love today. 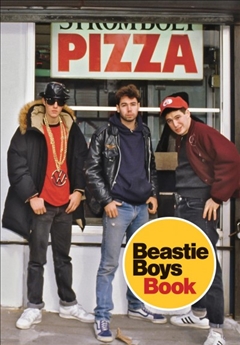 It’s also just a downright cool time and regular readers of ILYOS who’ve fawned over our recent David Byrne feature will know that New York in the late 70s and early 80s was responsible for the birth of much of modern culture. It’s like, no Debbie Harry, no Lady Gaga. Someone had to have the first Rap #1 single in 1981 and Blondie did it before anyone else and just like you wouldn’t expect, the Beastie Boys achieved the first #1 Rap album five years later. What the overarching theme of the book is, it was going to be done, they’re just the lucky punks who found themselves doing it.

Read more: Rap'n'Roll - How The Worlds Of Heaviness And Hip Hop Collided

In Horowitz’s prologue - a fitting tribute to MCA as the friend in your group who encourages you to ‘go big’ - the tone is set for soul searching (I have a feeling the ‘Cooky Puss’ mea culpa is going to be the first of many from a band whose debut album was originally going to be titled Don’t Be A Faggot) but it’s read with sincerity and genuine remorse. And the minutiae of the detail with which he and Diamond go in to really sets the scene for how these clever little fuckers just thought they were being hilarious and got away with it. At the height of their popularity, they became what they set out to make fun of.

There are tales so intricate in this book, it’s hard not to be swept up in the glamour of a city that was literally burning at this time. I’m not talking about getting rescued by Julian Schnabel from gangsters at a club or seeing Billy Idol and Don Letts at some Dub club that also played Hip Hop, I’m talking about the first and last meeting the guys ever had with Russell Simons, decades apart, or the story of the even longer timespan of friendship between Beastie Boys childhood friend, Rat Cage record store owner and man who would press the first Beastie Boys vinyl, Dave Parsons, is kind of breathtaking. You will never expect where that story goes, and if you’re not floored by it, return the book to your dealer and seek medical attention.

I’m glad I got the jump on my physical copy because the Audible version is read by some perennial faves of the cool school. Bobby Cannavale leaps over scene-sounds like they were hurdles on a high school running track, whilst Steve Buscemi is the perfect guy to discuss the dankness of downtown rehearsal spaces. Kim Gordon’s cool rasp brings things back to reality (it’s not all just boys patting themselves on the back wondering how they got here) and then there’s an incredible skit filled with ‘is that him’ voices regarding the ice-cream cake alien known as Cooky Puss. John Stewart comes across as the guy who may have grown up in a neighbouring suburb to these guys, admiring it all and now have a chance to live vicariously as some kind of fourth member.

I have a tonne more to read, as do you. But for God’s sake, buy it from a bricks and mortar bookstore unlike this Funky Monkey.