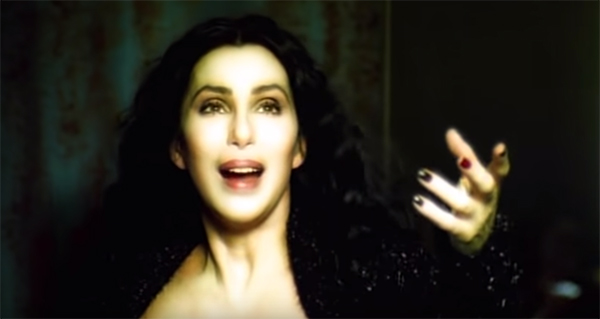 There’s no other career quite like Cher’s in the history of pop music, proving time and time again why she deserves the moniker, ‘Goddess of Pop’. This week marks twenty years since the diva extraordinaire set a new world record with her chart-topping anthem, “Believe”.

In March of 1999, at the age of 52, Cher became the oldest woman to ever top the Billboard charts with the single from her twenty-second record, also called Believe. The break-out hit transformed Cher from pop star to immortal; her transcendence marked by the track’s all-out dominance of pop radio, a medium that usually tends to be quite ageist. However, this is really just the tip of the iceberg when considering the lasting impact that “Believe” has had on music ever since. When it comes to production, Cher basically reinvented the wheel with this one.

The release kicked off a wildly successful renaissance for the star who first found fame back in the '60s as one half of the sugary husband-wife duo, Sonny & Cher. With a string of solo albums, tours, TV shows and feature films, Cher was never far from the spotlight but couldn't possibly have foreseen reaching the commercial peak of her career more than thirty years in. So, what makes the four-minute, trance-like dance anthem such a stand-out moment in an already action-packed career spanning five decades?

Few songs over time literally change the way music sounds going forward, and this was one of them. “Believe” brought the mythical and, at that time, new Auto-Tune plug-in out of the closet and exposed it in its full robotic glory. In a fitting homage to her bold and brave personality, Cher took a tool that most artist’s hide behind in secret and wore it like a badge of honour.

"Believe" took six songwriters over ten years create. Despite having a "great chorus", it was passed by most of the major female pop artists at the time. But Cher saw potential in the track and was driven by an urge to recreate a ‘telephone’ vocal effect she had heard on a TV show. Inspired by her vision, the producers started experimenting with the possibilities of Auto-Tune. It must have taken some Dutch-courage to show Cher, a notorious taker of no bullshit, her overly processed, synthetic sounding vocal track! Luckily, she was immediately convinced of the song's strength, saying, "Don't let anyone touch this track, or I'm going to rip your throat out."

And she had good reason to be protective. “Believe” reached number one in more than twenty-three countries and sold over 11 million copies worldwide. The pinnacle of Cher’s career came when the song was named as the best-selling recording of 1998 and 1999, respectively, in the UK and the U.S., earning her the Grammy Award for Best Dance Recording.

The signature pitch-perfect slide from one note to another on "Believe" became known as "the Cher effect”, and while purists may decry its pervasiveness as 'Auto-Tune abuse', love it or hate it, Cher is the clear winner on this one. As a woman whose career has seen many inflections, on top of being a fashion and pop culture icon, the breakout success of “Believe” introduced Cher to a whole new generation of fans and turned her an icon.

So, go on, get lost in “Believe”. With its relentless beat, soaring melody and hypnotic, repetitive lyric posing a universal question that none can escape - it’s a bona fide anthem of empowerment well worth celebrating.

Find "Believe" on our I Like: Cher playlist, stacked with decades worth of hits from the Goddess of Pop!

Listen to Cher on Apple Music