Neil Young's Worst Album Covers (And The Best Songs On Each Of Them!)

Neil Young's Worst Album Covers (And The Best Songs On Each Of Them!)

If it weren’t already the title of a best-selling anti-lifestyle book, The Subtle Art Of Not Giving A Fuck would be a great description for how Neil Young’s blazed his way through life. He’s been sued by his ‘80s label Geffen for making music “unrepresentative” of his oeuvre and habitually fallen out with his old bandmates Crosby, Stills and Nash, but you have to hand it to Neil for always forging his own distinct path. Having released more than 40 studio albums (both solo and with acts such as Buffalo Springfield, CSNY, Crazy Horse and Promise Of The Real), an arsenal of live albums and plenty of archival dispatches over the course of 50 years, there was always going to be a couple of dubious recordings in the mix. Likewise, Neil’s cover art has also included a fair few stinkers. While he’s often had a hand in the designs (his scrappy handwriting appears on classics such as Ragged Glory, Tonight’s The Night and Rust Never Sleeps), the results have sometimes appeared deliberately slapdash or wilfully mediocre. Thankfully, there are hidden Shakey gems even on the albums which look like they’ve been designed on a scrap of cardboard used to prop up a wobbly table. Here we navigate you through 10 of Neil’s dodgiest album covers… and the best songs on each of them. 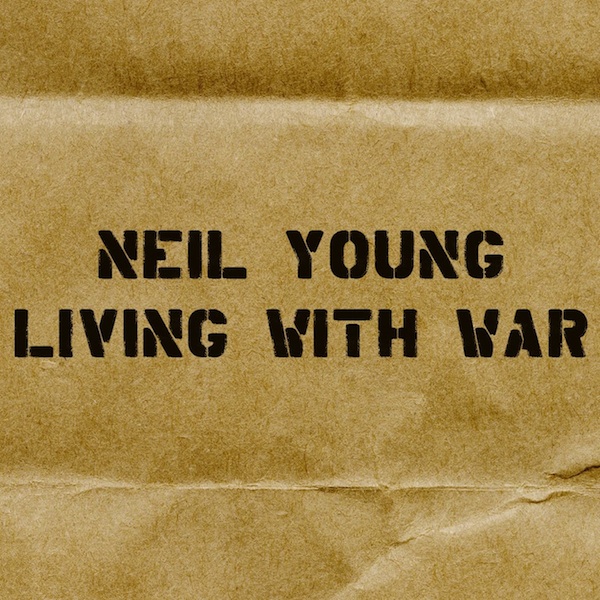 What The Cover Art Resembles: The discreet packaging of a company specialising in mail-order sex toys

Best Song On The Album: The era of George W Bush seems a long time ago now, but Living With War finds Young railing hard against the US President. "Shock And Awe" offers familiar elements; the inclusion of the line “We went with what we knew and now we can’t go back” at 3:39 cheekily hinting it’s about to morph into Neil’s ‘70s classic "Hey Hey, My My (Into The Black)". It’s a somewhat shambolic album, but still earned three Grammy nominations including Best Rock Album and Best Rock Song (for "Lookin’ For A Leader").

Fun Fact: Neil puts forward Barack Obama as the next US President in the lyrics to his track "Lookin’ For A Leader". Obama would be sworn in as US President three years later. 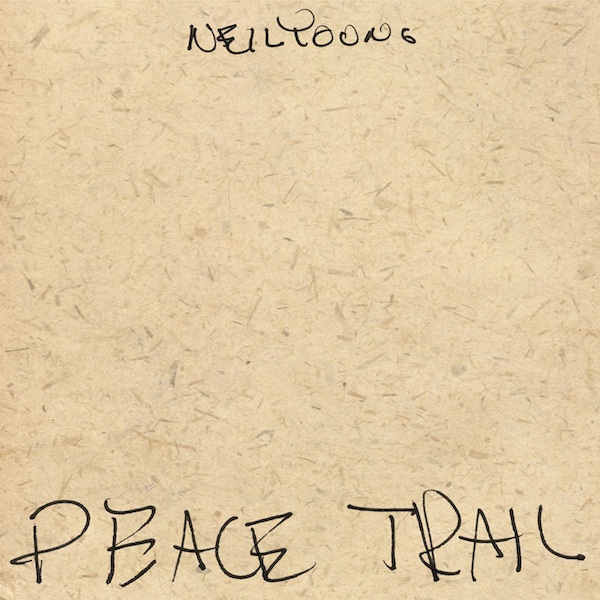 What The Cover Art Resembles: Chipboard graffiti in a Bunnings warehouse

Best Song On The Album: Peace Trail is a particularly hard Neil Young album to love, with acoustic elements punctuated by aggravating guitar squalls, blundering lyrics failing to cut through and Jim Keltner, one of rock’s most acclaimed session drummers, reduced to brusque, awkward rhythms. Even more absurdly, album closer "My Pledge"’s synthesised vocals suggest a throwback to Young’s unloved ‘80s album Trans (more on that one later). New inductees are best off sticking with "John Oaks", which sounds like an old folk tale that’s gradually evolved over many generations of recitation.

Fun Fact: Peace Trail was recorded at Rick Rubin’s Shangri-La Studios in Malibu in the space of a single week. Neil collaborated with upcoming hip hop star DRAM while recording at Rubin’s pad. 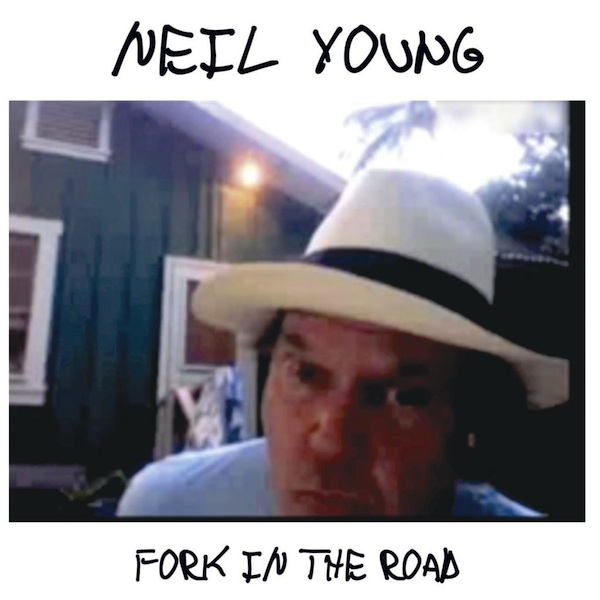 What The Cover Art Resembles: Grandad’s first attempt at FaceTime

Best Song On The Album: While The Beach Boys beat him to the first ever concept album about cars by more than 35 years, here Neil throws his hat in the ring with a record dedicated to his Lincoln Continental. At different ends of the spectrum, "Light A Candle" is a sweet acoustic addition to Young’s canon, while "Cough Up The Bucks" features crunchy guitar and the title chanted with hypnotic zeal. The album was nominated for Best Solo Rock Performance at the 2010 Grammys.

Fun Fact: Custom-engineered to run on alternative energy, Neil’s Lincoln Continental caused a million-dollar fire a year after the album was released. While plugged into a power supply, the car started a warehouse blaze that gutted the Lincoln and burnt many of Neil’s personal items. 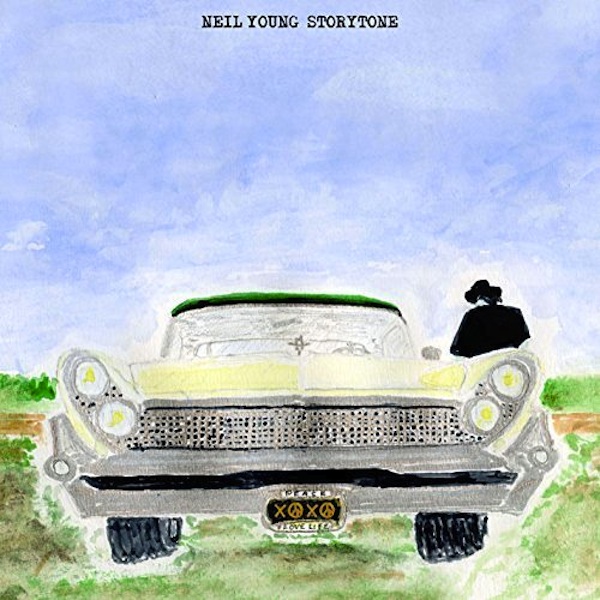 What The Cover Art Resembles: A 10-year-old’s pavement chalk drawing (it’s actually a watercolour by Neil)

Best Song On The Album: Plenty of Shakey fans love the abrasive sounds of Weld or Ragged Glory, but for those after something more symphonic and nostalgic, try a little Storytone. The lush, beautiful sounds of "Plastic Flowers" recall the vulnerability of "After The Gold Rush".

Fun Fact: If Neil’s sounding loved up, it’s because Storytone addresses Young’s fresh romance with Blade Runner actress Daryl Hannah after breaking up with Pegi Young, his wife of 36 years. 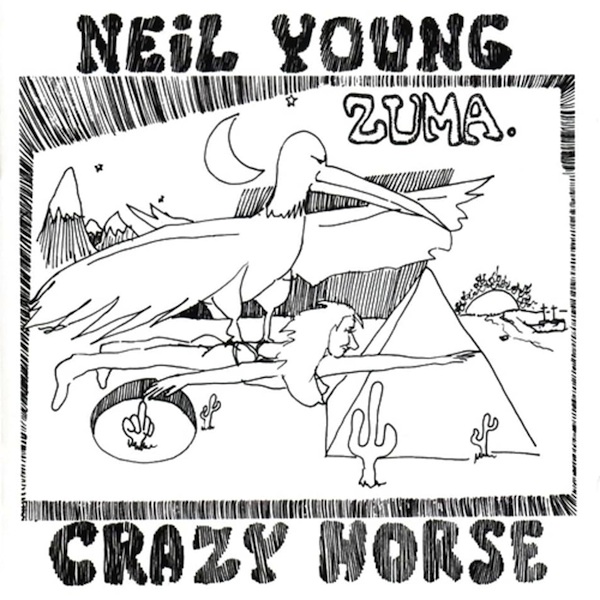 What The Cover Art Resembles: The peyote hallucinations of a breast fetishist

Best Song On The Album: Unlike James Mazzeo’s Zuma cover art, a quickly scribbled blueprint Neil instantly decided was perfect as the final artwork design, Zuma sounds like it has been expertly tailored by a master craftsman. A perennial favourite in the Young solo catalogue, "Cortez The Killer" is a formidable beast of a song whose vocals don’t arrive until 3:23.

Fun Fact: Crosby, Stills, Nash & Young were in the midst of their first reunion in four years at the time of Zuma’s recording, with all four members appearing on the track "Through My Sails". They had broken up again by the time of Zuma’s November 1974 release and wouldn’t perform live again until Live Aid in 1985. 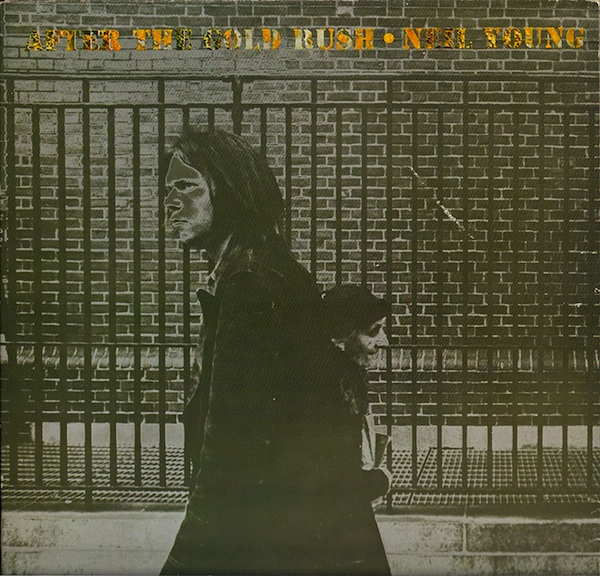 What The Cover Art Resembles: Neil’s kidnapped an old woman and strapped her to his back

Best Song On The Album: Given his penchant for making interesting cover art choices, Neil didn’t even pick out a photo that was in focus for After The Gold Rush – the photographer Joel Bernstein added the solarising effect to try and minimise the unclear nature of the shot. There are no such issues with the songs on After The Gold Rush being similarly hazy: it’s a constant fixture on perennial ‘greatest albums’ lists. Featuring stone cold classics including "After The Gold Rush", "Only Love Can Break Your Heart" and "Southern Man", it’s impossible to offer a highlight of these 11 songs. Best to listen to the whole thing - and regularly.

Fun Fact: The original cover photo actually featured Graham Nash on the right side of the shot, which was taken in New York City. 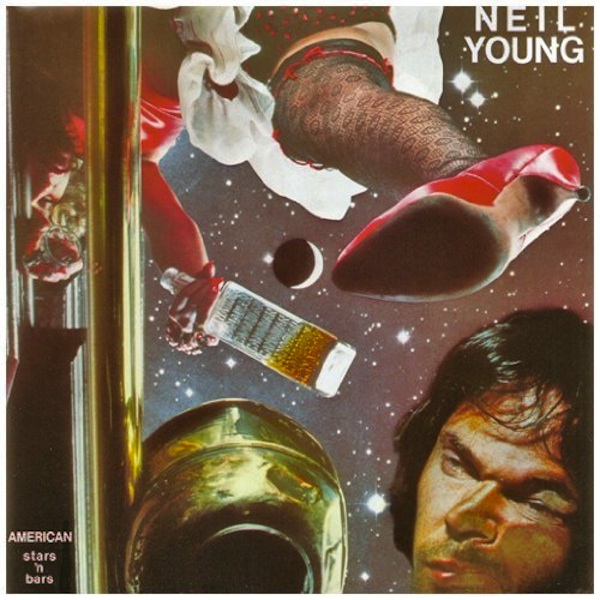 What The Cover Art Resembles: The mid-life crisis of an up-skirter

Best Song On The Album: Even casual fans will already be familiar with the kick-arse, "Runaway"-esque sounds of American Stars ‘N’ Bars’ standout song "Like A Hurricane", so may we suggest two alternatives instead: on "Bite The Bullet" you can hear Linda Ronstadt in her prime offering powerful backing vocals, while her Trio partner Emmylou Harris is on hand on the subsequent track "Star Of Bethlehem" to provide subtle harmonies.

Fun Fact: The cover was designed by actor Dean Stockwell, who appeared in Quantum Leap, Blue Velvet and Married To The Mob. 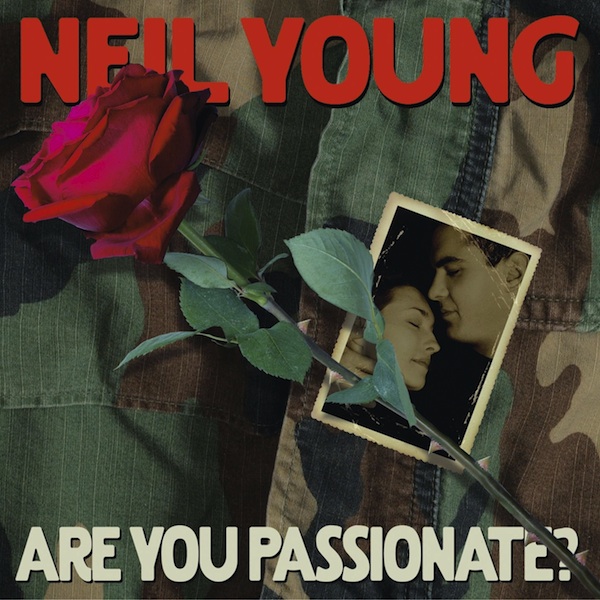 Best Song On The Album: With Booker T & The MG’s adding a warm soul vibe to many of the tracks, Are You Passionate? is a surprisingly taciturn release given elements of it were recorded in the wake of the September 11 attacks. The long running times of each song (only one comes in less than four-and-a-half minutes) provides time for Young and his Stax guests to really build their keyboard-based songs. Try the hymnal title track over the prospective jingoism of the best known track, "Let’s Roll".

Fun Fact: Despite being listed on some pressings of the CD cover, a studio version of "Gateway Of Love" remains officially unreleased. 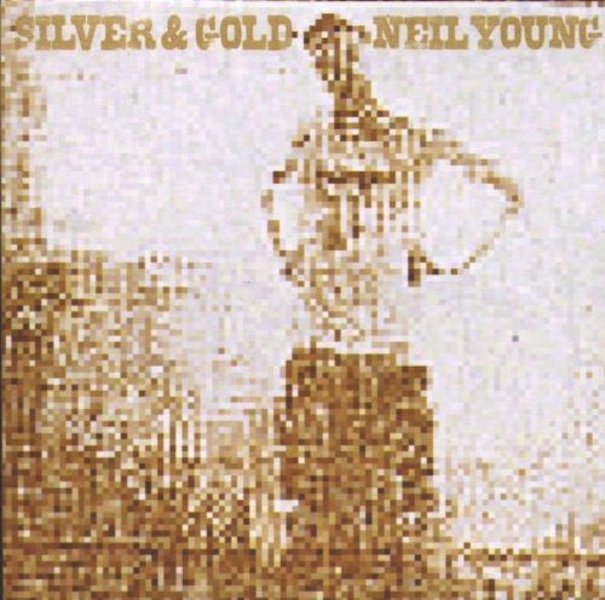 What The Cover Art Resembles: A monochromatic screen glitch from a 1989 Leisure Suit Larry computer game

Best Song On The Album: As the opening track "Good To See You" suggests, Silver & Gold greets you like an old friend. A reflective mood pervades on the album, with the highlight "Buffalo Springfield Again" written as an open letter to his old bandmates after Neil heard one of their ‘60s songs on the radio.

Fun Fact: The album cover art was a photograph taken by Neil’s 16-year-old daughter Amber on a Nintendo Gameboy. 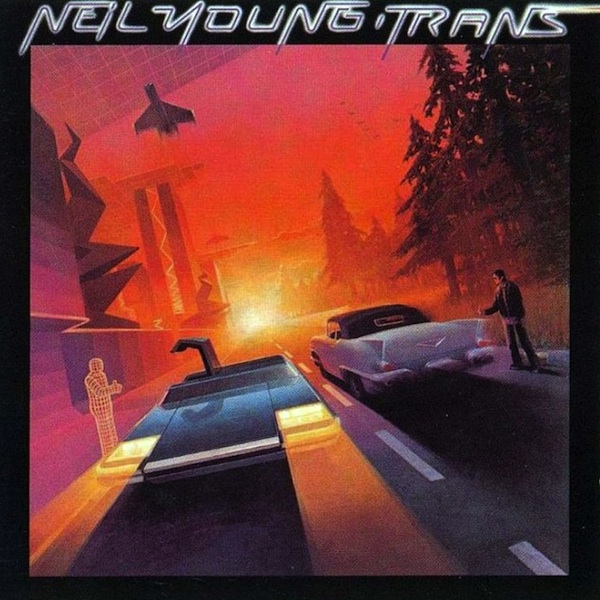 What The Cover Art Resembles: A Back To The Future movie poster from behind the Iron Curtain

Best Song On The Album: Wait, this is the same guy who sang "Heart Of Gold"?!? Trans famously baffled fans and critics upon release since it bore little resemblance to a Neil Young album, but that doesn’t mean it can’t be enjoyed. Sounding more like Giorgio Moroder working with The Cars, "Computer Age" is an incredibly interesting track that wouldn’t be out of place on Daft Punk’s Random Access Memories. Bursting with Synclavier and vocoder, the robotic elements have more in common with an episode of a Transformers cartoon than Harvest. It’s one of the most brilliantly mystifying moments of Young’s wide-reaching career.

Fun Fact: The album was created as part of therapy sessions with Neil’s son Ben, who was born with severe cerebral palsy and was non-verbal. The Bridge School, whose benefit gigs have featured everyone from David Bowie and Bruce Springsteen through to Thom Yorke and Soundgarden, was formed a few years later to help educate children with disabilities similar to Ben’s.

Listen to Neil Young on Spotify: