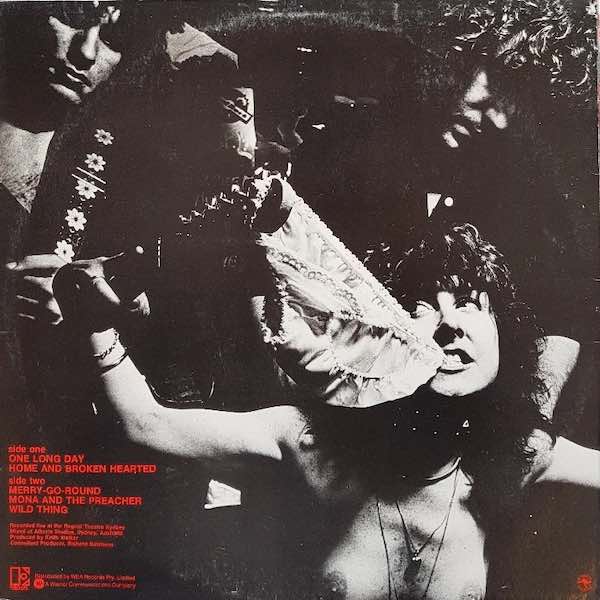 A popular 1978 EP from Cold Chisel released in the wake of their extraordinary self-titled debut album of the same year, this live five-tracker’s provocative title was perhaps less overt than the nude shot on its rear sleeve. The EP, which featured a cover of The Troggs’ hit "Wild Thing," included a photograph of a female associate of the band topless and with a pair of panties gripped between her teeth. With frontman Jimmy Barnes standing over the young lady and holding her left shoulder while she grips Ian Moss’ guitar neck, it’s the sort of questionable imagery unlikely to pass muster in 2021. 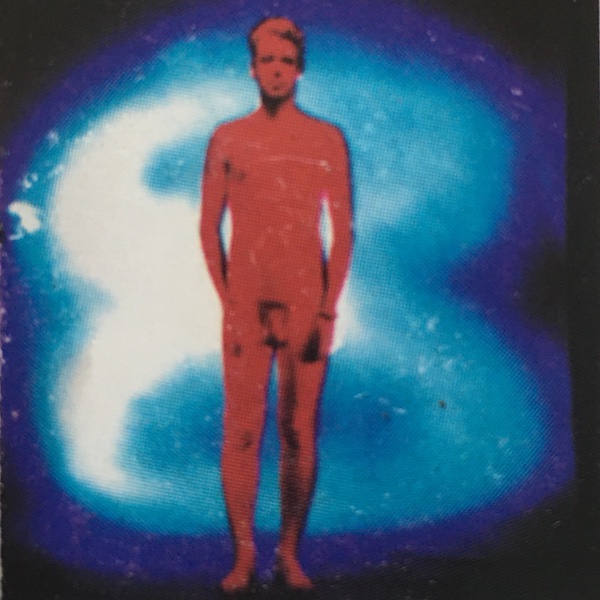 Dutch photographer Anton Corbijn, the man responsible for moody, iconic imagery for artists including Joy Division, Depeche Mode and Nick Cave, had been entrusted with U2’s cover artwork since 1984’s The Unforgettable Fire, but one of his cover ideas for the Dublin quartet never made it past the mock-up stages. As mentioned in the U2 documentary Achtung Baby: The Videos, The Cameos And A Whole Lot Of Interference From Zoo TV, an initial name proposed for 1991’s classic album Achtung Baby was Adam. To go with this title, which alluded to the Garden Of Eden and the Bible’s ‘Fall of man’, Corbijn shot some artistic nudes of U2 bassist Adam Clayton, with full frontal views of Clayton’s… err… ‘sweetest thing’. While the nude album cover never happened, one photograph from the shoot made it to Achtung Baby’s rear sleeve, although it was crossed out in some territories or concealed behind a cheap censorship bar shaped like a shamrock. 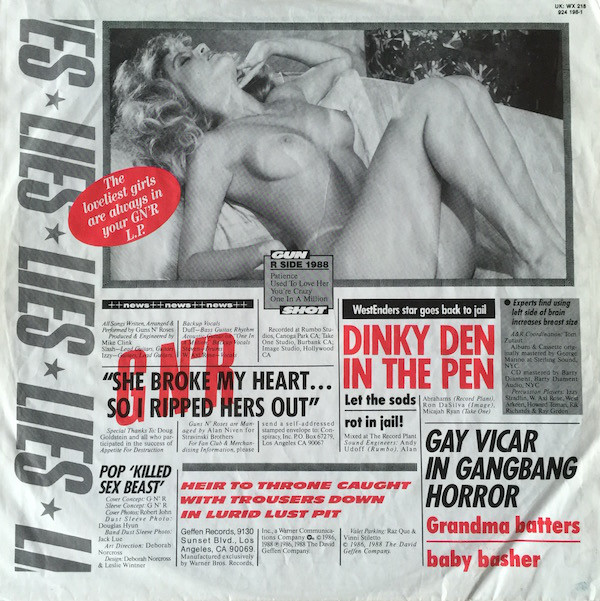 An amalgamation of live and acoustic tracks, Guns N’ Roses’ 1988 album Lies is these days better known for other controversies rather than its sleeve nudity. Back in the ‘80s though, certain countries baulked at including the album’s photograph of a beautiful nude blonde reclining on a couch beside the line ‘The loveliest girls are always in your GN’R LP’. These days the furore over a couple of breasts with tan lines pale in comparison to the record’s questionable references to domestic violence and racism, with the song "One In A Million" noticeably absent when the album was reissued as part of the extensive Appetite For Destruction box set in 2018. 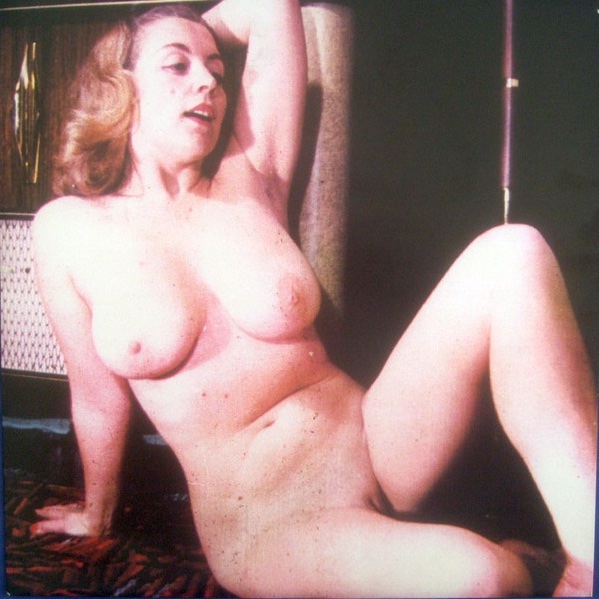 Rather than take the Hollywood pin-up route of Guns N’ Roses, for their inner sleeve, Manchester’s Happy Mondays opted for a tackier ‘reader’s wives’ style of nude in the artwork for their 1988 album Bummed. When asked whether he’d ever succumbed to the image’s sexual pull, frontman Shaun Ryder told Q Magazine: “I’ve not sure I’ve purposefully knocked one out over her. But somewhere in your mind, when you’re in a bunk bed on a fucking tour bus that’s going hundreds of miles cross-country, she might have entered into one of my quick wanks somewhere”. Too much information, Mr Ryder. 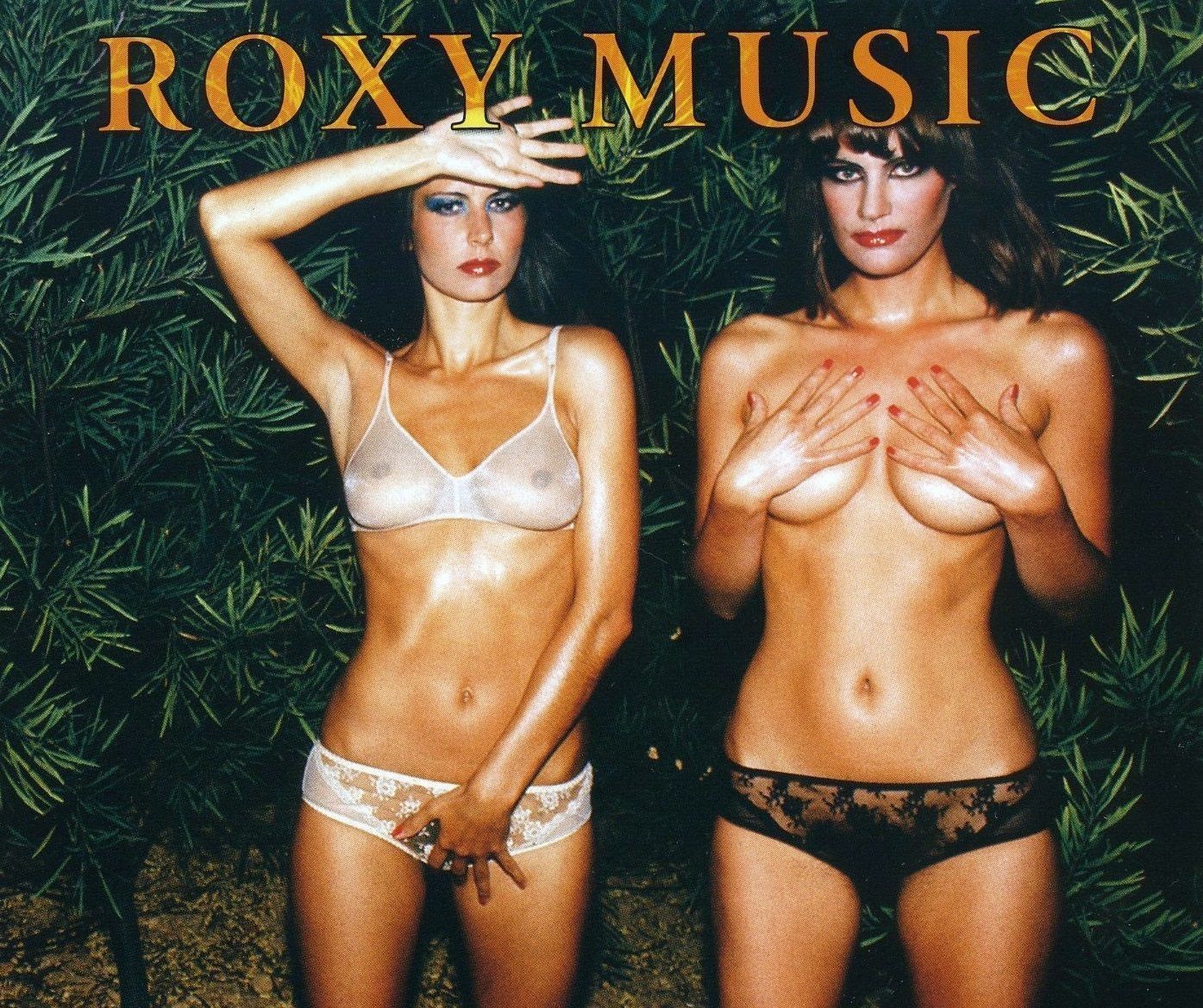 Proving the English can add a touch of class to a provocative photograph, Roxy Music’s 1974 album Country Life remains one of the sexiest album covers ever. The accidental cover stars were Constanze Karoli and Eveline Grunwald, two German friends who Roxy frontman Bryan Ferry met in Portugal. “We were in this bar in this tiny Portuguese town and in walked these two great Amazons,” Ferry recalled of bumping into the two Roxy fans. Since he had his friend, photographer Eric Boman, with him during the lyric-writing trip, Ferry had the cover shoot organised on the spot. Ferry suggested the scene was supposed to hint at an upper-class scandal: “I thought it would be interesting and glamorous.” The see-through nature of the women’s lingerie taunted censors in some countries, where the women were edited out to leave nothing but bush (well, the foliage behind the pair at least). Intriguingly, the girls also earned songwriting credits on the album as they assisted Ferry with German translations in the track "Bitter-Sweet". Karoli and Grunwald thereby made more money from being bilingual than getting their gear off: let that be a lesson to anyone considering starting an OnlyFans site rather than studying another language. 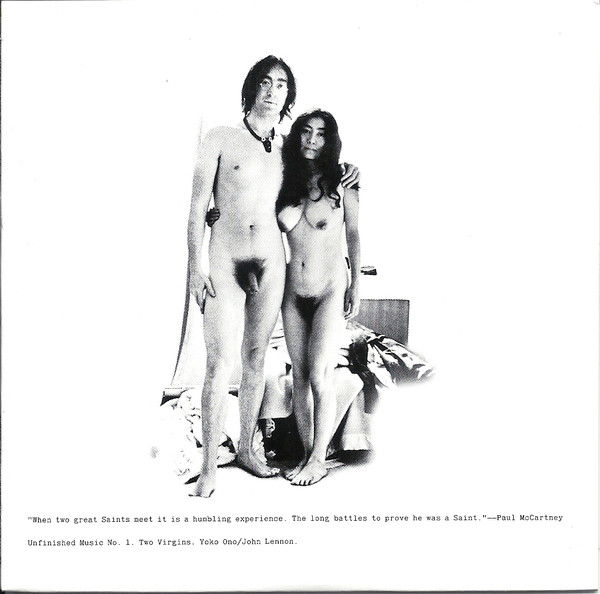 A shock to the 1960s fraternity who still thought the Moptops’ shoulder-length hair was a moral outrage, the cover to John Lennon and new squeeze Yoko Ono’s 1968 debut album collaboration Two Virgins was even more jarring than the avant-garde sound effects and weirdness on the vinyl itself. The sleeve image of the couple standing completely nude was part of a DIY photoshoot Lennon and Ono conducted before passing the film to an innocent Apple lackey to get developed. “We used the straightest, most unflattering picture just to show that we were human,” Lennon later said. “If we can make society accept these kinds of things without offence, without sniggering, then we shall be achieving our purpose.” As noted in the Beatles documentary Anthology, Beatles drummer Ringo Starr’s classic reaction to Lennon showing him the artwork was to point at the newspaper on the cover: “'Oh, you’ve even got The Times in it'… as if he didn’t have his dick hanging out.” 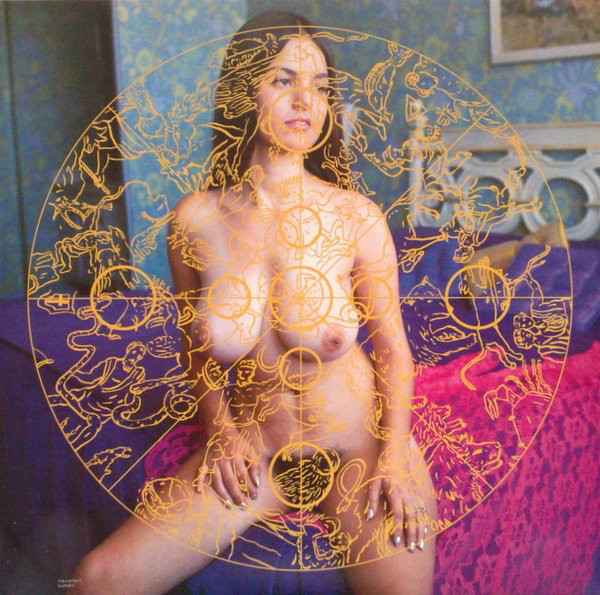 You might not know the band name, but you’ll know the guy behind the music: The Fireman is a Paul McCartney collaboration with producer Youth (the moniker being a reference to a character in McCartney’s song "Penny Lane"). Thirty years after his bandmate set tongues wagging by flopping out his old fella on Two Virgins, McCartney decided to splash some nudity across an album sleeve. Rather than personally getting his gear off, McCartney instead opted for a shot of a shapely young woman kneeling on a bed. The lack of liner notes in Rushes makes the provenance of the photo difficult to ascertain. While some McCartney sites propose it is a Bunny Yeager photograph from the ‘70s of a girl named Julie Lewis, there appears to be no further information available about a nude model of this name. Fans weren’t worried - a fold-out poster of the pin-up included in a 12” promo version of the album took up more of their attention. 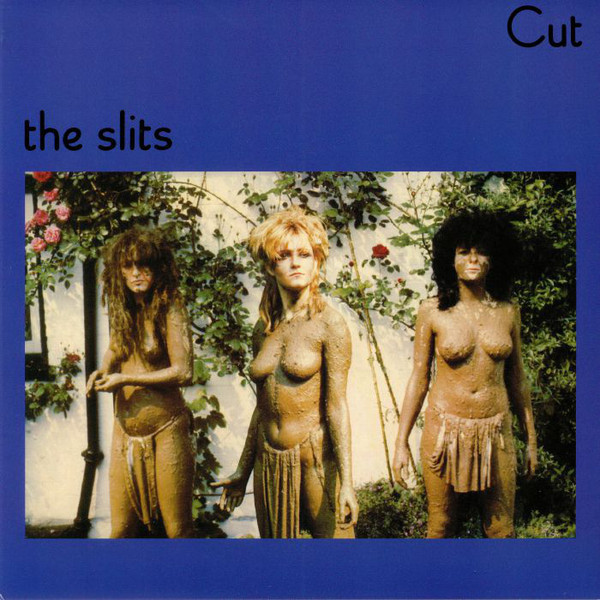 If the ‘70s punk movement was all about upending norms, provoking debate and inciting independent thought, there is arguably no album cover which better defines the era than The Slits’ 1979 debut Cut. A feminist manifesto in a single frame, the landmark cover captures three punk warriors posing in a proud and fierce stance – the fact they are topless could not be more inconsequential. Photographed by Pennie Smith at Ridge Farm Studios during their debut’s recording, the mud-covered members were vocalist Ari Up (just 17 at the time of Cut’s release), guitarist Viv Albertine and bassist Tessa Pollitt. Cut’s art was an emphatic and provocative Molotov aimed at the female objectification of album covers from the likes of Roxy Music. 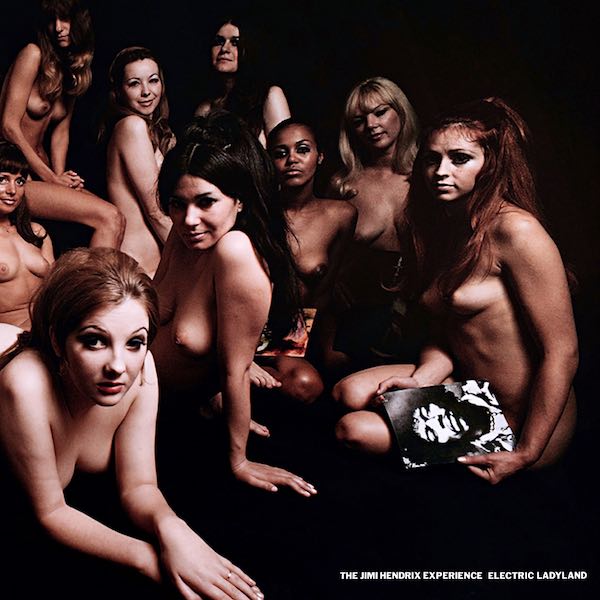 “I don’t like what they did with it at all,” Jimi Hendrix once proclaimed about the 1968 album Electric Ladyland’s cover, but it remains one of the guitar icon’s most iconic record sleeves some 50 years after his death. With the star not turning up for an artwork shoot, photographer David Montgomery instead went around to girls in London bars and asked who wanted to be on a Hendrix record cover. “The women were paid five pounds to go topless, but were reluctant to take off their pants,” Montgomery recalled in 2001, “So we paid them an extra two pounds to take their knickers off too.” Designed to be a “very natural looking” cross-section of sizes and shapes, Montgomery said, “we wanted to show people as they really were.” The cover was subsequently banned in some places, sold in plain paper bags in others and even issued with an alternate cover. 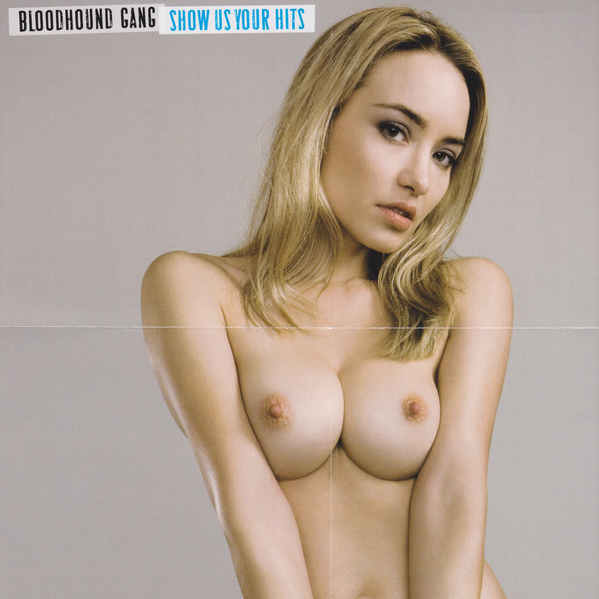 10. Bloodhound Gang – Show Us Your Hits 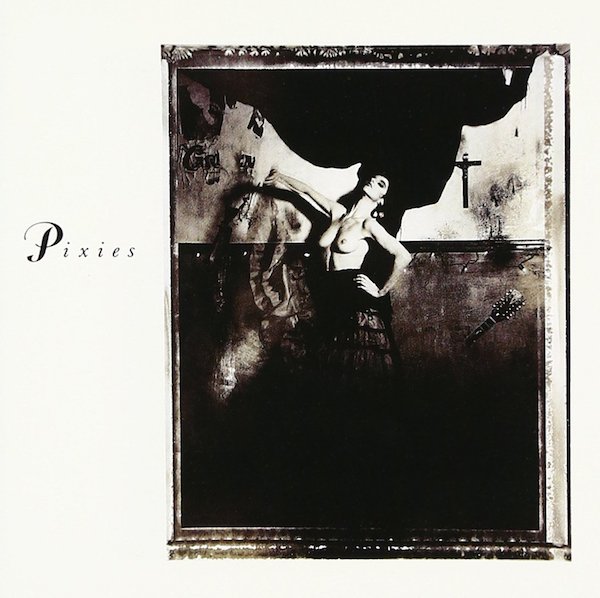 The source of their most streamed song, "Where Is My Mind?", Pixies’ 1988 album Surfer Rosa is home to an equally powerful cover. Despite its Latin air, the photograph was actually shot in a London pub called The Old East Hill rather than a Mexican cantina, with dancer Isabel Tamen holding a striking topless pose. With the Boston band putting their faith in 4AD designer Vaughan Oliver, it wasn’t until after it was completed that frontman Black Francis (AKA Frank Black) saw the sleeve. “I was presented with this very arty, surrealist semi-nude of this woman and I just thought it was great. There was no nasty vibe of sexploitation.” Speaking to this writer in 2014, Pixies drummer Dave Lovering recalled the powerfully sexy cover created quite a stir. “That image, we were all like, ‘Oh geez!’ - there was so much talk about [Isabel] back in the day! Everyone wanted to meet her and it was a big thing.” 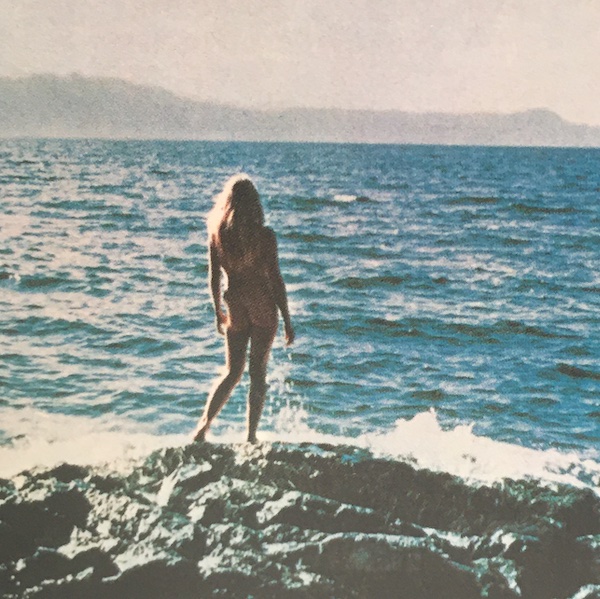 Forget Madonna – when it comes to chart-topping solo stars getting their gear off for album sleeves, Joni Mitchell beat the Material Girl by 20 years. Her 1972 album For The Roses’ cover art would have been a lot different if Mitchell had her way, with a naked arse shot her initially preference before manager Elliot Roberts stepped in. “It was the most innocent of nudes, kind of like a Botticelli pose,” Mitchell told Rolling Stone’s Cameron Crowe in 1979. "…Then Elliot said, 'Joan, how would you like to see $5.98 plastered across your ass?’” The offending photograph, which was shot by Joel Bernstein and reflected a lyric in album track "Lesson In Survival", was included in the inner sleeve of the record instead.

What are your favourites we’ve missed? Let us know on our Facebook page for potential inclusion in a NSFW! 12 Album Sleeves From Mainstream Artists Featuring Nudity - Part Two! And if you like this story, find our most popular NSFW story, 12 Music Videos Featuring Nudity, here.

Listen to Joni Mitchell on Spotify: