Like a dirty street version of Led Zeppelin, where JRR Tolkien-influenced lyrics were replaced by prostitutes and speedballs, Jane’s Addiction lifted the lid on LA’s dark underbelly in a post-Reagan, pre-grunge era. Despite 1988’s Nothing’s Shocking and 1990’s Ritual De Lo Habitual musing on pimps, serial killers and violent sex, frontman Perry Farrell doesn’t hear danger when he listens back to these early albums.

“It wasn’t like I was trying to make something dangerous up, we were just wild kids living in the streets at the time, so that’s what we sang about,” Farrell says. “It wasn’t a pose; I would go out, get with people, go to parties, go to clubs, meet people… it was just my life. I always felt the best songs were the authentic ones which came from real experiences.

“I look at it more like fun,” Farrell reflects. “There’s less danger and more fun. But danger can be a lot of fun, you know! Football is dangerous. Surfing is dangerous. People that surf and people who play football, I think they get into it because it’s so much damn fun.”

Farrell might be as baffled as anyone he’s survived 30 years dabbling in sex, drugs and rock’n’roll, but the new Jane’s Addiction 6LP box set Sterling Spoon goes some way in turning the focus back toward the band’s fiery musical legacy. Coupling Farrell’s howling with the sweeping riffs of Jane’s Addiction’s young guitar prodigy Dave Navarro, Nothing’s Shocking and Ritual De Lo Habitual were embraced by outcasts and alternative fans around the world. Not a bad outcome for a fast-talking former delivery boy born Peretz Bernstein.

“It was an accident how I got into entertainment,” Farrell says. “I was a guy who made liquor deliveries to clubs, so I was waiting at a Newport Beach nightclub for a van’s worth of liquor to be signed off. They were doing modelling shows there, so I was waiting for the woman who put the shows on to sign for the liquor. She saw me watching the show and asked me if I modelled. I said, ‘Oh yeah, I model, I sing, I dance, I act, I do it all!’ I basically lied, since I hadn’t done any of those things! She told me to come back Friday, so I started modelling. Modelling was a bore, so I went back to her and suggested I do impersonations of people to help the show along. I started doing Bowie, Mick Jagger and Frank Sinatra and it went over really well. Girls started lining up just to speak to me afterwards! I was very encouraged after that to take it serious, so that’s how I got into entertainment.”

After beginning his music career impersonating Bowie, it was mind-blowing for Farrell to later engage with his idol on a personal basis. Unfortunately, Farrell says their relationship soured after a couple of unfortunate events.

“David Bowie was beautiful and could sing like an angel,” Farrell says. “He was so creative and such an artist – what a unique person. He was so interesting – everything about him was interesting, but now he’s gone. I had a strange relationship with David Bowie. I met him at a show and then we had an online relationship that went south pretty badly. I was kinda younger and would contact him on the internet with all kinds of crazy stuff I wanted to run by him. Looking at it now I regret what happened. One time I lost my phone in the back of a limo and someone found I had David Bowie’s number on it. Someone found it and started calling him, going, ‘Hey bro! What’s up? What’s up, man?’ and saying it was me. That pissed him off. When I finally got back hold of him and told him it wasn’t me and it was just some stranger who had hold of the number, he was pissed off at me for that. Then another time I forgot to blind cc him on a very long email I was sending to try and help save this lake was being polluted in South America. It was one of those things where I was young and enthusiastic. He called me back and says, ‘Perry, you realise you just gave my email address out to 120 people?’ Wow, I kind of really messed it up with David Bowie.”

It’s not just Bowie’s death in January which has made Farrell consider his mortality this year. As a kid he was introduced to Muhammad Ali through his grandfather, who worked for sports accessories company Everlast.

“Yeah, a couple of my heroes have passed this year. Muhammad is an interesting story because he was the most beautiful, powerful man on Earth and he could knock anyone out if he wanted to. He was great looking and had a great sense of humour, but he was also kind and courageous, yet he spent half of his life barely able to communicate with people [due to multiple sclerosis]. It was probably a very humbling life to lead, considering once he could have had any girl he wanted and knock out any guy he wanted, then having to ask for help. Muhammad was one I look at that makes me reflect on my own mortality. I look at those guys and it makes you realise you’ve gotta try your hardest and not take things for granted.”

Not only does Sterling Spoon celebrate Jane Addiction’s recording legacy, the box also marks 25 years since Farrell launched his brainchild Lollapalooza. A travelling ensemble bringing together various musical genres and entertaining quirks, Lollapalooza became the blueprint for Australia’s own Big Day Out festival. Given the 1991 shows saw Jane’s Addiction performing the Sly & The Family Stone song “Don’t Call Me Nigger, Whitey” with fellow Lollapalooza act Ice T, Farrell must be the only white guy in the world who’s ever shouted ‘nigger’ in Ice T’s face and not had his head punched in.

“Well when I first met Ice, he said, ‘I like you, you’re a playa!’. I’d see him in the mornings on the Lollapalooza tour and he’d say to me, ‘Yo, what’s happenin’, playa?’. He wasn’t as ominous as you’d expect – he was a really good guy and a businessman, but he also grew up on the streets and he did what he had to do to survive. Those stories are real, so when you come up on them you gotta know who you’re talking to.”

The LA streets which birthed both Ice T and Jane’s Addiction are indirectly referenced in Sterling Spoon’s dazzling cover art, with the pupils of Ernesto Yerena’s colourful skull forming the shape of California. Despite being born in New York and spending childhood years in Florida, Farrell sees California as integral part of his – and Jane’s Addiction’s - story.

“I absolutely feel that Jane’s Addiction’s strongest association is with Los Angeles. That’s where all the songs were written and those stories are all coming out of living in LA. The beginning [Spanish] words of Cindyana [Santangelo] on Nothing’s Shocking: “Ladies and gentlemen, we have more control over your children than you do. But we love them. Bred and spread in Los Angeles, California, Juana’s Adicción!” That’s the opening of Nothing’s Shocking and Dave Navarro is also a Mexican musician. The lifestyle, the music, the surfing – everything we spoke about was very California.”

Despite their Californian heart, these songs transcended geography and connected with fans from Berlin to Brasilia, Montreal to Melbourne. Farrell sounds unsurprised his songs such as “Been Caught Stealing”, “Mountain Song” or “Ain’t No Right” found a global audience.

“The one thing that’s unifying is love. When you sing about love, when a man is singing to a woman how much he loves her and how beautiful she is, that transcends any place in the world. When you talk about the sorrow, sadness, victories and majesty of being in the moment, the glory of life and love, we were in Los Angeles but what I wrote about could touch any man or woman’s hearts. A lot of people said to me, ‘You got me through high school!’ or ‘You got me through college!’. What I wrote, I was able to relate to them by being an oddball, not exactly fitting in, being different and living a wild life. Having an outrageous evening and living to tell the tale. Those are the things I wrote about, but they’re universal.”

Jane’s Addiction performances in the 1980s were messy affairs that would sometimes culminate in Farrell stripping naked and provoking his audience, but the 57-year-old has long since scaled back on the outlandish behaviour in favour of live professionalism. In light of this month’s Jane’s Addiction nomination for the Rock And Roll Hall Of Fame, Farrell even lets slip the band’s management have reached out to estranged bassist Eric Avery about reuniting with the group (“We’re getting back in touch with him to see if he wants to join us,” Farrell says. “It would be great.”). While the deranged nude performances might be a distant memory, Farrell wears the aches from years of visceral live shows as a badge of honour.

“Well, listen man, don’t think I don’t wake up limping or with a sore throat, but that’s my life and I love my life. It’s just wear and tear from performance: I’ve torn my meniscus, got three hernias from singing and gosh, I live with a sore throat, but I wouldn’t have it any other way. It’s from singing and dancing hard, which is just the way I do it. I think people really dig the delivery and they love the performance, so I’ll keep going until somebody knocks me out.” 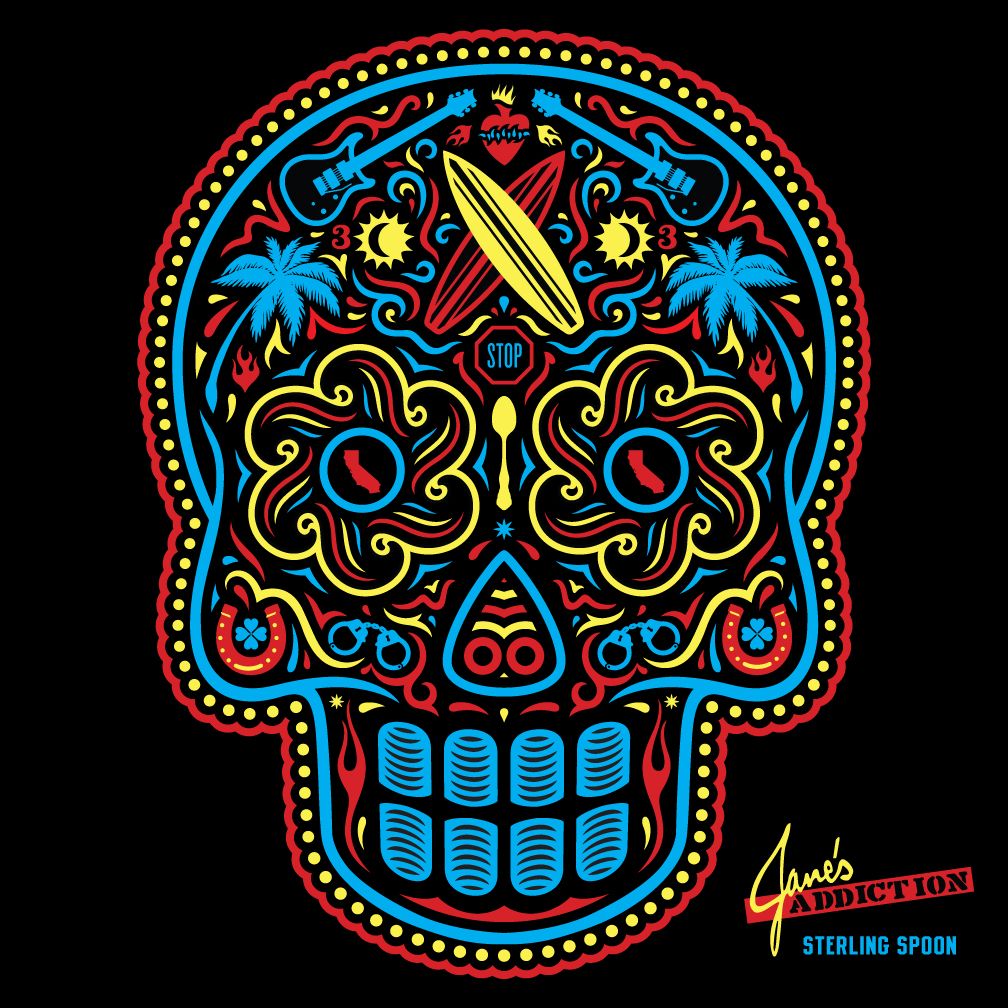