The 70s was the golden age of Australian rock press, as it was in both the UK and US. Here, early in the decade, we had Philip Frazer's Go-Set, which had started in 1966 and continued until 1974, along with Michael Gudinski & Michael Browning's Daily Planet/Planet, and then the Australian edition of Rolling Stone. Anthony O'Grady's RAM shook things up when it started in Sydney in 1975, followed by Melbourne's Juke a year or so later. With the advent of punk, we had some great fanzines starting in 1977, like Bruce Milne & Clinton Walker's Pulp, and Ian Hartley's Spurt.

1978 saw the birth of a new magazine in Adelaide that grew from punk roots and Adelaide-only circulation to become an influential presence on the national scene by the end of the decade. Founded by Donald Robertson and Stuart Coupe out of the ashes of their one-shot punk 'zine Street Fever - and continued by Robertson after RAM poached Coupe - Roadrunner helped foster a new generation of writers (including the likes of Milne and Walker, who threw their lot in with the Adelaide crew). It was a new voice; the only widely available Australian publication of its time that covered things from a consistently post-punk perspective. Which is not to say that other music wasn't covered – more mainstream but "new" Oz rockers like the Angels, Chisel et al. were well covered, and Adelaide locals Redgum were favourites, typifying something of the leftover hippy approach – not punk but definitely left-leaning - that was also still felt at Double J and community radio at the time, and still part of the youth mix.

Roadrunner is the subject of a deluxe new book assembled and published by its old publisher Donald Robertson. Taking its name from a song by Adelaide's Young Modern – whose rise on the local scene and move to Sydney (where they joined Chisel and the Angels at the happening Dirty Pool agency) anticipated Roadrunner's growth, the book shines a light on the era and tells the story of the magazine, including how its move to Sydney was on the back of a lifeline handed it by Lobby Loyde, who was then managing the Sunnyboys. Most importantly, the book features original feature stories from the magazine's half-decade run, and focuses primarily on its Australian artist coverage. Weighing in with 544 pages with colour throughout – it's a 210mm x 297mm case-bound hardback – The Big Beat: Rock Music in Australia 1978-83, Through the Pages of Roadrunner Magazine, is as comprehensive coverage of the post-punk era in Australia as you will find. 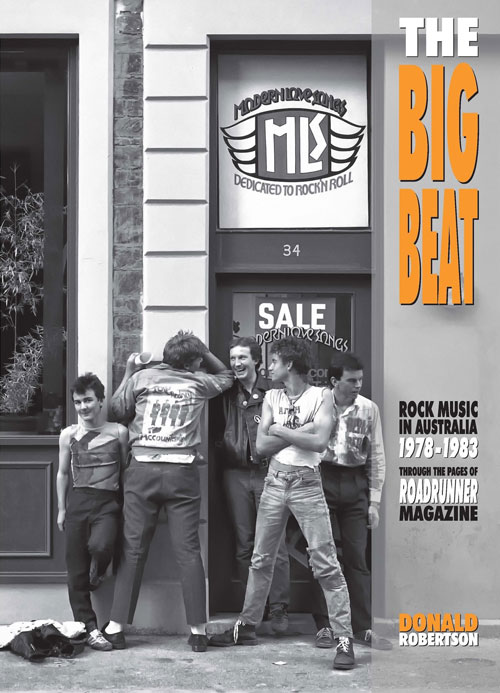 Artists featured in the book include The Angels, Australian Crawl, Boys Next Door (and The Birthday Party), The Church, Cold Chisel, The Dagoes, Flowers (and Icehouse), The Go-Betweens, The High Rise Bombers, The Hitmen, Hunters and Collectors, INXS, Jo Jo Zep and the Falcons, Paul Kelly and the Dots, Laughing Clowns, Manikins, Mental as Anything, Midnight Oil, Mi-Sex, Models, Mondo Rock, The Moodists, New Race, No Fixed Address, The Numbers, Pel Mel, The Radiators, Radio Birdman, Redgum, The Reels, The Riptides, The Saints, Sardine v, The Scientists, Skyhooks, Split Enz, The Sports, Stiletto, Sunnyboys, The Swingers, Tactics, Terminal Twist, The Thought Criminals, The Triffids, Two Way Garden, The U-Bombs, Voigt/465, Dave Warner's From the Suburbs, Whirlywirld, XL Capris, and of course Young Modern. The handful of international artists featured include John Lydon (by Keith Shadwick), Bob Marley (by Tom Zelinka), Brian Johnstone's Stranglers piece and Stuart Coupe's legendary Bruce Springsteen piece circa The River, written on the back of a record company junket to Paris to interview the Boss and see him perform; a junket that was a major coup for both Coupe and the fledgling magazine.

Crank up the book's title track, "The Big Beat" by Young Modern, as Donald explains how it all came about.

What inspired you to start Roadrunner? Had you written before? You obviously had a burning desire to write about music.

Roadrunner grew out of a little punk fanzine (Street Fever) that Stuart Coupe and I put together in December 1977, with the help of the crew that hung around Modern Love Songs. MLS was Adelaide’s go-to import record shop for all things punk and new wave, including the fanzines like Sniffin’ Glue that had sprung up in the UK. I’d just returned to Adelaide after two and a half years in the UK, wherein the punk scene the prevailing ethos was ‘do it yourself’ – form a band, design a poster, write a review, publish a fanzine. Coupe and I enjoyed the fanzine exercise but didn’t sell many copies, so over the summer persuaded some mates to join us and approached Chris Plimmer who ran Adelaide’s dominant booking agency Sphere with the idea of doing a music paper for Adelaide. Chris was enthusiastic and agreed to sell advertising for the magazine and enlist the support of Adelaide’s small but perfected formed music industry.

I had written one piece while I was in the UK – an interview with Tim Finn and Noel Crombie of Split Enz. I sent it to Nation Review back here in Australia, but it wasn’t published. But I devoured the UK rock press when I was there. Every Thursday, NME, Melody Maker, Sounds, I read them all on my commute on the train from Bath to Newport, South Wales. That’s where you found about new music. With the exception of John Peel, it wasn’t on the radio or on the telly. And the new music was very exciting. When I came back to Adelaide I felt a bit like a missionary – I had to spread the good word about it!

Was it difficult to do the magazine from Adelaide once you went national? What was it about Adelaide anyway? Cold Chisel, the Angels, Paul Kelly, not forgetting our mutual favourite Young Modern, going back a few years earlier the Masters Apprentices, Fraternity with Bon Scott etc.

I think in many ways, Adelaide was the ideal place to incubate the magazine. It was only available in South Australia for its first year (1978) and in that time the bunch of enthusiastic amateurs that started it was gradually joined by a more professional crew who were interested in its possibilities. Adelaide was a cheap place to live and production costs for the magazine were cheap. But that was offset by the distribution costs of doing a national magazine out of Adelaide.

From Adelaide you got a balanced perspective on the Sydney and Melbourne scenes. The interstate bands that came through to play had to have reached a certain level of prominence for a South Australian promoter to take the risk of bringing them over. So you tended to get the cream of the crop.

In terms of the local scene, the Angels, Cold Chisel, Stars and Paul Kelly had all left town by the time Roadrunner arrived. Poet Richard Tipping once said artists in Adelaide are like grasshoppers in a shoebox. Sometimes the lid comes off and a few get out. It’s a great place to get your act together but very difficult to sustain a career. The shining light on the local scene in 1978 was Young Modern. They were absolutely in tune what was happening in the UK and US new wave, but made the misstep of moving to Sydney where they were mown down by the howls of beer barn rowdies to ‘play faster’.

I was talking to Mark Ferrie of the Models etc. about the punk era a couple of years ago, and he mentioned how there was a lot of interesting music that was instantly killed off when punk happened. Obviously punk saw the creation of a lot of exciting music, but do you agree with Mark that the baby was thrown out with the bathwater at the time?

I don’t exactly know what Mark was referring to, but for me what punk did was disrupt the corporate music business sufficiently for new, interesting and creative things to bloom and grow. Independent singles, bands putting on their own gigs, community radio stations, magazines like Roadrunner. Those things gave the opportunity for groups playing very different music to emerge and thrive, if only briefly in some cases. I’m thinking of bands like Voight/465 and Pel Mel in Sydney, Whirlywirld and Hunters and Collectors in Melbourne, the Go-Betweens in Brisbane and Nuvo Bloc and Systems Go in Adelaide (and there were many more).

Do you have any thoughts in regards to how the local scene developed as the 80s went on?

The final issue of Roadrunner came out in January 1983, and it was my attempt to make the transition to a colour glossy magazine, akin to UK mags like Smash Hits and The Face. To me the torch of music journalism had passed from the ‘inkies’ like NME and Sounds to these newcomers who had their fingers on the flash and style of the New Romantic movement. That final issue of Roadrunner was in many ways the prototype for what I did as editor of Countdown magazine. Built around the as that money couldn’t buy – the monthly endorsement on the TV show by Ian ‘Molly’ Meldrum - by the end of 1983 Countdown magazine was selling 100,000 copies a month and had been purchased by Fairfax Magazines.

Many of the pub rock bands adapted to the new environment and flourished (INXS, Models, Hoodoo Gurus), some didn’t and faded away (Cold Chisel, Sunnyboys) and new talent emerged (Do-Re-Mi, I’m Talking, Kids in the Kitchen, Pseudo Echo). And yes, some of them had haircuts.

By the time my decade as a rock journo ended in 1988, I guess the thrill, the excitement had really waned for me. Not wanting to end up an eternal teenager, like the redoubtable Molly, I got a straight job, married my beautiful wife, had a gorgeous son, coached his soccer team and forgot all about rock’n’roll. No, that last bit’s not true. Because here I am, 40 years on, repackaging the memories of what are still to me the glory days of Australian music and finding a lot of people are ready, willing and really happy to jump into that time capsule.

Could you name your 10 favourite Australian bands from the Roadrunner era, and your favourite songs (can be multiple) by each of them?

Melbourne readers should note that The Big Beat is being launched this Friday, October 25, at Readings in Ackland St, St Kilda, with a panel comprising Phill Calvert (ex-Boys Next Door/The Birthday Party), John Dowler (Young Modern) and Donald Robertson. Moderator will be Pierre Sutcliffe (ex-Models). Signed copies of the book will be available for purchase on the night. Event details here.