1. In 1968, frontman Jim Morrison was asked by New York Magazine how he prepared for stardom. “I stopped getting haircuts,” he answered.

2. The Doors’ self-titled album was recorded in six days from start to finish.

3. Hairstylist, Jay Sebring gave Jim Morrison his famed ‘Alexander The Great’ haircut in 1967. He was shot dead by Charles Manson’s acolytes in 1969 at the home of his friend, actress Sharon Tate.

4. Keyboardist Ray Manzarek’s surname was actually spelt Manczarek, but he amended the Polish name after the formation of The Doors.

5. Record label executive, Jac Holzman signed The Doors to Elektra after Love’s Arthur Lee tipped him off about the up-and-coming Californians playing at the popular club Whisky A Go-Go.

6. After hearing Morrison perform his songs a cappella for the first time, an awed Manzarek told his friend “we’re gonna make a million dollars.”

7. Jim Morrison had an affair with The Velvet Underground’s German vocalist Nico. Andy Warhol wanted to film them having sex for his film, Fuck. Jim turned him down with a ‘Fuck off, Andy’.

8. After the 1970 death of his former lover Janis Joplin, Morrison would tell bar buddies “You’re drinking with the next one.”

9. Due to Morrison’s early shyness, Ray Manzarek sang most songs at the earliest Doors gigs.

10. While recording the first album, Morrison is said to have exclaimed “We don’t have enough original songs”. Guitarist Robby Krieger turned up with Light My Fire the next day.

The Doors | 'Light My Fire'

12. Playing the Fillmore in 1967, Morrison expertly knocked down famous San Francisco promoter Bill Graham with a mic he had been swinging wildly.

13. Still a few years away from the heights of his ‘70s fame, Alice Cooper was a Jim Morrison drinking buddy during 1968.

14. No One Here Gets Out Alive, an early biography of The Doors, stated Errol Flynn’s daughter, Rory was a Doors groupie during their 1966 house band stint at the Whisky A Go-Go.

15. Morrison’s father, Steve Morrison was an elite US fighter pilot in WWII. Steve earned a Bronze Star in the Korean War for ‘heroic achievement’ in a combat zone.

16. When Ray Manzarek first met Jim while studying film at UCLA, the future rock god was described as an overweight outcast.

17. An advertisement for The Doors’ self-titled album was the first rock billboard erected on Sunset Strip.

18. Morrison was a nervous child who wet the bed. It has been reported his mother would force him to sleep in the wet sheets as punishment.

19. During their 1968 European tour, The Doors performed their Amsterdam show without their frontman, who was obliterated on local substances. The crowd were said to have barely registered the absence.

20. When Hello I Love You became a hit for The Doors in 1968, Ray Davies’ publishers went after the band for ripping off The Kinks’ 1965 hit All Day And All Of The Night. “My publisher wanted to sue,” Davies later told Rolling Stone. “I was unwilling to do that. I think they cut a deal somewhere.”

21. Despite being employed by the Whisky A Go-Go in 1967 as the house band, not even the Whisky’s founder Elmer Valentine was spared in Morrison’s routine verbal tirades. Morrison would scream “Fuck you, Elmer!” from the stage during his binges.

22. Morrison went to George Washington High School with Ellen Cohen, who would later find fame as Mama Cass Elliot in The Mamas & The Papas.

23. The last time Jim Morrison ever saw his mother was at The Doors’ performance at the Washington Hilton in 1967. Seated in the front row, Morrison fixed his eyes on her during the climactic “Mother, I want to fuck you” line in The End, then never spoke to her again.

24. Morrison’s first mugshot was taken when he was arrested for public drunkenness at a football game in Tallahassee, Florida in September 1963.

25. After their first album was released, The Doors were offered a lucrative deal with Buick to use Light My Fire in a commercial. While the rest of the band had approved the offer, Morrison flew into a rage when told of the plan to change the lyric to “Come on Buick, light my fire.” The deal was cancelled at the last minute.

27. In the band’s first bio for Elektra, Morrison (incorrectly) stated his parents were both dead.

28. Drummer John Densmore and Ray Manzarek first met at Maharishi Mahesh Yogi’s transcendental meditation class in Santa Monica. The Maharishi would later gain pop culture infamy when The Beatles travelled to India to study with him in 1968.

29. Sharing a surname and a stage, Morrison sang Gloria with Van Morrison during Them’s Whisky A Go-Go gig in 1966.

30. Ray Manzarek considered the perfect joints Morrison rolled during their UCLA years to be “works of art”.

31. Two jams developed during The Doors’ regular slot at the dive bar London Fog in 1966 – Latin Shit #1 and Latin Shit #2 - would respectively evolve into Light My Fire and "Break On Through.

The Doors | 'Break on Through (To The Other Side)'

32. Before forming The Doors, a drunk Jim gatecrashed a set by Manzarek’s 1965 band Rick & The Ravens and sang a shambling version of Louie Louie with them.

33. A lifelong fan of taunting behaviour, Morrison was kicked out of cubs for mocking his scout leader.

34. Morrison had originally asked for his name to be billed as James Phoenix on The Doors’ second album so his father’s military career wasn’t affected. He was talked out of it before the album artwork went to print.

35. The Doors were photographed by Linda Eastman before she became Mrs Paul McCartney. Morrison spent the night with her. “She exhausted me,” Jim said of the blonde photographer. “We were like upside down and sideways.” 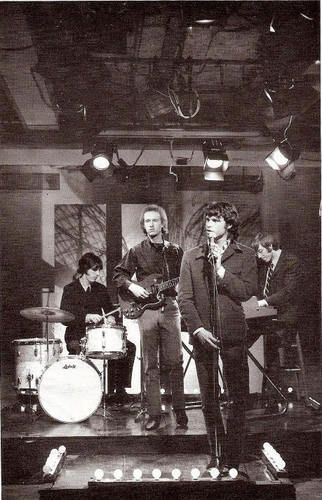 36. After trying to force her face into his lap at a party, Janis Joplin broke a bottle of Southern Comfort over Morrison’s head.

37. The Doors were eventually fired from their regular slot at the Whisky A Go-Go due to the offensive Oedipal lyrical finale to The End.

39. After failing to get a job in film after completing studies at UCLA, Morrison was so poverty-stricken he was forced to sleep on a friend’s roof.

40. When Lou Reed – who also went out with Morrison’s one-time paramour Nico – was told of Morrison’s 1971 death in Paris, he was said to exclaim: “He died in a bathtub? How fabulous.”

41. An early fan of the band, Paul Newman had been interested in the band writing a theme tune for Cool Hand Luke.

42. During their Winterland Ballroom show in San Francisco in 1967, the band stopped the set to watch their pre-recorded Jonathan Winters TV show appearance on a television set up beside the stage.

43. Elektra head Jac Holzman offered each of The Doors a gift when Light My Fire went to number one. John Densmore was given a thoroughbred horse.

44. On Long Island in April 1968, Jim drank 26 vodkas and orange between 4pm and 8pm. He attempted to get up and sing during Jimi Hendrix’s set, but was (unsurprisingly) too drunk to stand.

46. Jim and Grace Slick had a sexual escapade involving strawberries during a European tour featuring The Doors and Jefferson Airplane.

47. Morrison, intent on provocation, notched up numerous acts of public urination during his UCLA years. He pissed in the university library, on the carpet at house parties and in school lockers.

48. A lamb was brought onstage at a Florida show to promote vegetarianism, but Morrison undermined the message by rating, “I’d fuck her but she’s too young.” He then incited the audience to get naked – thousands took him up on his offer. Rolling Stone’s review of the show was headlined “Jim’s Organ Recital”.

49. Michu Meszaros, the small man on the ˆ album cover, also worked as ALF in the 1980s and as a stunt baby in Look Who’s Talking.

50. Steve Morrison became youngest admiral in US Navy at 47 years of age, just as his son’s breakthrough hit Light My Fire sat at number one in the chart.

The Doors found their mojo (and Mr. Mojo Risin’) in November 1970 as they recorded L.A. Woman over six days at the Workshop, the band’s rehearsal space on Santa Monica Boulevard. A success both critically and commercially, the album was certified double-platinum and contains some of the band’s most enduring music, including the Top 20 hit Love Her Madly, Riders On The Storm, and the title-track.

To commemorate the album’s 50-year anniversary, a 3-CD/1-LP set twas released in December last year. L.A. WOMAN: 50TH ANNIVERSARY DELUXE EDITION includes the original album newly remastered by The Doors’ longtime engineer and mixer Bruce Botnick, two bonus discs of unreleased studio outtakes, and the stereo mix of the original album on 180-gram virgin vinyl. Included is a previously unheard original demo of Riders On The Storm from the early recording sessions for the album which was discovered on an unmarked tape reel in the band’s vault, having been assumed lost for decades. The new expanded collection also includes, along with the album,  has been expanded with more than two hours of unreleased recordings, allowing the listener to experience the progression of each song as it developed in the studio. The outtakes capture Jim Morrison, John Densmore, Robby Krieger, and Ray Manzarek working in the studio. Get L.A. Woman (50th Anniversary Deluxe Edition), here.

Engineer and mixer, Bruce Botnick said: “The previously unreleased reels here – serial takes of The Changeling, Love Her Madly, Riders On The Storm, and L.A. Woman – depict a band obsessed with groove while executing turns and flourishes with the precision of a well-drilled soul combo…The idea was to go from song to song, to let it flow.”

GET THE DOORS ALBUMS & MERCH, HERE.

Listen to The Doors on Spotify:

Listen to The Doors on Apple Music: