It’s a sad day for fans of impeccably played and styled updates of classic ‘50s and 60s rock’n’roll, as brilliant Welsh guitarist, singer and producer Dave Edmunds has apparently decided to retire. The news came via a post on Friday from his old friend Brian Setzer of the Stray Cats – Dave produced the Stray Cats’ classic first album featuring “Runaway Boys”, “Rock This Town” etc – which said that Dave had flown in to play a couple of shows with Brian and was hanging up his guitar after Saturday night’s show. 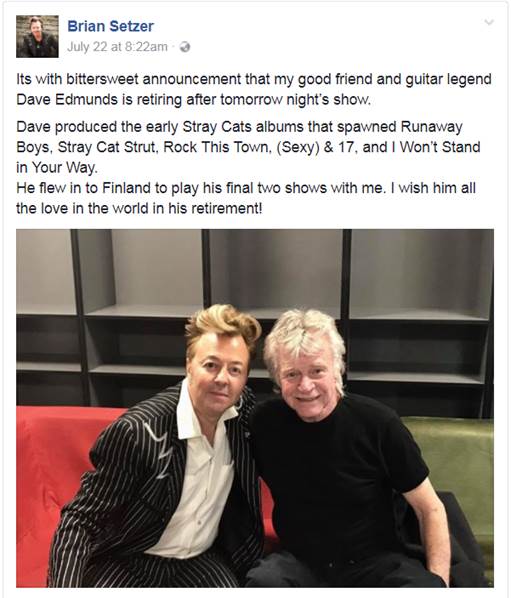 In addition to his production work with the Stray Cats (and, before that, the Flamin’ Groovies, Brinsley Schwarz, Foghat, Del Shannan and others), Edmunds was known for his solo recordings, and for being part of a band that many in the late ‘70s thought was the best rock’n’roll band in the world – Rockpile. Rockpile was a pairing of Edmunds and his mate Nick Lowe, together with drummer (Terry Williams, later of Dire Straits) and second guitarist Billy Bremner. The band worked on both Edmunds’ and Lowe’s albums at the time, but because the two were signed as solo artists to two different labels, Rockpile itself only recorded one band under its own name, the fantastic Seconds of Pleasure.

Prior to his solo career, Edmunds fronted late ‘60s psychedelic blues/rock band Love Sculpture, who had a massive freak hit in 1968 with a turbo-charged guitar instrumental version of the classical piece “Sabre Dance” by the Soviet composer Khachaturian. Freak hits (and lack of career planning) became Edmunds’ stock in trade – his first solo single “I Hear You Knocking” in ‘70  was so out of the blue he didn’t have an album ready to capitalise until ’72,  and his definitive version of Nick Lowe’s “I Knew The Bride (When She Used to Rock’n’Roll)’ came out of the blue in ’77 after he signed to Led Zeppelin’s Swansong label. In between times, he’s worked alongside Ringo Starr in the great British rock film That’ll Be The Day and provided some amazing material for the soundtrack, including a Phil Spector-style production on a version of the Every Brothers’ “Let It Be Me”. His final big hit, a killer rearrangement of the Elvis Costello cast off “Girl’s Talk” from 1979, is probably the song he’s best known for in Australia.

After falling out with Lowe in the early ‘80s, Edmunds continued to record. He had a near hit with a song Bruce Springsteen had gifted him, “From Small Things Big Things One Day”, and cracked the US Top 40 with the Jeff Lyne-produced single “Slipping Away”. By this point he was a figure head for the ‘80s American roots rock scene – bands like the Blasters and Del Lords were massive fans – and he was also a guitarist of choice for projects involving any classic rock’n’roller from yesteryear, working with the likes of Carl Perkins, Chuck Berry, and the Everly Brothers. From Rockpile–era onwards, he shared stages with the likes of Paul McCartney, George Harrison, Ringo Starr, Eric Clapton, Keith Richards and Robert Plant.

Whilst he has spent the last couple of decades at least semi-retired, rare releases including the live A Pile of Rock - Live and his last studio album, 2014’s … Again, suggested he was still in fine form. Alas, he only made it down under once, for a Rockpile tour in ’79 on the back of “Girls Talk” and Nick Lowe’s similarly timed hit “Cruel To Be Kind”.

Let’s celebrate the fabulous career and great recorded legacy of Wales’ greatest rocker, Mr. Dave Edmunds, with some of his greatest tracks and great productions.

Make sure you check out our I Like: Dave Edmunds playlist on Spotify, and also our Let’s Do The Time Warp Again: the ‘50s (& early ‘60s Revival) in the ‘70s playlist, featuring a few from Dave along with other gems from Ol’55, ELO, Daddy Cool, Elton John, Wizzard, Shakin’ Stevens, Ramones, Little Nell, Robert Gordon and more.

Dave Edmunds “I Hear You Knocking”

From the film That’ll be the Day – Dave plays lead guitar in the early Beatles-inspired Stray Cats (how's that for a coincidence?), alongside David Essex up front and Keith Moon on drums. The tracks were recorded completely solo by Edmunds himself

Dave Edmunds “I Knew The Bride”  - live with Rockpile!

A few of Dave’s great productions...