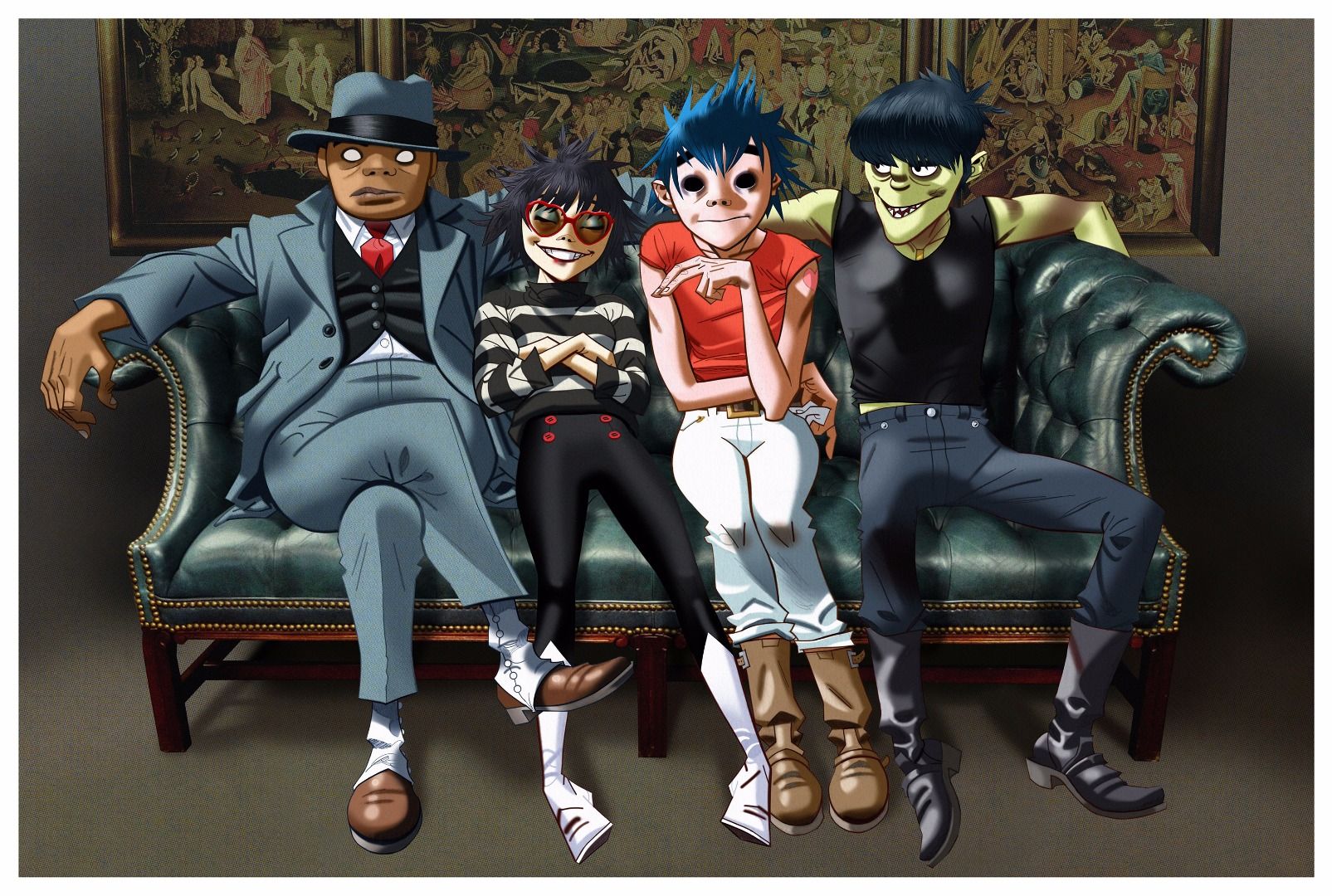 Given the band’s name, it’s no wonder Gorillaz artist Jamie Hewlett often ‘apes’ classic moments from pop culture in his detailed artwork for the world’s biggest animated band. Hewlett Cherry-picks  pop culture references from music, film and art like a Technicolour magpie; while his Gorillaz partner Damon Albarn takes care of the musical orchestration, Hewlett’s complementary art cheekily picks apart society like his old comrade Banksy. Come down the rabbit hole as we investigate some interesting references from the band's  albums and videos…

In their latest promo image (above), Gorillaz are pictured in front of the artwork The Garden Of Earthly Delights, the hellish painting by Dutch artist Heironymous Bosch. A 600 year old triptych filled with nightmare images of demons, freaky animals and scenes of torture, it’s another cheeky admission from Hewlett that his own creations are darker beasts than their colourful rendering suggests. The original version of the Bosch artwork can be seen at the Museo Del Prado in Madrid. 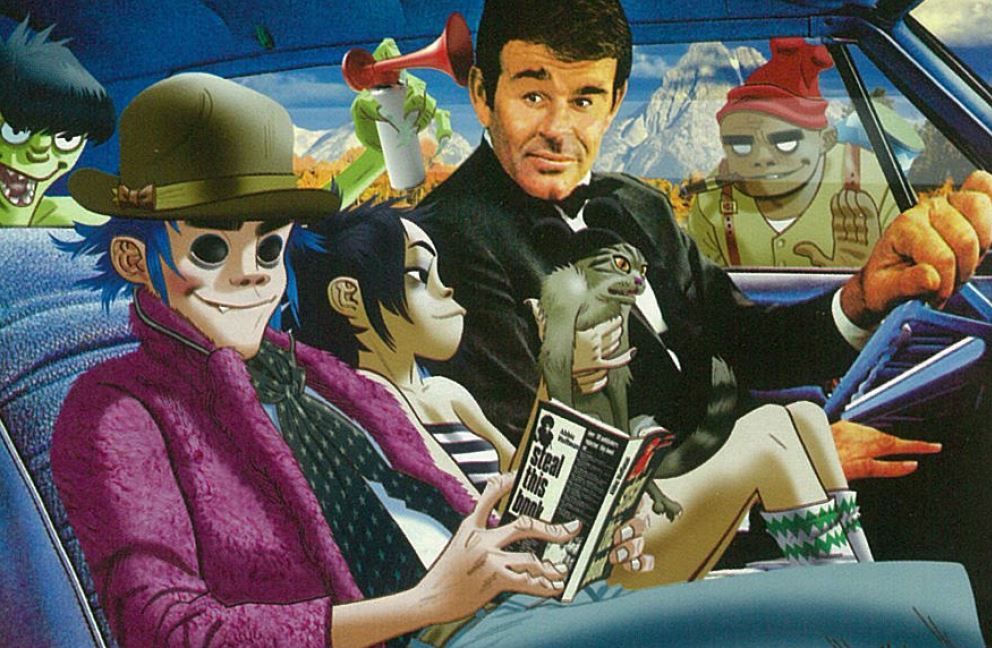 A best-seller from 1971, Steal This Book was written by social activist Abbie Hoffman, who railed against government and corporations. In popular culture, Hoffman remains just as well remembered for stage invading The Who’s set at Woodstock. While rambling into the mic about a political prisoner, Pete Townshend intervened and vented his fury at Hoffman with a terse “Fuck off my stage!”. A relic of hippie ideals, 2D can be seen reading Steal This Book in the new album’s artwork. 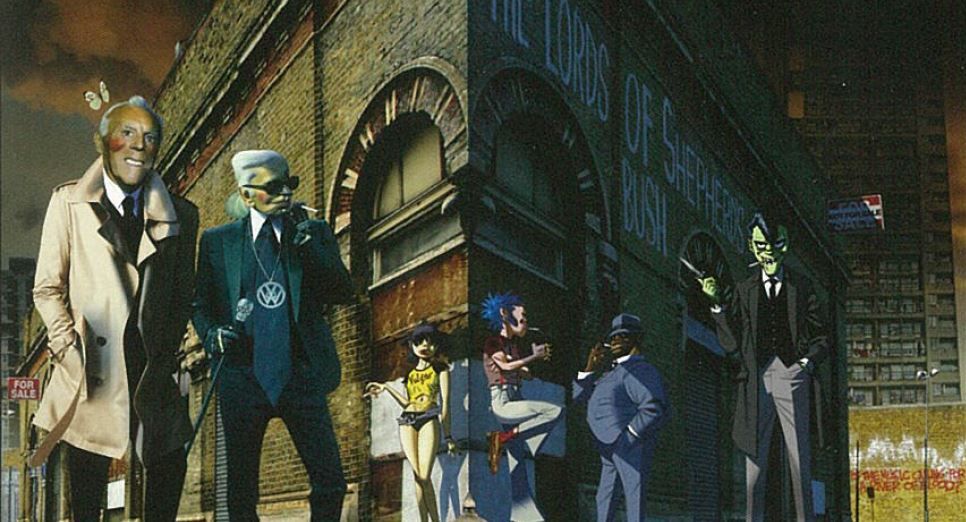 In Humanz’ CD booklet, an intriguing picture of 2D, Murdoc and Russel dressed as gangster dandies is offset by Noodle’s eye-catching outfit. In tight black pants and a yellow T-shirt, the band’s sole female member is striking the pose of another music queen. In 1976 Blondie singer Debbie Harry was photographed as a centrefold in Punk magazine, with the image becoming one of the iconic New Yorker artist’s most famous pics. Apart from the T-shirt being adapted from ‘Vultures’ to ‘Vulgar’ in Hewlett’s update, the art neatly pays respect to a leading light of pop punk. Eagle-eyed fans will also notice references to The Clash’s song "Corner Soul", fashion designer Karl Lagerfeld and The Beastie Boys’s penchant for VW chains in this Hewlett piece. 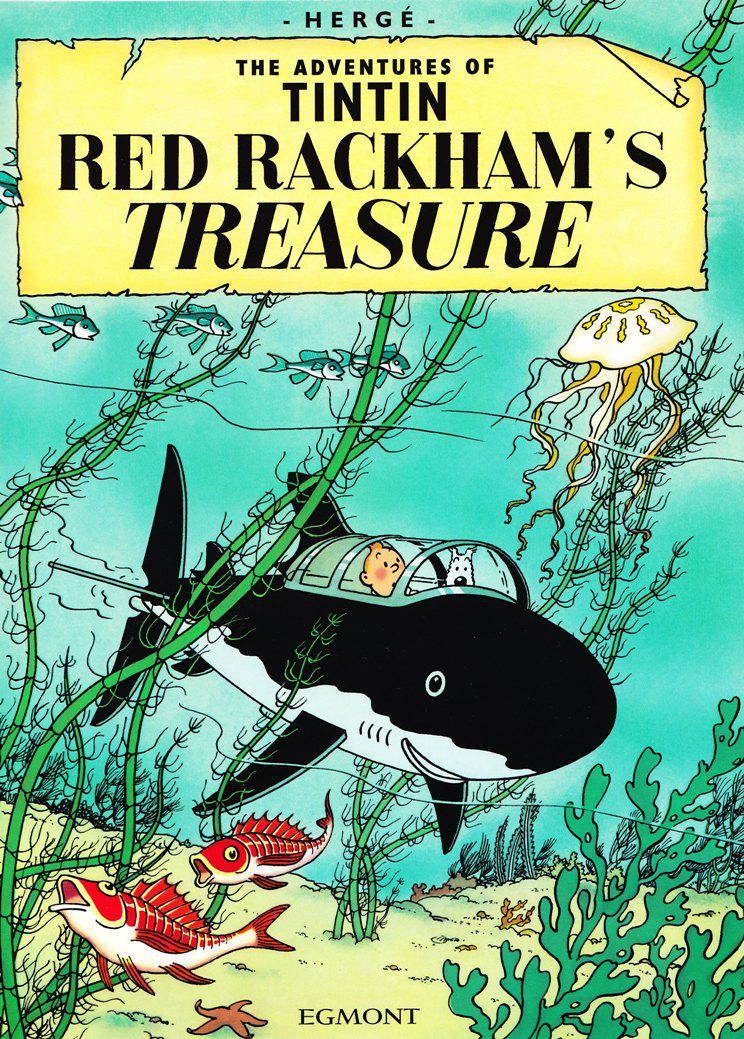 For the video to accompany Plastic Beach’s blissfully dreamy On Melancholy Hill album, Jamie Hewlett animated both the members of Gorillaz as well as their ‘real’ musical accomplices De La Soul, Snoop Dogg and The Clash’s Mick Jones and Paul Simenon (in a humorous throwback to the spinach-chewing Popeye). If the eye-popping sight of psychedelic octopi and punk heroes navigating through the Atlantic wasn’t enough for you, the band’s shark-shaped submarine closely resembles Tintin’s choice of underwater transportation in Red Rackham’s Treasure. Hewlett acknowledged he might have been subliminally influenced by Herge’s Belgian journalist hero. “Possibly, yes,” Hewlett reflected. “ I just thought a shark sub would be cool, but I’d forgotten about Tintin.” 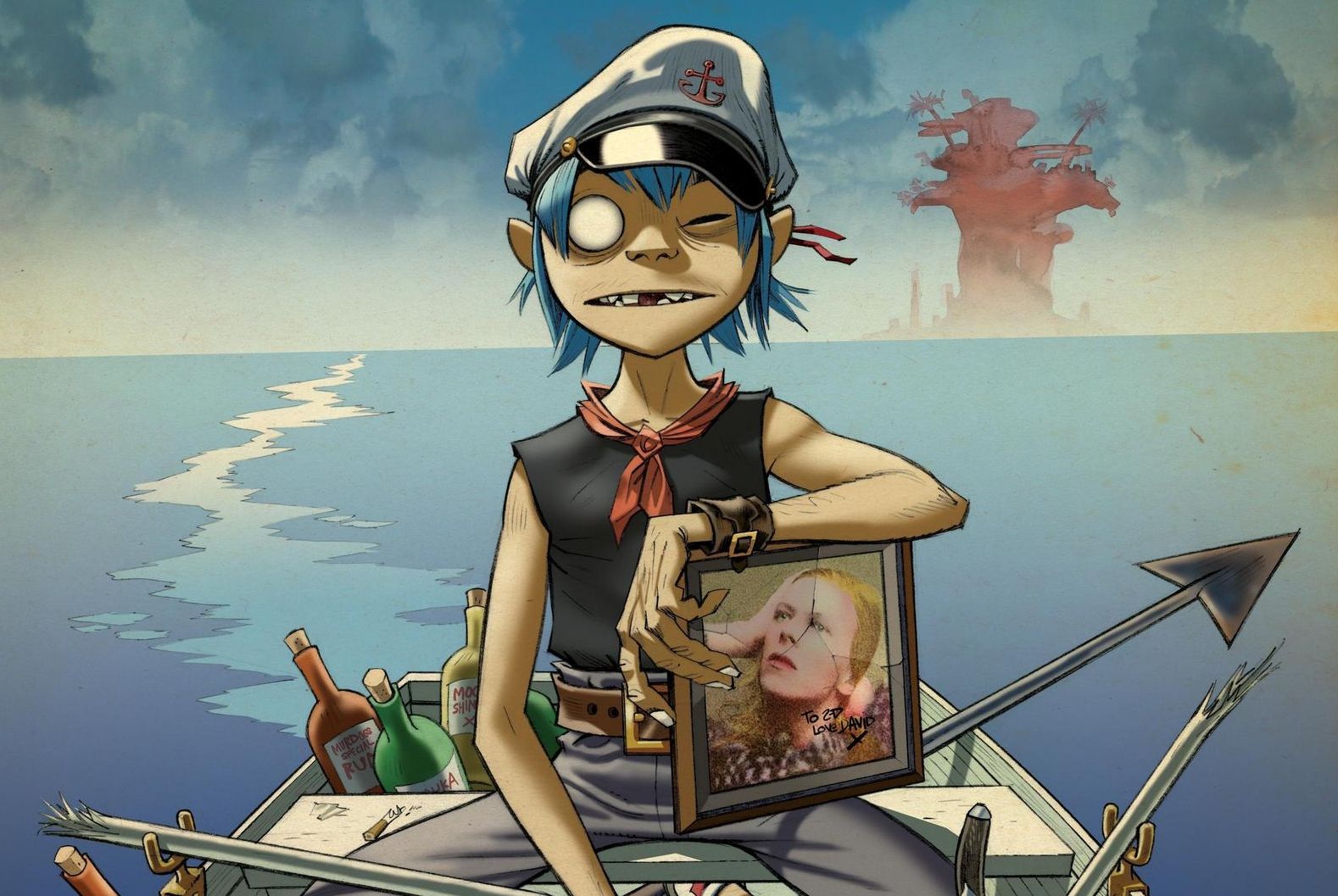 In the artwork for Plastic Beach, Gorillaz’ blue haired vocalist 2D is seen clutching a framed pic and signed pic of David Bowie’s 1971 album Hunky Dory. It’s not the only David Bowie reference in Gorillaz artwork: Hewlett more recently created a demonic take on Ziggy Stardust leering from a drive-in screen. Promoting Plastic Beach in 2010, Hewlett revealed an unrealised plan to feature Bowie on a Gorillaz album. “Damon was going to do something with David Bowie, who left a wonderful answer message on our phone when we were sharing a flat. ‘Hello Damon, it’s David Bowie here… I’d love to talk to you about doing a project… aowww…’ We were going to keep that message because it was really funny, but it was wiped, which was a real shame. Unfortunately that project didn’t materialise either.”

When, in the video for 19-2000, Murdoc is offered the chance for highway salvation, he instead swerves his vehicle down a different route. The sign above the road he takes features the destinations ‘Camp Crystal’ and ‘Overlook Hotel’, which are references to The Shining’s Overlook Hotel (where the winter caretaker - played by a suitably deranged Jack Nicholson - went mad and tried to murder his family) and the Friday The 13 series’ Camp Crystal Lake (where the serial killer Jason Vorhees committed multiple murders). The 19-2000 single’s cover art featured Hewlett’s take on the hockey mask Jason Vorhees wore while committing most of his silver screen dismemberments. Featuring scary twins, a peddle car and mountain-side hotel, the video for the eponymous album’s third single Rock The House also referenced Stanley Kubrick’s adaptation of Steven King’s novel The Shining. 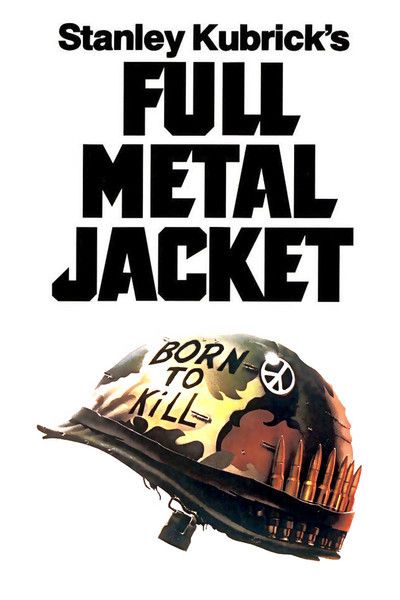 Following on from the previous album’s Kubrick reference, the cover artwork for the Demon Days single "Dirty Harry" was a dead ringer for the iconic film poster for the auteur’s 1987 film Full Metal Jacket. Unlike Full Metal Jacket’s Born To Kill scrawl, the music video for "Dirty Harry" features 2D’s helmet bearing the etching I Love Yoko instead of Born To Die. Which leads us to… 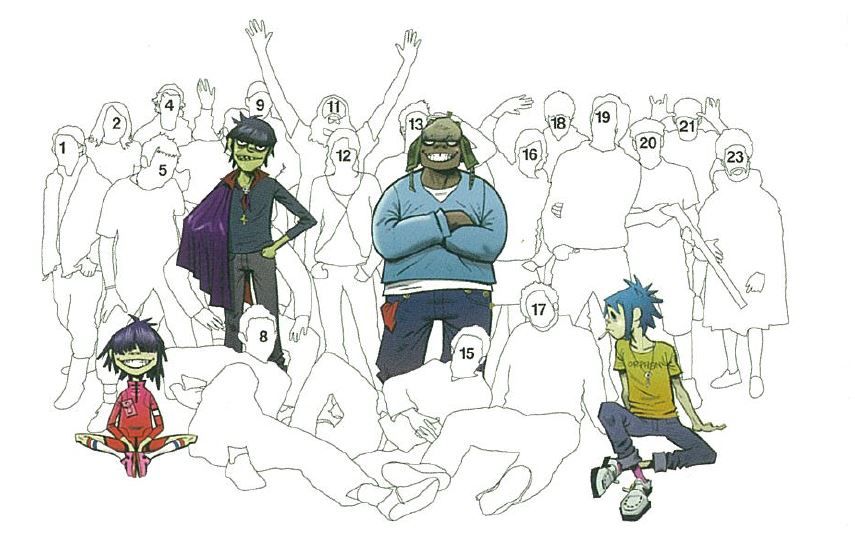 The Fab Four were animated for Yellow Submarine almost 40 years before Demon Days, but it’s obvious Hewlett was drawing inspiration from The Beatles’ while sketching the album’s artwork. From the cover updating the black rimmed portraits of 1970’s Let It Be through to the semaphore artwork in the CD booklet recreating Help’s iconic cover art, the influence of the Liverpool group is strong in this one. Fans also propose a pic referencing the album’s creative team references an old pic offering a who’s who of Sgt Pepper’s Lonely Hearts Club Band.

From their very first music video, Gorillaz were co-opting pop culture references as a form of both deference and dark parody. As well as harnessing elements of George A Romero’s The Night Of The Living Dead, the video for "Clint Eastwood" sees zombie gorillas rise from their grave in a choreographed rendition of Michael Jackson’s Thriller dance.

Compared to many of Gorillaz’ other subliminal touchstones, this is a more overt reference than others in this list. Even so, it’s hard not to take a thrill from seeing Bruce Willis smirking like Die Hard’s John McClane in his Stylo video cameo. Playing a hitman attempting to off Gorillaz members Murdoc and 2D, Hewlett said the Hollywood star took the role after a serendipitous meeting with Albarn and himself. “A good friend of ours came out to Paris when we did the Monkey opera. He asked us if he could bring a friend - it was Bruce Willis! Bruce came along, sat next to me and loved it. We went out partying around Paris with him afterwards and had a very fun evening.” Not only did Willis jump at the chance to be in a Gorillaz music video, Hewlett said he also offered mates rates to his British party pals. “He didn’t charge us any money either, bless him. He’s great.”

Last month, Gorillaz released their latest album, Song Machine: Season One - Strange Timez which was recorded of the course of this year with an awesome list of collaborators, spanning generations and genres. The album arrived on various formats last month, including vinyl, CD and  cassette, and is available in various bundles along with art prints, T-shirts and more! Check out Song Machine: Season One – Strange Timez, here.

Listen to Gorillaz on Spotify:

Listen to Gorillaz on Apple Music: