1. After the 1997 hanging death of INXS singer Michael Hutchence, Faith No More’s Mike Patton was asked to front the band. He refused, although not before suggesting he could perform live with a noose around his neck. In response to INXS opting to replace Hutchence via a reality TV show in 2005, Patton said, “It’s what they should have done from the beginning. I think I’ll take a raincheck on reapplying. INXS should get Flavour Flav to sing for them!”

2. Before they ever made it to the studio, Courtney Love was a Faith No More vocalist in the early 1980s. Faith No More keyboardist Roddy Bottum dated Love and maintained a friendship with her after she was kicked out of the band in 1983. He’s pictured wearing a Hole T-shirt on the sleeve of Faith No More’s 1993 album Angel Dust. 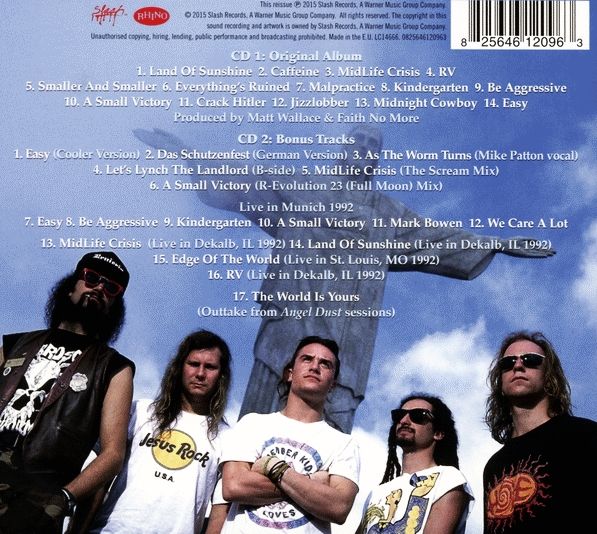 3. Guitarist Jim Martin left the band in 1993 so he could concentrate on growing championship pumpkins. Turning ‘pro’ in 2000, one of Jim’s 500 kilogram monsters won first prize in a Californian contest in 2007. The Big Pumpkins website includes Jim in a list of California’s best pumpkin growers. Martin says he bought a packet of giant pumpkin seeds in a hardware store in 1993 before he became “hooked” after learning “radical techniques and implemented them with amazing results”.

4. A rift between Red Hot Chili Peppers and Faith No More dates back almost 20 years. RHCP frontman Anthony Kiedis complained in his autobiography By The Way that Mike Patton’s movements and style in Epic’s music video was “like I was looking in a mirror”, having earlier suggested to Kerrang! “My drummer says he’s gonna kidnap [Patton], shave his hair off and cut off one of his feet, just so he’ll be forced to find a style of his own.” Patton’s other band Mr Bungle retaliated by dressing as the Red Hot Chili Peppers and parodying the band during a Halloween show in 1999, adding offensive lyrics to their renditions of "Give It Away", "Under The Bridge" and "Scar Tissue". In an interview with AV Club at the time, Patton said Mr Bungle had been dumped from the 2000 Big Day Out festival line-up, “specifically because Anthony Kiedis did not want us on the bill. He threatened to pull the Chili Peppers if Mr Bungle was on the bill. Now, rationalize that one! That's so fucking pathetic!”

5. Mike Patton voiced all the zombies in the Will Smith-starring I Am Legend, a post-apocalyptic film based on the 1954 novel of the same name. The frontman was billed in the credits as Michael A Patton.

6. What links Billy Idol, Robert Plant, Lenny Kravitz and Poison? Apart from featuring in some of rock’s most famous tales of sex, drugs and debauchery, these acts all gave Faith No More support slots in their fledgling years. “Robert Plant was an amazing guy,” keyboardist Roddy Bottum admitted of their US tour dates with the Led Zeppelin frontman in 1990. “Super sweet, really supportive, a fan of ours and a legend. It was flattering that he wanted to take us on tour. One day we rode with him in the back of a pick-up truck in some weird city and stopped and had drinks at a gay bar. That kind of blew my mind.”

7. The “ewwww!” Mike Patton bellows in Faith No More’s cover of The Commodores’ Easy is said to have been aimed at Jim Martin, whose guitar solo kicks in immediately after Patton’s disparaging exclamation.

8. At his very first gig with the band on 4 November 1988, Mike Patton severed the arteries in his right hand with a broken bottle. Patton required micro-surgery after the gig at San Francisco’s I Beam, which was filmed for the video "From Out Of Nowhere". The singer now has no feeling in his right hand and a scar running from his palm up his wrist.

11. Björk has claimed the fish seen flipping about at the end of Faith No More’s breakthrough Epic video was actually hers. "There was a party at Roddy's mansion and I was just coming from a poetry reading in San Francisco,” Bjork said in an interview with CNN. “I had been given the fish at that poetry reading and brought it to Roddy's party. That's the last time I ever saw him." Shortly after Mike Patton appeared on Bjork’s 2004 album Medulla, he gave his own thoughts on the fishy tale: “That was her story and I guess I’ll have to stick with it.”

12. It’s sold more than two million copies and was named in a 2003 issue of Kerrang! as the most influential album of all time, but Angel Dust wasn’t loved by everyone. Record label executives who attended the sessions for Angel Dust suggested the band call it Commercial Suicide. Producer Matt Wallace said one of them added, “I hope none of you guys bought houses.”

13. Former guitarist Jim Martin, who made an appearance in Bill & Ted’s Bogus Journey in 1991 as “Sir James Martin, head of the Faith No More Spiritual and Theological Center”, was best friends with Cliff Burton, the Metallica bassist who died in a bus crash in 1986. In tribute to his dead mate, he can be seen wearing a Cliff Burton T-shirt in the Epic video, as well as in multiple Faith No More photoshoots. “Cliff was a good friend,” Jim said in 1997. “He taught me a lot. We played in a band together called Easy Street, in the ‘70s.” As well as music, the teenaged pair also enjoyed playing Dungeons & Dragons together.

14. As the lyrics to King For A Day… Fool For A Lifetime’s "Cuckoo For Caca" suggest, Mike Patton had an early ‘90s thing for obscene toilet humour. As well as drinking his own urine from his boot on stage in London in 1993, he also enjoyed what he called “shit terrorism”. This included pooing in an orange juice container destined for Axl Rose and pushing a ball of poo into a hotel hair dryer “so that the next guest to dry their hair would get hot shit in their face. Ain’t that rock n’ roll?”

Listen to Faith No More on Spotify:

Listen to Faith No More on Apple Music: