He was in AC/DC in their heyday, and then Finch and Heaven when both those bands had a crack at the US in the late ‘70s and early '80s.

Of late he’s been playing in AC/DC’s early Alberts label mates, Ted Mulry Gang aka TMG. (We recently told you about their upcoming Ted’s Birthday Bash (to celebrate Ted’s 70th and commemorate the 15th anniversary of his passing)  and chatted to Herm Kovac about the new line-up and the expanded reissue of the great TMG Live album.)

Now, thanks to a Facebook post this afternoon from ex-Finch, Skyhooks, and Angels guitarist Bob Spencer, we know that Mark Evans has also joined Rose Tattoo! 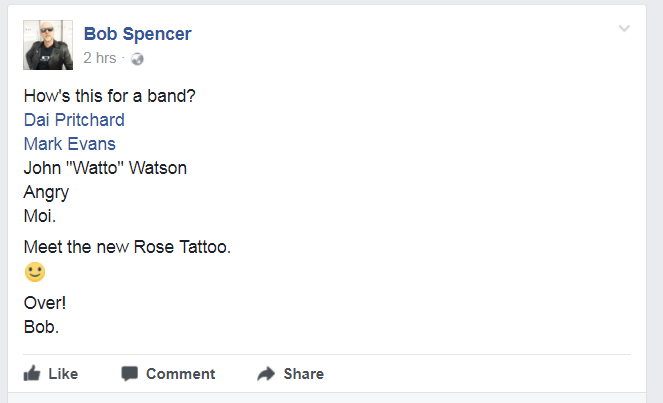 Although both Bob and Mark were both members of Finch, they were never in the band at the same time – Bob left in March ’77 to replace Red Symons in Skyhooks, and Mark joined in July ’77. They soon signed to CBS, released the album Nothing to Hide and ultimately changed their name to Contraband in order to have that crack internationally.

You can read about those days in Mark great 2011 book Dirty Deeds.

Mark and Angry are obviously old mates – AC/DC were the Tatts’ big brother band back in the Alberts day – and the pair have of late been playing in Blood, Sweat & Beers, a touring live show based around the music written about by Murray Engleheart in the fantastic book of the same name. Check out Murray’s Blood, Sweat & Beers: Oz Rock From the Aztecs to Rose Tattoo  book here. (Yes you have a lot of reading to do.)

The Tatts and the Angels obviously have a lot of shared history as well.

Rose Tattoo will be joining the Angels for select dates on the Angels’ Brothers, Angels & Demons tour in October and November: