Prince: iconic guitarist… gifted songwriter… exceptional baseball player? According to Dr Matt Fink, Prince’s musical offsider between 1978 and 1990, Prince’s skills extended beyond the studio and live arena and onto the softball diamond.

“Occasionally we would take a break from rehearsing and we’d walk down to the nearby baseball field,” the keyboardist says. “We’d play a round of softball with all the band and divvy up the teams by picking from a hat. Prince was very athletic and was good at everything. When he wasn’t rehearsing or recording, he liked to shoot baskets, play ping pong or play pool. He did a lot of weight training on the road and would always keep his physique toned up. We’d travel with free weights and barbells backstage and he’d do weights before shows. He’d encourage the band to do the same – anyone could get on the weights if they wanted to.”

Given the extraordinary number of musical projects he was juggling between 1986 and 1987, it’s hard to believe Prince found the time for physical extracurricular activities. In the wake of 25-million selling 1984 album Purple Rain, the joyous psychedelia of 1985’s Around The World In A Day and 1986’s elegantly crafted Parade, Prince was said to be simultaneously working on the albums Dream Factory, Roadhouse Garden and Crystal Ball. None of these fabled ‘80s volumes ended up being released by the contrary and prolific artist, with a number of the recordings instead ending up on 1987’s expansive double album Sign O’ The Times. Dabbling in both genre-bending and gender-bending, some of Sign O’ The Times’ songs, including the single "If I Was Your Girlfriend", were initially recorded for another of Prince’s shelved ‘80s albums: Camille. Pitch-shifting Prince’s vocals to create an androgynous timbre, Fink suggests Prince’s female alter-ego Camille was originally created as a studio in-joke.

“I would say so, definitely,” Fink confirms. “Prince had characters he would do: famous people, made-up people or people from his past. He did a few things with punchlines, but most of his jokes were goofing around with people. He was very good at being a mimic and doing impersonations, he was a myna bird. There was another song he did with Morris Day [from The Time] called “Cloreen Bacon Skin” where he was dressed up in make-up, a moustache and smoking a cigarette. He was fun to be around.”

Fink is chatting with I Like Your Old Stuff as part of the promotions surrounding the incredibly comprehensive Sign O’ The Times deluxe reissues. The jaw-dropping Super Deluxe Edition features a treasure trove of unreleased Dream Factory, Camille and Crystal Ball material, as well as live tracks, Sign O’ The Times outtakes and rare remixes pulled from Prince’s famous Vault. Author Matt Thorne’s definitive 2012 biography Prince: The Man And His Music suggests “a large part of the legend of Prince’s Vault rests” on the flurry of creativity during this 1986/1987 era, with Prince also fitting in touring, filming his second movie Under The Cherry Moon and completing the construction of the studio complex Paisley Park. Officially opened a few months after the release of Sign O’ The Times, Matt Fink recalls the first time he entered the sprawling Paisley Park premises as “incredible”.

“It was an amazing facility – something you dream about, really. It was built from a creative place and it was a great environment. It was so new and when you go there now, now it’s a museum, they have left a lot of Prince’s touches intact. Apart from the paint job and the rooms where they’ve decorated it with displays, it still remains pretty much as it was. It is very well done, I’ve been there many times since it opened as a museum.”

Meeting Prince in the late ‘70s when both musicians were still teenagers, Fink and the Minneapolis music icon shared a stage for 12 years before they went their separate ways. Many of Prince’s songs during these salad days were inspired by a procession of muses, including late Vanity 6 singer Vanity, Purple Rain star Apollonia, drummer Sheila E and Susannah Melvoin, Wendy Melvoin from The Revolution’s twin sister. So which of Prince’s girlfriends did Dr Fink get on best with?

“Boy, that’s a great question,” Fink says. “I got along with all of them - I’m diplomatic! I was actually really good friends with Vanity, more than the rest of the gals, mainly because we toured with them on the 1999 tour. The Vanity 6 women in general I got on well with on that tour. I’m still very good friends with Apollonia to this day. I never had a run-in with any of Prince’s women.”

Despite Prince’s classic ‘80s backing band The Revolution splintering before the release of Sign O’ The Times, Fink says his last meeting with Prince in 2014 found the musician considering “the idea of reuniting The Revolution”. While Prince’s death in 2016 robbed them of their gifted leader, the band has since performed in honour of their late boss. At their debut Paisley Park show in 2017, The Revolution concluded their set with 1984’s “Purple Rain”. Despite not earning a co-write on the evocative song, Fink divulges a secret about “Purple Rain”’s creation.

“The first day we were jamming on “Purple Rain” when Prince brought it in to us, I started playing the line that Prince sings at the end, ‘the woo hoo hoo’ bit that everybody joins in on. I was playing that on the piano and Prince latched onto it and it became an important part of the song.

“Working with Prince, there were too many standout moments to count,” Fink reflects. “There wasn’t just one special one, there were several.” 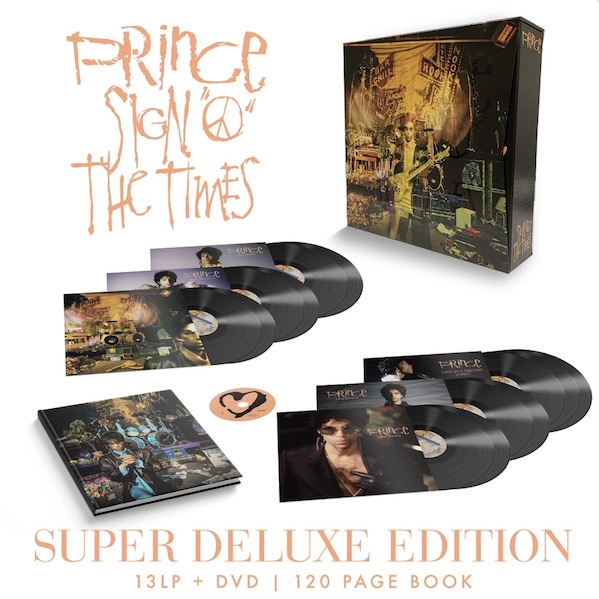 Get your copy of the reissues of Sign O’ The Times in various incredible vinyl and CD formats here.

Listen to Prince on Spotify here: