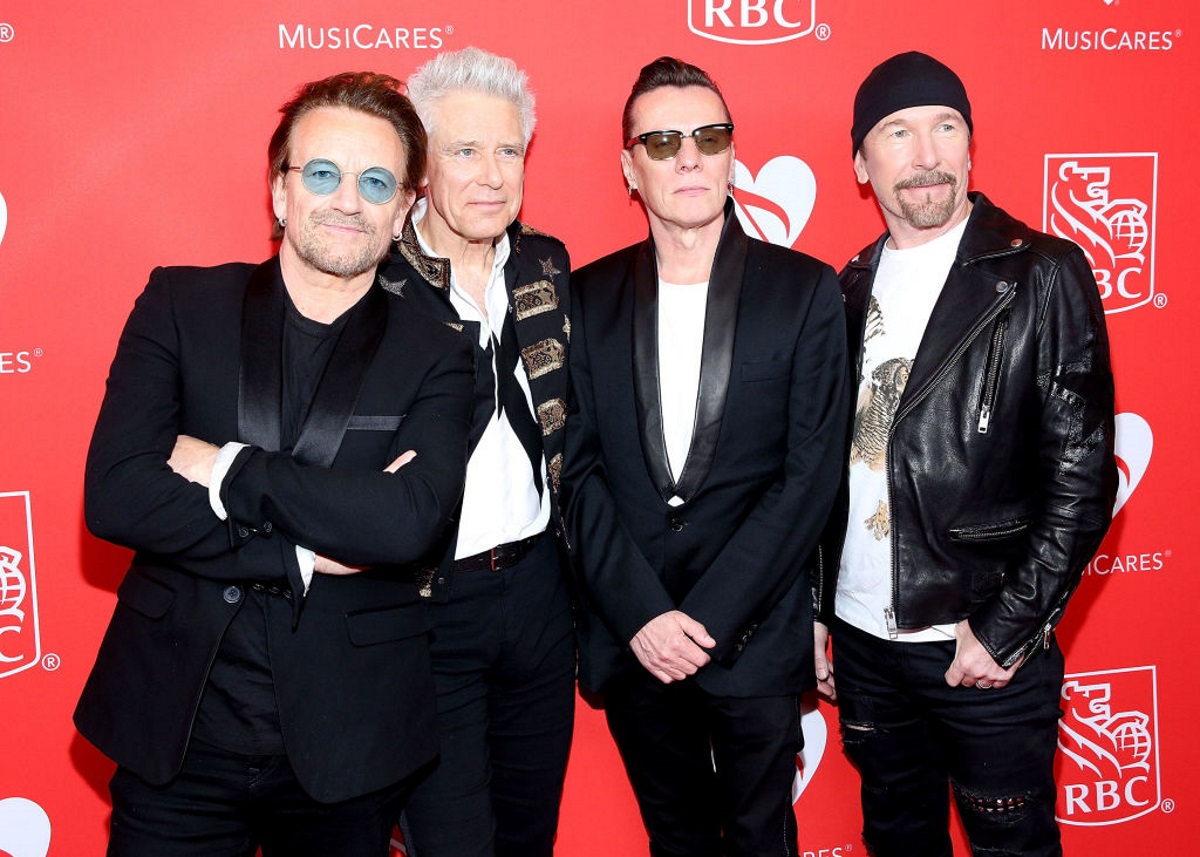 U2, 2017. Photo by Robin Marchant/WireImage/Getty Images.

Fleetwood Mac’s latest line-up change takes their official band member tally to around 18, AC/DC have made it through more than a dozen members and The Doobie Brothers have churned through at least 20 musos over the course of almost 50 years, but not all million-selling groups end up falling out, splitting up or holding their reunions in a courtroom. As Coldplay notch up 20 years since their debut EP this week, we look at six major acts who are still talking to each other after 30, 40 and almost 50 (!) years…

Background: Formed while frontman Chris Martin and guitarist Jonny Buckland were studying at London’s University College, Coldplay’s debut release, the Safety EP, was released 20 years ago this week. The quartet, completed by drummer Will Champion and bassist Guy Berryman, have now been a band for more than half their lives. Their last tour for A Head Full Of Dreams was the third highest grossing tour of all time and saw them playing to 5.39 million people, equivalent to the entire population of Finland!

Key album for the turntable: A Rush Of Blood To The Head (2002). Expanding on the acoustic sounds of Parachutes, A Rush Of Blood To The Head proved there was a lot more to Chris Martin than being the geeky-looking guy walking along a beach in the “Yellow” video. Those who had previously thought of the band as insipid bed-wetters might have been swayed by the brutal truths of album highlight “Amsterdam”, where lyrics about suicide and Martin snarling “I’m sick of the secrets” proved a lot more exhilarating than their later hyperactive pop moments.

To celebrate 20 years of Coldplay, listen to their complete collection on Spotify here...

Background: Guitarist The Edge’s brother Dik Evans was a guitarist in U2’s earlier ‘70s incarnations The Hype and Feedback, but by the time the Dublin teenagers laid down their first EP “Three” in 1979, the line-up was the same quartet who’ve now sold in excess of 175 million albums worldwide. Only one official U2 gig in the last 40 years hasn’t featured the core group of Bono, The Edge, drummer Larry Mullen Jr and bassist Adam Clayton: at Sydney’s first Zoo TV show in 1993, bass tech Stuart Morgan replaced an incredibly hungover Clayton. The move was enough to scare Clayton into ongoing sobriety.

Key album for the turntable: Achtung Baby (1991). Fans of The Joshua Tree could be forgiven for thinking there was a problem with their stereo when they pressed play on U2’s first album of the ‘90s: the opening seconds of “Zoo Station” sounded like a chainsaw falling down an elevator shaft. More than a quarter of a century on, its dark beauty and incredible melodies still sound potent.

Background: Since 1970, the indefatigable ZZ Top have consisted of guitarist Billy Gibbons, bassist Dusty Hill and drummer Frank Beard. The title of their 1971 LP – ZZ Top’s First Album – says it all: these tres hombres were all about keeping their bluesy output down-to-earth, no matter how many sexy ladies or dubious double entendres they filled their popular music videos with.

Key album for the turntable: Eliminator (1983). Mixing chart-topping commercial ‘80s production with the blues riffs which had ultimately powered each of their seven albums up to this point, Eliminator introduced ZZ Top to the MTV generation and into millions of homes around the globe. No self-respecting classic rock station would dare ditch “Gimme All Your Lovin’”, “Sharp Dressed Man” or “Legs” from their playlists – they still sound fresh today.

Key album for the turntable: Black Holes And Revelations (2006). If the Hipgnosis cover artwork wasn’t a sign Muse were aiming for a spot alongside UK rock god forebears Pink Floyd, Led Zeppelin and Black Sabbath, the music inside the proggy sleeve saw the band turning their rock determination up to 11. In a sign of how Muse recalibrated alternative rock, “Knights Of Cydonia”, a song which sounded wilfully perverse upon its release 12 years ago, topped the Triple J Hottest 100 and set the tone for the band’s fearless rock opera pursuits to come.

Background: The Kinks’ Ray and Dave Davies, Sepultura’s Max and Iggor Cavalera and Oasis’ Liam and Noel Gallagher have all proven over the decades that being blood relatives won’t save you from band fisticuffs and massive fall-outs. For southern boys Kings Of Leon (the three brothers Caleb, Jared and Nathan Followill joined by cousin Matthew Followill), they’ve held it together for almost 20 years despite a couple of backstage fist fights (usually after a few too many glasses of moonshine). Beyond their penchant for liquor, ladies and late night parties, the Followills have notched up a strong discography of albums which incorporate southern rock, tasty riffs and choruses as big as Tennessee. A favourite on Big Days Out and Hottest 100 countdowns over the years, fourth album Only By The Night was Australia’s biggest selling album of 2008 (nine times platinum – not a bad effort).

Key album for the turntable: Because Of The Times (2007). A few months before the release of their third album Because Of The Times, Kings Of Leon toured Australia as Pearl Jam’s support act. Playing to half empty stadiums, the band trialled unreleased Because Of The Night songs such as “On Call” – and left early arrivals with their jaws on the floor at the quartet’s ambitious transition to genuine contenders. Songs such as “Knocked Up” and “Black Thumbnail” still sound like great Southern anthems in the tradition of Lynyrd Skynyrd and The Allman Brothers.

Background: Initially known as Seymour during their initial late ‘80s tenure, Blur rivalled fellow UK act Radiohead in terms of musical expansion and genre-leaping progression over the course of the ‘90s. While there was a slight blip to their status of maintaining all original members when guitarist Graham Coxon left ahead of 2003 album Think Tank’s release, he returned to the fold in 2009 for lauded reunion shows and the original quartet subsequently recorded 2015’s excellent comeback album The Magic Whip.

Key album for the turntable: Blur (1997). Given their transition from cheesy provincial profilers to genre-hopping elder statesmen of the British rock scene, none of Blur’s studio albums gives a truly great litmus test of their overall sound. For a showcase that’s equal parts exhilarating and confounding, you can’t go past their defiant self-titled album from the tail end of Britpop. Whether it’s the gorgeous acoustic melancholy of “Beetlebum”, the raucous 85-second clatter of “Chinese Bombs” or the intimate “Space Oddity”-esque ambience of “Strange News From Another Star”, there’s lots to admire here. It’s also the album where you’ll find the perennial pop punch of “Song 2”, which finally saw the US paying attention to the band (albeit briefly).

Background: They’ve variously knocked out a few solo projects, collaborated with artists including PJ Harvey, Bjork and Neil Finn and soundtracked Hollywood films, but Radiohead have been a consistent five-piece since long before their debut album Pablo Honey in 1993. Initially called On A Friday when they formed in Oxford in 1985, frontman Thom Yorke, drummer Phil Selway, guitarist Ed O’Brien and bassist Colin Greenwood were joined by Colin’s young teen brother Jonny Greenwood, the musician responsible for the abrasive thrashes of guitar on their breakthrough hit “Creep”. The band effectively climbed their way out of the ‘90s one-hit-wonder box with subsequent albums such as 1997’s OK Computer and 2000’s Kid A, leaving other UK novelty hit-makers such as Babylon Zoo and White Town in the dust.

Key album for the turntable: The Bends (1995). Perhaps underrated due to the impressively diverse output which followed it, The Bends found Radiohead creating a work of alternative rock genius at a time when many had already written them off as underwhelming indie moaners. Anyone who has since found Yorke and his pals too arty, dull or whiny need only listen to this album to realise the error of their ways. A package of a dozen high calibre songs, most bands would kill to have even a handful of these spine-tinglingly transcendent moments in their canon.