This month marks 40 years since the release of one of Split Enz’s timeless singles, "History Never Repeats". At the time of "History Never Repeats"’ release, the New Zealand group were coming off the massive success of 1980’s True Colours – an album that was still being promoted around the globe when the time came to record its successor. True Colours, the Enz’s fifth album, had seen the group peak at number one on the album charts in both Australia and New Zealand, as well as breaking new ground for the band in both the US and Europe. The True Colours single "I Got You" had received a particularly warm welcome in the UK, where it reached #12 in the singles chart and even popped up in an episode of Coronation Street.

True Colours producer David Tickle returned to the fold as producer as the band gathered in Melbourne for recording sessions, but this time around it was hard to repeat the studio magic of this album's predecessor. Guitarist and songwriter Neil Finn felt Tickle was being arrogant, while older brother Tim Finn felt Tickle was playing favourites with Neil. In the Split Enz Spellbound documentary, narrator Sam Neill suggested Tickle had become “more difficult to work with” a little over a year on from "True Colours"’ success. “It’s never the same the second time around,” Neil acknowledged. 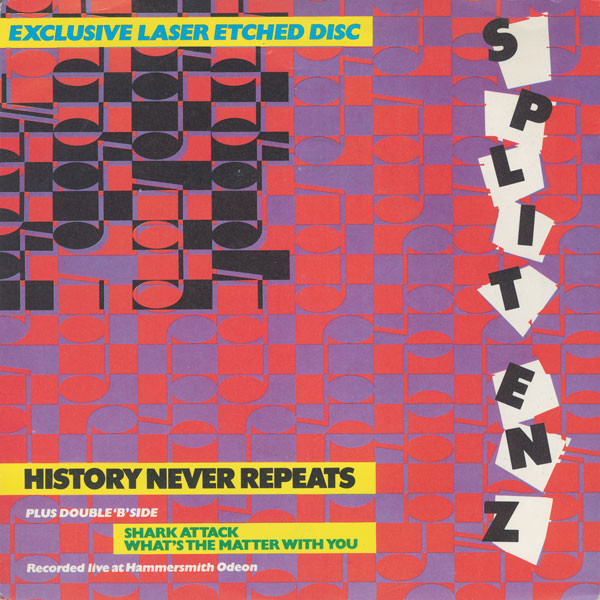 The ructions resulted in Tickle deciding to mix the resulting album back in his UK homeland at Farmyard Studios. When the band popped by the studio to hear the mix while in the country touring "True Colours", Tickle refused to give them a working copy.

In spite of the icy relationships between the group and their producer, Split Enz’s sixth album was given an upbeat title. In their homeland of Aotearoa, it was christened Waiata (‘a celebratory song’ in the Maori te reo language), while in Australia it went by the name Corroboree, an Indigenous word for dancing celebration. Artwork designer (and newly inducted band drummer) Noel Crombie had hoped each territory where the album was released would find a similarly buoyant First Nations phrase to call the album, but the rest of the world took the New Zealand title. The artwork also caused troubles for designer Crombie, with the original earthy hues of the album cover swapped to a violet shade in other markets. The artist noted in the Spellbound documentary the US label told the Enz “brown is the colour of shit – you can’t use brown”. Crombie felt the bastardisation of his artwork ruined the whole aesthetic of the package.

While it wasn’t without its birthing issues, the arrival of Corroboree/Waiata in March 1981 tied in with the release of one of the band’s perennial favourites, "History Never Repeats". The single, which followed on from December 1980’s "One Step Ahead", was whipped up by Neil Finn while on tour in Western Australia.

“I wrote it in Perth,” Finn told the New Zealand Herald in 2001 while promoting his solo album One Nil. “Everybody in the world called it "History Repeats Itself". No one could get into their heads it was "History Never Repeats". I think it's a good slogan for my current mindset, trying to make each year distinctive from the last.”

It appeared Split Enz and The Swingers enjoyed a friendly rivalry while they were both doing well.

“I remember playing ["History Never Repeats]" to Andrew Snoid when he was in The Swingers and him being blown away by it,” Neil told the New Zealand Herald. “But then at the same time, I was listening to them do "True Or False" on The Swingers' record [1980’s Practical Jokers] and being completely in awe of it. So there's always these situations where you exchange music with people and theirs sounds so much better to you - but it's the same for them though.”

The week "History Never Repeats" was peaking in the country it was recorded, the band was arriving in the United States for the first international dates of the Waiata Tour. The quintet (featuring the Finns, Crombie, keyboardist Eddie Rayner and bassist Nigel Griggs), spent May traversing the US, crisscrossed Europe through June and then returned to complete another run of US dates in July and August. Having debuted at number one in the NZ and Australian charts, Waiata also crept into the top 50 in the US. It reached #45 during its 19-week chart run Stateside, with the videos for both "History Never Repeats" and "One Step Ahead" being among the first clips aired on MTV when it launched in 1981.

"History Never Repeats" remains one of Split Enz’s most popular songs on streaming services and is still regularly heard on classic rock radio. It’s also one of the back catalogue songs for which songwriter Neil Finn holds a torch.

“I like "History Never Repeats",” Finn admitted to the "New Zealand Herald" in 2001. “I played it recently with Jim Moginie [of Midnight Oil] and Wendy Melvoin [of Prince & The Revolution] on guitar and it was just awesome. So it's a song I actually quite like still.”

He’s not the only one: the track has since been covered by Finn followers including Shihad, Powderfinger and Pearl Jam. Finn even covered the song in the early years of Crowded House to bolster the fledgling band’s sets, while it was also amusingly performed as the final encore on Split Enz’ 2008 reunion tour. Here are just a few versions of the song performed during its 40 years.

Split Enz live in Canada on the Waiata Tour in 1981 (featuring some great Eddie Rayner keyboards).

Pearl Jam joined by Neil Finn and Tim Finn during a 1995 Auckland show (they also played Split Enz’s I Got You during the encore). The track was officially released in 2019.

Split Enz reunite for the Sound Relief benefit at the MCG, 2009.

You can read some of I Like Your Old Stuff’s other odds and Enz here:

THE BEGINNING IS THE ENZ – NEIL FINN’S EARLY DAYS

Listen to Split Enz on Spotify: