“To some people, True Colours is the holy grail of Split Enz records,” Split Enz keyboardist Eddie Rayner acknowledges. “Some people might be disgruntled with the new mix, but other people are going to love it. I think it’s audibly better and it's brought it back to its former glory.”

Rayner is speaking from New Zealand about the new 40th anniversary mix of True Colours, the group’s fifth album, which has now been reissued in multiple coloured vinyl, picture LP and CD editions. Working from the original tapes, Rayner has given the classic 1980 release a sparkling sonic overhaul. As well as classics such as "Shark Attack", "I Got You" and "Poor Boy" earning a spit and polish, the 2020 mix also highlights previously hidden elements. Final True Colours track, the disco-flavoured “The Choral Sea”, has generally been described as an instrumental, yet the new mix makes it clear frontman, Tim Finn is intriguingly whispering lyrics about the 'deep blue sea' within the track’s Giorgio Moroder-esque rhythms. “I Hope I Never” and "I Wouldn’t Dream Of It” also showcase striking examples of Noel Crombie’s percussion being restored.

“For some reason when we mixed the original True Colours we must have had some kind of prejudice against percussion, because we left a lot out on the mixes,” Rayner says. “I’ve actually put a lot of Noel Crombie’s stuff we recorded back in, which was omitted from the original mixes. In “The Choral Sea” those bits of Tim singing are on the original, I just made them a bit more audible.”

While Tim Finn has been quoted as marvelling at the “intensity” of Rayner’s revitalised True Colours, his brother and co-writer Neil Finn, now a member of Fleetwood Mac, hasn’t provided too much feedback on the anniversary edition.

After more than five years of honing their songwriting and delivering extraordinary live shows, True Colours was the commercial blockbuster which took Split Enz to the top of the Australian and New Zealand charts. The album sold more than 700,000 copies around the globe, while the Neil Finn-penned single “I Got You” spent eight weeks at number one in Australia. The band’s breakthrough arrived after a dispiriting period based in London, with the band line-up in flux and money seriously short.

“There was never really any talk of giving it away but it was pretty touch and go there,” Rayner admits. “When we were in London we decided we’d sack everybody - we sacked our management, our agent, our record company - as we felt they weren’t doing the right thing by us. We soon realised how difficult it is to work without those administrators around you to get things moving, make all the calls and do the legwork. But no, there was never any talk of the band ending or giving up. We knew right from day one the band had something very special and we were on a mission.”

Those late ‘70s days of disenchantment in London seep into the lyrics of True Colours, where Tim Finn’s songs such as “Nobody Takes Me Seriously” and “I Hope I Never” are sung from a melancholy outsider’s perspective.

“Tim went through an amazing writing spell in ’78, he wrote some absolute pearlers and “I Hope I Never” was one of them,” Rayner says. “The Finns are two of the greatest songwriters the world has ever seen in my opinion, they’ve written so many different timbres of lyric.”

As well as chart success, Split Enz collected plenty of famous fans before their split in 1984. Martin Scorsese, Bette Midler and members of the Sex Pistols all showed an interest in the band at various times, with Rayner also adding Kate Bush to this diverse roll-call of celebrity acolytes. Bush, who was recording her 1978 debut The Kick Inside at London’s AIR Studios at the same time Split Enz were laying down 1977’s Dizrythmia, was intrigued by the quirky New Zealanders sharing the studio space.

“We used to talk in the corridor and I took her for a coffee a couple of times downstairs to the Angus Steakhouse in Oxford Circus,” Rayner says. “She was just this little girl, 17 years old, and we used to hear her overdubbing her vocals. We thought it was quite a funny little sound, but then she became Kate Bush! She was a really nice person, very supportive. I think she’s written since that Split Enz were one of the bands she admired at the time.” 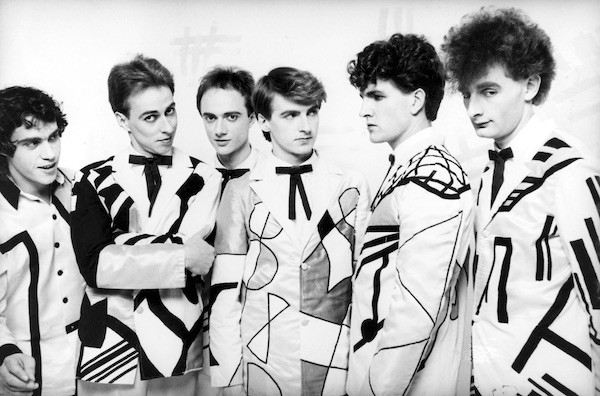 No less than Paul McCartney attended a 1979 Split Enz gig in London ahead of the band returning to Australia to record True Colours. The former Beatle would later record 1986 album Press To Play with famous musicians including The Who's Pete Townshend, Phil Collins, Tony Visconti, Carlos Alomar and… Eddie Rayner.

“Not a bad band, eh?” Rayner chuckles. “Hugh Padgham, who we’d worked with [on 1982’s Time And Tide and 1983’s Conflicting Emotions] was producing part of the album for Paul. Paul was lamenting the fact they didn’t have a keyboard player and Hugh said, ‘Get Eddie over, he’ll do the job’. I was lying in bed in Melbourne at three o’clock in the morning when there’s a call. It’s Paul McCartney on the line! He’s in his studio in the south of England and asking me to come over and write and play the keyboard parts for the album. It was incredible to be playing with Phil Collins and Pete Townshend and I made a firm friend in Carlos Alomar, who was a lovely guy.

“Paul McCartney was just a bloke in the studio with me,” Rayner says, noting the former Beatle's lack of ego. "Most mornings we’d arrive and him and I would sit there and just jam. I’d play piano and he’d play drums, as he’d prefer to play drums than bass. We’d sit there and jam for an hour every morning, just the two of us. It was just like jamming with Tim Finn or Neil Finn, really - same vibe, same ultimate musicality. And a lovely bloke too, a very generous guy.”

Listen to Split Enz on Spotify: