Forty years ago this month, The B-52's had just wrapped up their first Aussie tour, which included a debut live appearance on our very own Countdown. Here’s a look back at their colossal first trek down under.

In 1980, the year that would end with his death, John Lennon said the B-52's were his favourite group, and strangely enough, cited “Rock Lobster” in particular as an inspiration for his comeback album Double Fantasy. Other than the possible similarity between B-52 Cindy Wilson’s screech on the track and that of Yoko Ono, there doesn’t seem to be a lot of sense in that, although Lennon did seem to like artists that referenced his era, the ‘60s – the Raspberries and Cheap Trick were two others he endorsed in the ‘70s – and the B-52s were big on the ‘60s sounds, even if it was the kitschy side of things they dug.

Here in Australia in 1980, we loved those ‘60s sounds too. Australian punk and New Wave had embraced ‘60s sounds – the Saints and Radio Birdman had both recorded songs from the era, and classic new wave singles like “77 Sunset Strip” by the Riptides, “Things Will Be Different” by Little Murders and “She’s Got The Money” by Young Modern were steeped in them. The Church, The Sunnyboys and the Hoodoo Gurus – and paisley shirts and Cuban heel boots - were just around the corner. The Australian alternative scene discovered the B-52s early – before Warner Bros signed them – on the back of import copies of the group’s self-released first single “Rock Lobster”, a re-recording of which would appear on their first album in 1979. “Rock Lobster” was a staple on radio stations like 3RRR and 2JJ early on, and when the band’s first album did arrive, we were all over it. Countdown got into the swing of it and before long – certainly, before a lot of other countries cottoned on – the B-52’s were making their way to the top of the charts here.

Forty years ago this month, just before the release of their second album Wild Planet, the B-52’s wrapped up their first down under tour. They were here for about three weeks, and in addition to the above- mentioned Countdown appearance, played a whopping four shows in Sydney! In those days it was common for shows to be added onto the end of a run if there was demand; we can only assume that is what happened here. 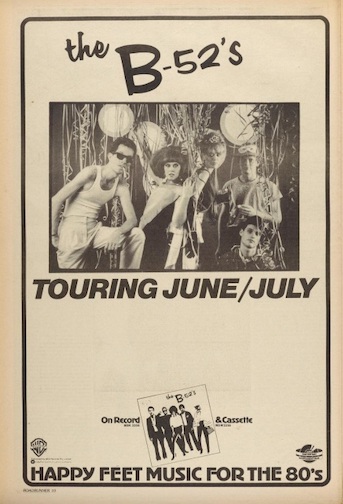 Here are the dates that we’ve been able to establish. We figure we’re missing at least one Brisbane show, possibly a second Melbourne show (a club show?), and are thinking that they probably headed to New Zealand before returning to Sydney for the final Hordern shows. If you have any more info, or were even lucky enough to be there – we’d love to hear from you!

Finally, here’s a complete show, recorded in the US a week or so after the Australian tour ended, at the beginning of the band’s first American headline tour. It’s in B&W – and the B-52s are certainly not a band who should ever be seen in anything but technicolour – but it still captures their undeniable live energy. Enjoy!

Listen to the B-52s on Spotify:

Listen to the B-52s on Apple Music: