Despite its none-more-British lyrics referencing Oscar Wilde, Carry On films and the monarchy, The Smiths’ third album The Queen Is Dead has found an enduring fanbase far beyond the England’s cheerless marshes. An influence on acts including Radiohead, Ryan Adams and The Killers, The Smiths’ short lifespan left an indelible mark on popular music. Here we uncover 21 facts about their seminal 1986 album.

1. In Morrissey’s Autobiography, the frontman suggested George Martin declined to produce The Queen Is Dead because he preferred to be remembered for his Beatles albums.

2. In the UK, The Queen Is Dead was kept off the number one position by the Genesis album Invisible Touch.

3. English actors Alan Bates and Albert Finney turned down Morrissey’s request to be on the album cover. Footballer George Best also refused to let his image be used on the single art for The Queen Is Dead single "The Boy With The Thorn In His Side".

4. The Smiths completed recording of The Queen Is Dead at Jacobs Studios in October 1985. Studio owner Andy Fernbach has said Status Quo, who were recording You’re In The Army Now next door, were briefly considered to play on the album.

5. With his parents upset by the proposed album’s title, guitarist Johnny Marr asked Morrissey to consider changing it from The Queen Is Dead to Bigmouth Strikes Again. The frontman refused.

6. Morrissey didn’t always get his way. While discussing "There Is A Light That Never Goes Out", Morrissey “suggested to Johnny that it shouldn’t be included on the album”. Given it remains a Smiths classic, Mozz wistfully acknowledges in Autobiography “it is often a relief to be wrong”.

7. Despite being the co-writer of the song, Marr spells "Cemetry Gates" incorrectly throughout his autobiography Set The Boy Free. 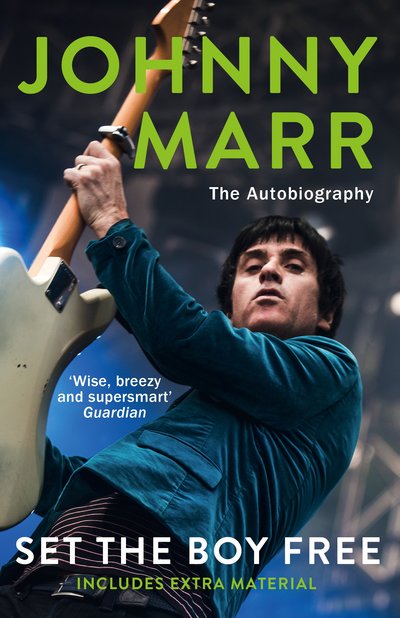 8. The cardigan Morrissey wears in The Queen Is Dead album sleeve was designed by Bodymap, an ‘80s design collective famed for their chic fashions.

9. The A side of the original LP featured the run-out groove message “Fear of Manchester”, while the B side was inscribed with “Them was rotten days”.

10. The backing vocals on "Bigmouth Strikes Again" are credited to Ann Coates, however the singer was none other than a pitch-shifted Morrissey. His chosen nom de plume was a play on Manchester district Ancoats, a location which also featured in a roadsign on the back of The Smiths’ Strangeways Here We Come album.

11. In Johnny Marr’s autobiography Set The Boy Free, he suggests the back cover image of the band was one of the shots he had requested not be used, since he was cowering from the cold. “It’s not a good sign when you’re not in control of your own image,” he said.

12. The Katharine Hepburn film The Man Who Came To Dinner offered inspiration for a number of the lyrics in "Cemetry Gates".

13. Johnny Marr’s guitar on the title track was inspired by The Velvet Underground track "I Can’t Stand It".

14. Johnny Marr and Morrissey had tea with David Bowie producer Tony Visconti to discuss his availability to produce the album, but he declined. He later produced Morrissey’s 2006 album Ringleader Of The Tormentors.

15. The recording of "The Boy With The Thorn In His Side" on the album was actually a demo, but Morrissey felt it couldn’t be topped.

16. Bassist Andy Rourke had an expensive heroin habit by the time the band was recording The Queen Is Dead, spending “a couple of hundred quid a day”.

17. With Rourke briefly sacked to deal with his drug issue, Craig Gannon was inducted into the band in 1986 as bassist. Gannon shifted to second guitar on Rourke’s return. The five-member version of The Smiths debuted on 20 May 1986 on The Old Grey Whistle Test recording of "Bigmouth Strikes Again".

18. The album was initially set to be titled Margaret On The Guillotine. A song of the same name later featured on Morrissey’s post Smiths 1988 solo album Viva Hate.

19. The cover star of The Queen Is Dead single "Bigmouth Strikes Again" was James Dean. Before forming The Smiths, Morrissey had authored the 48-page book James Dean Is Not Dead, a book about the Hollywood star. It was published by Babylon Books in 1981.

20. “It doesn’t necessarily mean Queen Elizabeth,” Morrissey has said of the album title. “There’s a safety net in the song… that the old queen in the lyrics is actually me.”

21. "Some Girls Are Bigger Than Others" references Carry On Cleo, the 1964 film starring Sid James, Kenneth Williams and Charles Hawtrey. Hawtrey later appeared on the cover of The Very Best Of The Smiths compilation.

The Queen Is Dead Deluxe Edition is out now on 2CD, 3CD/DVD and LP formats. Buy it here.