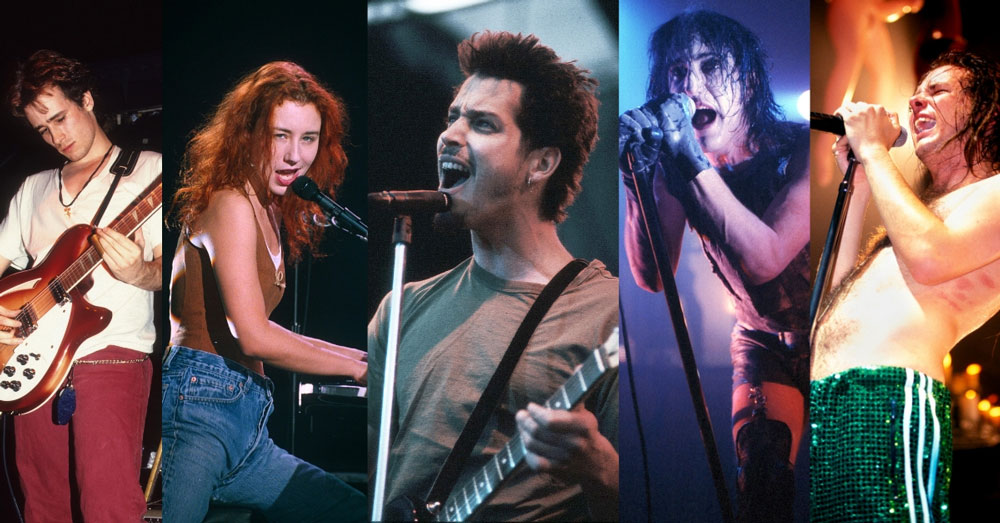 Sometimes it’s hard to believe (maybe because we’re in denial about aging) that these albums are 25 years old this year.

This list raises the discussion that 1994 could be the best year of the 90s for album releases. Pretty hard to beat, we reckon!

Let’s roll our old bones down memory lane for a look back at some of the absolutely stellar albums released in 1994. In no particular order...

Weezer (or The Blue Album) was released on May 10, 1994. In the gloom-drenched world of 90s grunge, Weezer came flying out of the gate with this absolute out and proud geek-rock, emo power pop album, instantly refreshing and infectiously catchy. Lyrically, Rivers Cuomo makes us all feel a-ok about every awkward moment in life, touching upon themes of heartbreak, jealousy, alcohol and ex’s with charming self-deprecating humour, entirely unifying for its honesty.

The music video for the album’s second single, "Buddy Holly", directed by Spike Jonze is a classic. Every Happy Days fan has dreamed of rocking the diner like Pinky Tuscadero, but the boys from Weezer actually did it (sans leather jumpsuits … thank God). Standing out in a sea of long hair and ripped denim, the nerdy satire clip went a long way to putting the boys on the mainstream map, winning four awards at the 1995 MTV Video Music Awards, including Breakthrough Video and Best Alternative Video.

The Downward Spiral was NIN’s second studio album, released on March 8, 1994. In contrast to their debut, Pretty Hate Machine (1989), The Downward Spiral is unapologetically dark, brooding industrial rock fused with elements of techno and heavy metal, notably focused on texture and space. Something that undoubtedly added to the records macabre atmosphere was the fact that Trent Reznor chose to record the album at 10050 Cielo Drive, aka "Tate House", where Sharon Tate was murdered by members of the Manson Family in 1969. He spent 18 terrifying months living and working there, perfecting the mood of morbid.

Hole: Live Through This

Live Through This was the second studio album released by Hole on April 12, 1994, one week after the death of Courtney Love’s husband, Kurt Cobain. Whilst sonically less frenetic than their first album, Pretty On The Inside (1991), the churningly catchy songs are a thrash-pop opera of urban nihilism framed by Love’s signature rage and feminist rhetoric, daring you to defy her. The lyrics and artwork reflect thematic preoccupations with beauty, motherhood, anti-elitism and violence, whilst, in a perfect snapshot of Love’s duality, the album’s title was derived of a quote from Gone With The Wind (1939).

In the music video for the single “Violet” Love paints us a picture of the perfect broken Princess, fuelled by the power of conviction as she delivers alarmingly foretelling lyrics that so eloquently sum up the story of her life, even the parts she couldn’t have possibly yet known.

Blur’s third studio album, Parklife, was released in April 1994 and returned the band to prominence with its four hit singles: "Girls & Boys", "End of a Century", "Parklife" and "To the End". The album joyously laments on the mayhem of mediocrity in a juxtaposition of past and present that perfectly articulated the mid-90s zeitgeist. An array of influences from synth-pop to hard rock shine through the lens of sarcastic pop genius, reflecting the complexities of being human with a devil-may-care shrug.
Parklife was certified four times platinum in the UK, cementing its status as a defining landmark of the Britpop genre. The music video for “Girls & Boys” is a buoyant celebration of non-binary free love, so far ahead of it’s time that it would be the perfect anthem now in 2019.

Grace was released on August 23, 1994 and is Jeff Buckley’s only studio album. Characterized by flighty, unabashedly emotional expression, Grace was not a record looking to assimilate with the post-grunge alternation. It made a jazz noise where a rock one was expected and classical in place of pop. The choice of cover songs was flawless, his version of Leonard Cohen's "Hallelujah", with its haunting mystic textures has become a modern-day hymn. There’s simply no denying that he sang the hell out of those songs - Grace was the moment it became glaringly obvious Buckley was predestined for cult stardom.

David Bowie considered Grace to be one of the best albums ever made.

Smash was the third studio released by pop-punk rockers, The Offspring, on April 8, 1994. The band had an impossibly small budget of $20,000, to play with but they didn’t let it get in the way of making a killer record. They exercised some creative flexibility, sneaking into the studio at night when it was empty to nab some extra time. Even so, the last four songs recorded for the album were laid down in just two nights.

In early 1994, Green Day blasted the pop-punk door wide open with Dookie and by the end of 1994, the Offspring had ripped it right off the hinges with their relentlessly heavy, teen pleasing riffs that captured the essence of living like there’s no tomorrow. Smash sold a staggering, record breaking, sixteen million copies and is still the best selling independently released record of all time.

The Prodigy: Music For The Jilted Generation

Music for the Jilted Generation was The Prodigy’s second studio album, released on July 4, 1994. It’s a truly trippy, rock-raving tapestry of breakbeat, techno, hardcore and oldskool jungle that slams as hard and raw as anything rock could throw at you, generating universal dance fever as it punched and kicked its way into the EDM scene. With an instinctive understanding of the big riff’s power to inspire the fist- pumping, chant-along experience of rock, Music For The Jilted Generation proved that performance, attitude and presence still had their place among the faceless world of DJs.

The Prodigy’s vision of hyper-stimulation hardcore techno pre-empted everything that is big and brassy in 21st century EDM. Every new superstar DJ with huge LED shows, massive riffs and vertiginous drops owes The Prodigy some big-time kudos.

This is pretty much where nu-metal began, and no one can say these guys didn’t work their butts off for it! Korn’s self-titled debut album hit the shelves on October 11, 1994 and by the end of 1995, the band had already played 200 dates in support of the release. Churning with rage in a heavenly marriage of hip-hop and metal, Kon was an anthem for misunderstood and introverted misfits around the world, empowering them to thrust a livid middle finger straight in the face of anguish.

At a time when metal bands were scrambling to sound more alternative, Korn reinvigorated the genre with lunging rhythms, down tuned riffs and slappy, funk-fuelled bass lines. In no time at all, a nation of disenfranchised youths started growing dreads, wearing Adidas tracksuits and worshiping at the altar of Jonathon Davis’ powerfully confessional lyrics.

Dummy was Portishead’s debut album, released on 22 August 1994 and a classier entrance has yet to be seen. They slipped into the scene with entirely a unique and undeniably cool sound that more or less defined the burgeoning trip-hop genre. Beth Gibbons sings with a smoky intensity that invokes the spirit of Billie Holiday in the midst of tremolo-soaked guitar licks, turntable scratches and unexpected jazz fusions that all come together with the intensity and suspense of a Hitchcock film noir.
A masterwork of downbeat and desperation, Dummy is sonically drenched in lushes post-ambient, blues, languid slow beats and ambient moonscapes - ferociously experimental and fascinatingly timid in nature.

Alice In Chains: Jar Of Flies

In January of 1994, we got this bloody masterpiece from the Seattle lads. Already fans by this stage, due to their Dirt album from 1992, again mesmerized by the way that Jerry Cantrell and Layne Staley’s voices meshed so effortlessly in harmony, and how emotive they could be. Not only as a dirty grunge sounding band on a track like "I Stay Away", but as a laid back dream team on a track like "Nutshell".

Tori Amos: Under The Pink

Most people remember vividly, hearing "Cornflake Girl" for the first time in 1994, and subsequently, hearing Tori Amos for the first time. What an introduction. Absolutely drawn to her and her music because of her voice, her piano playing ability, and the rhythm and structure of the song. One song. That’s all it took. The reggae vibe, powerful riff, I needed to know more about this artist, and Under the Pink was the Tori Amos album that rewarded us with stunning piano suites, a beautiful voice, and almost grunge-like nods within that piano playing.

The big single that's still played on radio to this day, "Loser", was the introduction track to Mellow Gold and for millions of people, the introduction to Beck. Track 8, "Beercan", is definitely a fav, and we don’t know how it didn’t go on to be a much bigger song.

Talk about coming of age albums! When this was released, it affected a lot of people. We all flogged the hell out of it in our cars, and we all learnt to play along on our guitars. Learn three bar chords, and away you go! Hard to beleive it's 25 years old when it still sounds so full of joyous youth.

OK, stop the press. This album was MASSIVE. Soundgarden’s 4th studio album and definitely their breakthrough in the mainstream. (Mind you, I’d suggest you go back to Badmotorfinger at least for Soundgarden’s raw best). The ‘Seattle sound’ or Grunge as it was called (though he bands within didn’t care for that moniker) was a worldwide hit, people just couldn’t get enough. Soundgarden stood out as a major player, and Superunknown became a benchmark for others to follow. Insanely developed, crafted and diverse, Chris Cornell said this about the 70 minute, 15 track album, “we didn’t really want to argue over what should be cut”. If you don’t have this album in your collection, shame on you. My favourite from the album, from the subject matter, to the riff, and that fact there’s spoons in it, is this...

By 1994, Beastie Boys were firmly ensconced in the legends category of music. That is, of all styles and genres, Beastie Boys stood tall as a band who had reached such a revered position by peers and fans alone. Ill Communication proved that they were a driving force to be reckoned with yet again, they forged their own style of rap. Instantly recognisable, never confused or contrived. Ill Communication is pure BB gold. The 70s cop/porn instrumental in "Sabrosa" is the perfect oasis in a sea of magnificence. This is the album that gave us "Sabotage", and "Sure Shot" too. Classic!

Just another example of how great 1994 was for music. This was LIVE’s second studio album, and this was the one that would launch them into the stratosphere. Over eight million copies sold making LIVE a household name and a radio stalwart. There’s timeless classics on this album, like "Lightning Crashes", dedicated to a high school friend, Barbara Lewis, who was killed by a drunk driver in 1993, the lyrical content is heavy, sombre, and powerful. I don’t think it’ll ever stop being played on radio around the world.

Brutal, emotional, political, and perfect for the time, his debut album rocked the world of heavy metal. There was a new player in town, and when "Davidian", the opening track was released as a single, the catchcry “LET FREEDOM RING WITH A SHOTGUN BLAST!” was sung loud and proud from every metalhead’s Commodore and Falcon of the time. Three of the four original members have re-recorded this album and have announced tour dates for its 25th anniversary, and we hope it comes to Australia.

Of course, there are loads more fantastic albums from 1994, but we could be here all day and night. The above are collections of music that were completely reminiscnent of the time; socially, politically and for most of us, emotionally (being in your late teens and early 20s is hard).

For more 90s anthems, check out our I Like: The 90s playlist on Spotify...