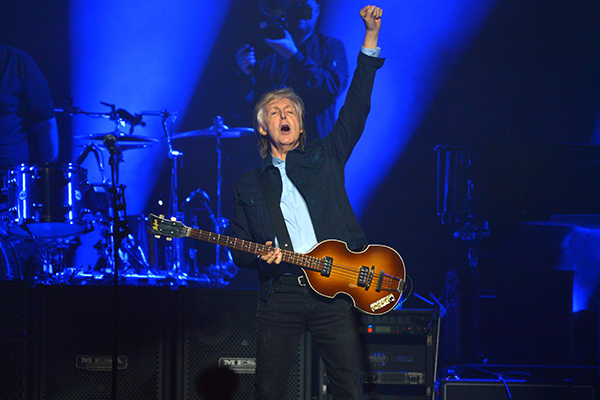 Paul McCartney, who is currently in the middle of his, ‘Freshen Up Tour’ reunited with former Beatles bandmate, Ringo Starr onstage at London’s O2 Arena to perform a surprise rendition of British band’s hit song, “Get Back”, with legendary Rolling Stones guitarist, Ronnie Wood.

“We’ve got a little surprise for you. It’s a surprise for us, actually – it only happened today.” Said McCartney, as Starr took his place behind the drum kit. Wood added his own flavour with some improvised licks during the extended the three-minute version of the tune, ending with a celebratory group hug.

On leaving the stage Starr remarked, “I don’t know about you, but that was a thrill for me. Peace and love everybody and a Merry Christmas.”

The ‘Freshen Up Tour’, boasting a lengthy, career-spanning, 40-song set, is in support of McCartney’s latest studio album, Egypt Station - his first No. 1 debut on the Billboard 200 in over 36 years!!

Tune into our Influential Brits playlist to hear more of your favourite Beatle's hits, alongside a whole cast of players who have undoubtedly left their mark on modern music.